Terminal corruption of the symbols 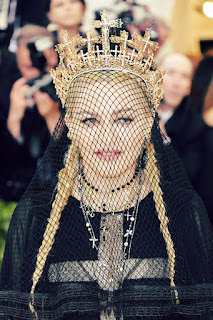 Some conspiracy theorists (and I don't mean that as a term of abuse) have long been pointing-out that the Global Establishment have a tendency to signal their presence and intent by the use of a recurrent, stereotypical 'occult' symbolism - or 'Illuminati' signs; often those associated with satanic practices.

This has - over the past few years - become so overt, explicit, and compulsive as to be difficult to ignore; although, of course, the modern mind can deny absolutely anything - and the more obvious, the more aggressively they will deny it.

The purpose of this symbolism is another matter; but that its usage is increasing very rapidly is my point here.

Alongside the increase in overtly-evil symbolism, is the subversion and inversion of Good symbolism - such as the Christian cross. In some parts of the West; the cross is now worn more often by devil worshippers than by Christians.

In mass media fictions; the presence of a Catholic priest, a monk, or a protestant pastor signals the presence of evil and the probability of a sexual predator, an assassin, or a hypocritical fraud.

Major public events are routinely staged as systematic perversions of church rituals - 'black masses' - celebrations not of Holiness; but of lust, domination, hedonism; even as real, profound, effectual rituals have almost disappeared from churches, and indeed from memory).

Another aspect is that Christian scriptures have been corrupted by so many layers of secular  'translation', and cycles of conflicting interpretation and reinterpretation - as to offer bewildering complexity and confusion, rather than clarity and guidance.

My point is that it is now possible very rapidly and thoroughly to subvert and invert ancient positive symbols; while simultaneously promoting, rewarding and awarding personalities and behaviours that have been, until recently, universally condemned and loathed.

What does this mean for serious Christians?

My understanding is that the age of Christian symbolism and ritual, so ancient and so long dying, is now finished; and that which remains is increasingly ineffective, counter-productive, actively-harmful.

What confronts us (and soon) is an era in which Christianity will be stripped of all its practices, texts and symbols - since all will be corrupted to the point of opposition; and the followers of Jesus will be all-but compelled to rely on Direct knowledge and understanding of the Good (the True, the Beautiful, the Virtuous).

Probably we will not be able even to argue in favour of these Goods, because assumptions are poisoned and the modern mind is incapable of consecutive reasoning.

We will need to rely on our own resources, our own intuitions, and our companions will be judged by the same direct and intuitive discernments.

And, since this is God's creation, since this is happening all over The West, and since God sustains us in exactly this world; Christians should accept the challenge as the best thing to teach us what we most need to learn.