Cricket bowlers should Not be allowed to target the batsman's head 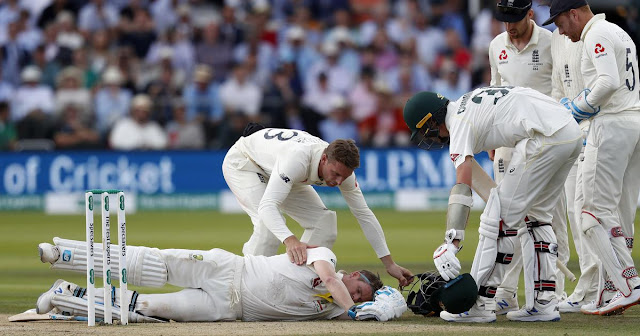 In cricket, the bowler should not be allowed to target the batsman's head.

This really ought to be common sense, because a high speed hard leather cricket ball can cause severe, permanent, or even lethal damage. But a practice has grown-up which allows this to some extent in some forms of cricket; because it can be very exciting for the spectators.

In the longer forms of the game, even a very fast bowler is allowed to bowl at the batsman's head or neck - so long as the ball bounces first.

(Bowling that arrives above shoulder height has usually not been permitted in the one-day types of cricket, or has been strictly limited. But not for safety reasons but because when a ball is very high it is difficult to score from.)

The problem of this kind of delivery was highlighted when the Australian batsman Philip Hughes was killed in 2014 by a ball which struck his neck and broke an artery. Hughes died soon afterwards.

But the damage of being hit in the head or face may be more subtle.

Edited from an article by Jarrod Kimber:

There was a five-year period from September 2014 where [Steve] Smith averaged 96.2 against seam bowling (with a minimum of 1000 runs in that period). The next best was Kane Williamson, averaging 55.8. Smith was nearly double his nearest contemporary.

He transformed from a part-time legspinner who Ricky Ponting didn't think could be a top-six player, into the greatest modern batter, and not even by a little bit; the runs he scored were incredible. Making a hundred every 2.1 Tests. His overall average in that period was 78.7. Eight scores over 150. The whole thing was crazy.

[And then Jofra Archer hit him on the neck, and things changed...]

Since September 2019, Smith has averaged 40 in Tests, which in recent times is not terrible. It is only terrible for him because he was so much better than anyone else...

Kimber does not mention even the possibility that being hit on the neck by Jofra Archer produced lasting physical damage, and was potentially the main factor in impairing Steve Smith's batting ability over the past two years - yet surely that is an obvious possibility?

After being struck, Smith was clearly dazed and had to retire for a while; and when he later returned to bat (which - medically speaking - he certainly should not have been allowed to do) he seemed functionally impaired in his behaviour.

Smith then had prolonged concussion reported lasting several days, with measured mental impairment; and he had to miss the next Test match. Since then, he has 'never been the same'...

Since Smith continues to average about 40 runs per innings, which is good, we are not talking about a gross impairment. But compared with his almost superhuman abilities before that concussion; it could be that there was some subtle and lasting damage to nerves or brain, which has been sufficient to reduce his ability from incredible to just very good.

There are also other examples of batters who were 'never the same again' after being hit in the head or neck by fast bowling - Jimmy Adams, captain of the West Indies, was hit in the face (causing broken bones) and went from being the top-rated Test Match batsman in the world to relative mediocrity.

Cricket writers always attribute the lasting effect of being hit in the head/ neck to 'psychology'; to a loss of 'confidence', a failure of nerve; but that is not a legitimate inference when there is a possibility that there has been permanent physical damage.

Maybe the degree of harm would not be noticeable in a normal person, or even a normally-competent batter - but at the very highest level of human physical attainment, among the very best sportsmen - even a little neural damage may be enough to take the edge off reaction times and/or coordination - to reduce ability from the very best to... just okay.

In other words, I suspect that the amount and duration of damage to a batsman from being hit in the face or neck has been seriously underestimated - because the possibility of permanent neurological harm from this kind of injury has not even been considered.

Of course, accidents will continue to happen. For instance, sometimes a batter gets hit on the head because he accidentally ducks into a waist high ball. But the potential for permanent physical harm can certainly be reduced by making it illegal to deliver the cricket ball to arrive above the shoulder. This would stop such bowling being used as a deliberate strategy.

It must be acknowledged that such a change would have an effect of making an aspect of Test cricket less exciting. Some of the great and memorable 'duels' of Test Match cricket involved a fast bowler targeting the head, and the batter fighting him off. The 2019 Smith Archer duel was one of these.

But, Roman gladiators fighting and killing each other were doubtless even more exciting...

In the end, cricket ought to be a game of skill primarily; rather than a 'life or death' struggle not to be smashed in the face or on the neck by a hard leather sphere travelling at 90-plus mph.

The notorious beanball pitch in baseball has the same effects. And pitching doesn't require a bounce.

@a_p - Yes, the same effect and somewhat faster - but the beanball is illegal; whereas the bouncer is a normal part of cricket.

I had no idea such viciousness was permitted in cricket. Granted, I know very little about the game, but it always struck me as a civilized, gentlemanly sort of sport (which it undoubtedly is, barring this one rather dangerous practice).

Right! I should have said 'had the same effects'.

I don't think there's been a more overhyped cricketer in decades than Jofra Archer. Yes, he had a good series in 2019 but has done nothing since then and is always injured. He seems to be a phantom-saviour figure for many fans and journalists: "If only Jofra [they always refer to him by his first name for some reason] were playing."

@Karl - I don't agree. Archer is already one of the world's best in white ball cricket, and had potential for the same at Test level - as he showed in his first couple of matches.

But Joe Root over-bowled him almost criminally in Test matches, match after match - to an extent I have never seen for a young fast strike bowler. (By comparison, Australia used Mitchell Johnson sparingly for about three spells of about four overs per innings - bowling flat out.). I think the wear and tear has done Archer serious physical damage.

If I was Archer I would refuse to play Test cricket while Root is captain - otherwise his career will be very short.

Bruce,
To what do you attribute this growth of bowling-for-the-head? Is it primarily due to the hurried pace of T20, or has it been around longer? I seem vaguely to recall that Australia’s Dennis Lillee had something of a reputation as a head-hunter in the 1970s.

@HRS - Bowling 'at the head' is nothing new, since over-arm bowling began; although it reached first fame with the 'Bodyline' tour of Australia by England in 1932-3.

Thank you. I had forgotten about the infamous Bodyline Tour!