What Tolkien's war experience can teach us about the modern world 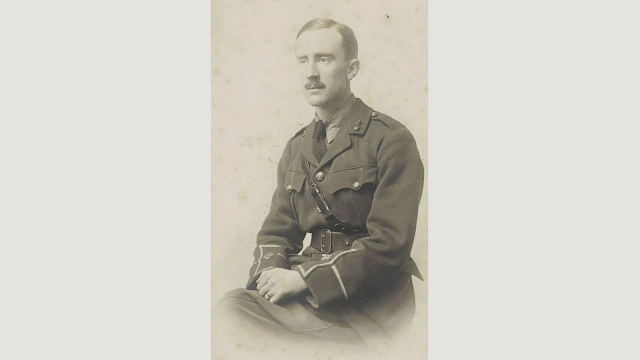 It is characteristic of those intellectuals and officers who wrote about the Great War of 1914-18, that they experienced a permanent disillusion leading to the attitude epitomized by Robert Graves's autobiography "Goodbye to all that".

In other words, the typical effect of the Great War was some combination of a rejection of tradition generally but especially Christianity; the embrace of hedonism - especially sexual, but also drinking and smoking, jazz etc.; socio-political leftisms of various types - communism/ socialism, fascism, pacifism, vegetarianism, 'green' ideas etc; an intense, tragic and paralyzing, yet guilty, nostalgia for the care-free privilege and security of the Edwardian era; and all underpinned by a bleak combination of philosophical materialism and hopeless nihilism.

But, as John Garth makes clear in Tolkien and the Great War, this did not apply to Tolkien. He was deeply affected by the war, his trench experiences, and especially the deaths of so many friends (i.e. all but one of his closest friends) - yet Tolkien was not permanently embittered nor disillusioned by the War, nor was he impelled to adopt the above-listed 'typical' literary responses.

What made Tolkien immune to this existential aspect of the war? I think the answer is quite simple; and it is that Tolkien had a deep and powerful Christian faith.

In contrast, from what I can tell, those who experienced the disillusion of the Great War either practiced a shallow and merely conventional Christianity, that rapidly and permanently collapsed under the intense and sustained psychological and physical pressures of trench warfare...

Or else they were not Christians at all, and the war confirmed their pre-existent conviction that the reality of life was nasty, brutish and short - and the only valid response was to live for today oneself, and agitate for a more peaceful, prosperous and secure society in future.

Many of the most disillusioned men were intensely artistic and aesthetic people, intensely political and reformist in outlook, and 'romantically' dedicated to a life of intense personal relationships. But they failed to learn from the fact that none of these - nor all together - were able to cope with the stresses and sufferings of the Great War.

And something analogous applied to mainstream Victorian/ Edwardian Establishment Christianity: it had been tested, and it had failed the test.

Things could have been otherwise...

Tolkien, as so often, showed the proper and effective way forward - because he was both a Romantic and a Christian.

I think the same applies to this era.

We know what has failed - now we need to seek what is both good and strong.

I remember Harry Patch in his book "The Last Fighting Tommy" saying before the war he had been an avid churchgoer but after the war he still went to be sociable but his faith had totally gone.

@MB - I don't know anything about Harry Patch - but he was a private and from a working class background, while I was thinking more of the officer class.

What I was getting at was that the war seemed to be one of the early stresses that revealed the crucial difference between being an avid churchgoer and a deep Christian.

I have seen this for myself vividly since the birdemic, with avid self-identified Christian churchgoers (and ministers) desperate to shut their churches and cease the sacraments for months, and months, and months - then continue wear face nappies and refuse the communion wine... presumably forever.

You know, I've never understood this idea about people's faith in Christianity being destroyed by World War I. First of all, warfare has been the normal state of mankind through most of history and pre-history, and it doesn't seem to have produced atheism, or cynicism of any sort. The claim, I suppose, is that WWI was so much worse than all previous wars, but I expect many intertribal and ancient wars must have been very ghastly for those who experienced them. One could claim that WWI was more pointless than previous wars, but I doubt that would withstand serious scrutiny. Second, I don't see why one shocked by the horrors of the Great War should turn against Christianity in particular. Renouncing nationalism in the wake of the war would at least make a kind of sense, because one could make an argument that the war wouldn't have happened without nationalism. (Some antinational reaction of this sort did happen, but the bigger European movement in the coming two decades was deeper into nationalism.) I don't see how Christianity deserves any blame for the war; I don't even see how the established Churches or their ministers could be said to have behaved badly during the war.

The only solution I can see is the one you give: these people were not serious Christians going into the war, and coming out of it they were looking for an excuse to drop the pretense and have fun.

Yes, most of the time through history, suffering has caused an increase in religiousness, not a rejection of it; so the high level of suffering of the trenches would have been expected to have the opposite effect than it supposedly did... But only if Men had been 'set-up' the same as they had through history. But apparently they weren't.

Interestingly, the second world war seems to have been the last time there was any (apparent) revival in Christianity in the UK. This was the era when CS Lewis (and Charles Williams, TS Eliot and Dorothy L Sayers) became household names as Christian writers.

However, it had turned around within a decade of the war ending, and by the middle sixties we were well en route to where we are now; so I don't think revival went very deep.

I have heard it said that WWI was the first time humans killed one another with "industrial efficiency"...or something like that. And coming as it did with such immediacy and protracted brutality that all illusions of growing civility and the triumph of human wisdom were stripped away. So the disillusionment ran deep and wide.

Another possibility could be because he was catholic. That fits more in the pattern I’ve seen. Because there’s another very creative guy who seemed to come out with his faith intact - David Jones. Who was also Catholic.

I also remember in ‘Goodbye to All That’ Graves mentions the absolute cowardice of the CoE chaplains but noted the amazing bravery of the catholic ones, who seemed to dart around looking for where the danger was greatest for both body and soul. Sassoon says the same in volume 2 of his Infantry Officer trilogy as do all others I’ve heard mention them.

If you want to hear a truly wonderful story of heroism and deep faith, the life of Fr Willie Doyle is astounding - especially given this level of sanctity seems to have been close to the norm for the Jesuits back then (how times change…)

It’s a long video but you can thank me later!