Ace of Wands was a very glamorous children's TV program from the early 1970s - a fantasy themed series with a leading character named Tarot: a stage conjurer whose powers were real and who solved crimes and thwarted magical villains.

It also has one of the best ever title themes - very characteristic of the early 70s (which was an extension of the late 60s):

Here is the song in full:
Ace of Wands was a deliberately trendy and cool kids programme, and left this mark. For me, the lasting impact was a desire (unfulfilled) to live in a house that had a balcony bedroom overlooking the main room, and also to have a pet owl: 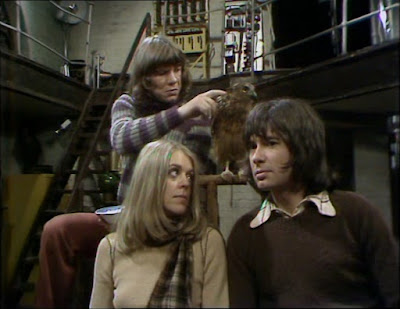 So Ace of Wands was all about glamour, about image, fashion, style... It evoked day dreams of a wish-fulfillment kind.
By contrast, The Children of the Stones was genuine enchantment. Set in a fictional Avebury, it was a Very Scary tale of ancient magic persisting in the modern world, and the battle of good and evil played out in miniature. It has a script, strong story, excellent actors, powerful visuals - and utterly compelling music. It combined references to the new science of black holes and geophysics in archaeology, and the new alternative sciences of ley lines and earth mysteries.
Its lasting effect was to do with the idea of there being more than meets the eye to life - more than materialism; that spiritual factors, ancient powers and perils are under the surface and affecting the whole.
By 1976 - when Children of the Stones was made - the national mood had changed away from the 60s hippies to include many example of what has been termed Weird Albion or Folk Horror. This was also related to a strong interest in self-sufficiency, rural life; folk music and dance; neo-paganism and folklore.
How about this introduction to grab attention and create an instant atmosphere of menace? Especially when aimed at young children just before tea time? Little wonder everybody remembers it.
The story is foreseen and summarized by a strange painting which was stumbled-across by the boy protagonist, just before he and his father went to the fictional Avebury to do some scientific research on the megaliths. Again - once seen, never forgotten: 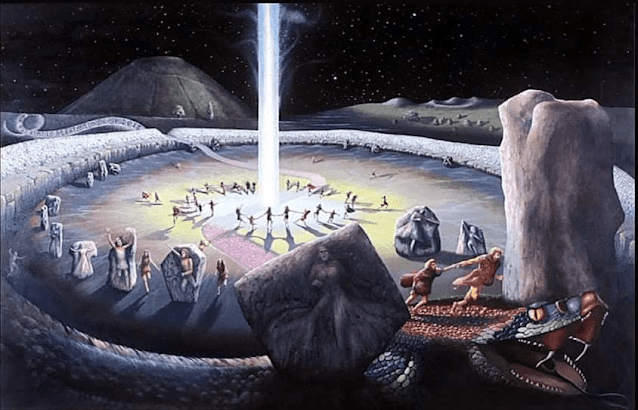 Both Ace of Wands and Children of the Stones were good children's TV, both memorable, and both were lastingly influential in the memory. But the one from an ultimately superficial and delusory glamour - while the other was a bit of genuine enchantment - which yet may prove to be deep and permanent.
Posted by Bruce Charlton at Thursday, August 12, 2021

To me some of the best enchantment movies came from Hammer studios in the 50s and 60s."Twenty million miles to earth" comes to mind as it incorporated science fiction, ancient history, mystery, warfare, and its effects in modern London with "Hobb's Lane" being a haunted street which still scared adults. Not to mention first rate acting. I could watch these types all day.

I see what you mean about glamour. I have four years on you, so had Ace of Wands been shown contemporaneously in America I would have been less interested in the owl as a pet than in the women in the backless plaid number as a girlfriend.

I saw Children of the Stones thanks to your 29 Sept 2014 post with its link to the entire series on YouTube. Brrr!

I wonder if the costume designers of Doctor Who: The Three Doctors (1973) had megaliths on the brain when they came up with the monsters for it.