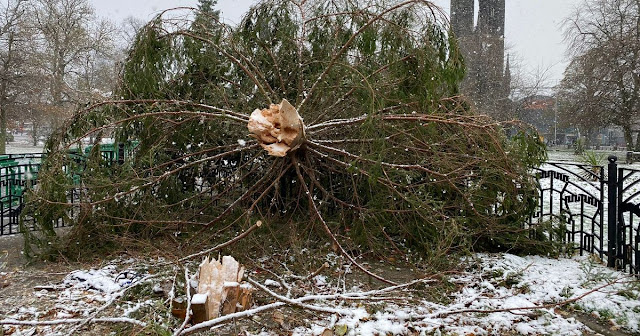 The gigantic Christmas tree, annually gifted to the City of Newcastle by the King of Norway

We have only gradually become aware that the storm from three weeks ago (named 'Storm Arwen'; apparently because of the gales of tears produced by actress Liv Tyler throughout Lord of the Rings movies) produced more damage than any winds in the North East of England in my lifetime*.

There were dozens of trees with branches ripped off, in the woodland just down our road - and several on the steep sides of the valley ('dene') were tipped right over, almost blocking the stream. We assumed that this was because the valley runs north to south, and the worst winds came from the north.

But visiting one of our favourite National Trust properties in Northumberland - Wallington Hall; we saw that a large number of trees (many hundreds) have been blown down altogether - including ancient oaks and mighty beeches - some of the oldest in England.

The hurricane of October 1987 was a good bit worse that Arwen (I visited Surry a few months later, and some woods were almost flattened); but it hit first on the South of England, and by the time it reached us in the north it was hardly noticeable. Also, the prevailing strongest winds around here come from the west (through the Tyne Gap); so I suspect that the trees were unused to attack coming from an unfamiliar direction - and had not developed root strength on that side.

At times like this, I naturally think of JRR Tolkien - that friend of the trees; and wonder how he would have responded. Walking around and surveying the carnage - which will take months to clear away; it was certainly poignant.

Yet, because it was a 'natural' phenomenon - I did not feel so sad as I would have been, had the trees been removed by the hand of Man.

Perhaps for a great and noble tree, to be snapped-off or uprooted by a strong wind is analogous to a warrior such as King Theoden falling in battle: since die we must, this is a good way to die.

Note: readers in other countries will be amazed at how not-extreme are the extreme weather conditions in England. This is true. When we have a once in a century, weather-based disaster, the casualties are numbered in dozens - not the orders-of-magnitude greater deaths seen in other places. Consequently, perhaps, our ideas of hazard have a very low threshold. The sealed-off areas of Wallington Hall where trees had fallen to block paths were labelled by the National Trust with signs warning: Extreme Danger...

If this kind of storm is so rare the region I can just guess to what factor many attribute it.