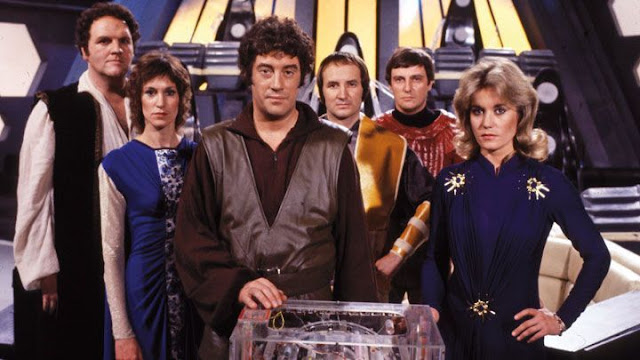 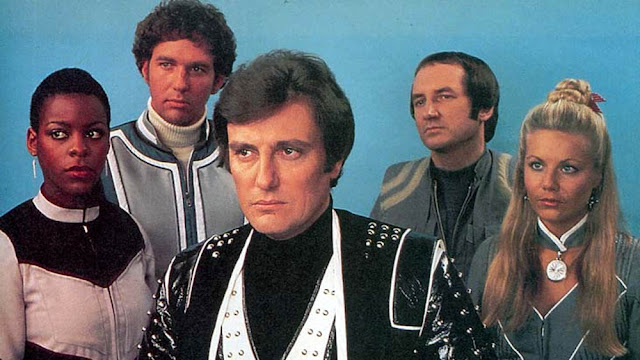 Doctor Who is undoubtedly, and by a large margin, the number one British SciFi TV programme - but number two is probably Blake's 7.

The original '7' - in the upper picture - included the supercomputer Orac (perspex box, centre-front); but over the series several members were replaced; and after Gan (big bloke, top left) died, the usual number dropped to six - with Blake 'absent' for nearly-all of the last two series.

After the impetuously heroic Blake (centre of top picture) left the group; the ultra-competent, and fascinatingly ambiguous, character of Avon (centre of lower picture) became an even more compelling lead.

In structure; Blake's 7 was a series of 'one hour' self-contained adventures for an ensemble cast, with an overall story arc; ending after four series with the death of all members of the crew. The concept and early episodes came from Terry Nation - creator of the Daleks.

I enjoyed Blake's 7 from its beginnings, and tried to watch it as often as possible - which was only sporadically, since I was at medical school at the time. Recently, I have returned to the series and set-out to watch all of the episodes, albeit not in order, and am about 3/4 of the way through.

The reason I am blogging about this show is that I have really enjoyed re-watching it. The acting and the scripts are mostly good, and sometimes excellent - and the general set-up and mix of characters is something I find very appealing.

But why I should enjoy Blake's 7 so much this time around is something I can't easily explain.

In case anyone wants to do the same; I must insert a few cautions.

Like any such series, the quality of individual episodes varies quite widely, due to having different writers. A few are just duds; and in the last series there is a run of episodes when the same villain - the vampishly seductive Servalan - is 'revealed' to be behind the plot time after time - until we are sick of the sight of her, even though she is one of the best things in the show!

The other (somewhat notorious) problem with Blake's 7 is the props and special effects, which are terrible - even for late 1970s BBC.

The reason was that the show had the same funding as a normal drama series - i.e. there was zero extra budget for special effects. It shows. But in the bigger scheme of things it adds to the fun, and does not detract from the overall effect.

But once you have got to know the team, and at its best - Blake's 7 is great. Avon - played with 100% commitment by Paul Darrow - is one of the great original characters of British TV: almost a new archetype. Vila (Michael Keating) is hardly less impressive. And the three extremely different computers - Zen, Orac and Slave (all voiced by Peter Tuddenham) are the best-ever AIs.

Note: I have also listened to a couple of series of the much more recently produced audio-drama new stories; which came from the remarkable company called Big Finish - who are best known for their many and varied version of Doctor Who. (Big Finish are currently the largest volume UK producers of audio-dramas, after BBC radio.) The Big Finish 'trademark' is to use (as much as possible) the same actors as from the original show. Anyway, these audio versions of Blake's 7 were really excellent, and I recommend them unreservedly.

I was very excited by this show back in the 1980s ("Blake 7" as I thought it). However it was hard to catch all the episodes until many years later beginning at a friend's flat. Until then I didn't even know who Blake was. Yet Dudley Simpson's title theme was so seared into my memory that without knowing his name I recognised his hand in 'The Ascent of Man' -- the kettle drums gave him away.

As you say Servalan just kept on turning up didn't she? An episode can end with, 'If our paths ever cross again, Supreme Commander' and you simply know that they *will* cross again and probably in the very next episode, no matter how far across the galaxy.

In terms of sheer epic-ness per pound of production budget nothing beats Blake's Seven!

My only quibble with the casting was the jarring replacement of the original actor for Space Commander Travis. The character changed suddenly from upper to lower class.

Blake's 7 was very dark. People died easily, even main characters. Avon, the leeringly cynical, self-serving, genius turns out, surprisingly, to be the most moral character in the show. He shows an unswerving loyalty to Blake, taking many risks in following rumors of his whereabouts, only to turn from him in horror when he discovers Blake's plan to destroy the computer network that keeps most of humanity alive throughout the galaxy, a nihilistic act of terrorism. In the end, he shoots Blake, believing him to be a traitor.

@S - Very dark? That seems like a distorted way of responding to the show, which was full of humour, camaraderie, warmth. Dark too - but not as a defining feature.

You have not reached the finale, I see...

@S - Oh, yes - I have seen the finale; which was excellent. Nonetheless... Heroic death fighting evil is not a tragedy - ask the Riders of Rohan.