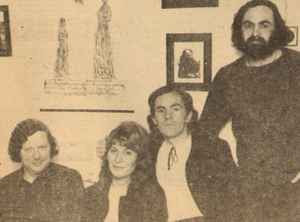 The Etchingham Steam Band was formed in 1974 by Ashley Hutchings and his then-wife the Sussex folk singer Shirley Collins. I came across them that year in two of Shirley Collins's LP albums: Adieu to Old England and A Favourite Garland Garland, which I borrowed from the Bristol City Library and recorded onto audio-cassette tapes.

Something about this four-piece line-up greatly appealed to me: Collins sang and played tambourine and hobby horse - which was a cloth horse's head with bridle and bells, mounted on a stick which could be thumped onto the stage for percussion. Ashley Hutchings played acoustic bass guitar; Terry Potter on a tremolo harmonica (an extra-long mouth organ with each hole either blow or suck, and two slightly off-tuned reeds to produce a vibrato sound); Ian Holder was on piano accordion.

This acoustic line-up was surprising for several reasons. Hutchings was the great pioneer of electric folk music in England - having formed both Fairport Convention and Steeleye Span - then the various 'Albion' bands. The piano accordion was unusual in English folk music (although ubiquitous in Scottish country dance) - and it was strange to have the mouth organ, another free reed instrument, which might appear to duplicate the right-hand of the accordion.

The reason behind the band was related to Ashley Hutchings dropping-out of touring and taking a break to refresh and restore his enthusiasm. He named the band after the Sussex village he lived in, and recruited the musicians locally (from Horsham nearby, I seem to recall). It was a 'steam' band because it did not need amplification, and this was related to 1974 power cuts and electricity-rationing, relating to a coal miner's strike.

There was also the fact that I myself was playing the piano accordion - and could also play a bit on the tremolo mouth organ; while my musician friend Gareth played bass guitar (albeit, electric bass - as well as the transverse flute) - so that we could produce a simulacrum of the Etchingham sound: especially if I played the mouth organ held in my right hand, while playing the accordion bass with my left!

The particular track that grabbed me was the below compilation of two harvest songs and two jigs. I learned this and, I think, performed some version or another in a lunchtime concert done at school by myself and some friends. I have continued to play this grouping ever since on piano accordion and melodeon - and am currently learning it on the anglo-concertina.

If you liked this sample of the ESB - more good stuff can be found on YouTube - such as this.