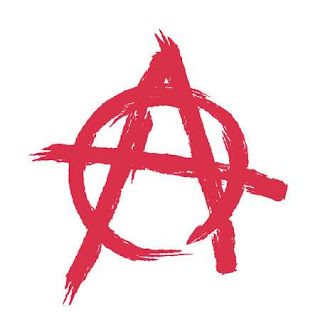 There is a small but relatively impactful group of people on the Left of the Left who have various self-identifications; but could be termed the 'anarchist' Left, because their focus is on power (rather than Old Left economics or New Left culture).

The Anarchist Left are, indeed, close cousins of the 'Right wing' Libertarians, in terms of their general analysis and aims; the main difference is that the Anarchists are anti-markets and instead pro-participative-democracy. Being secular and anti-Christian by assumption; both Anarchists and Libertarians favour the sexual revolution, and line-up against marriage and families.

The best known living representative is Noam Chomsky, and George Orwell was also sympathetic to this kind of Leftism - but there are quite a lot of these people in academic positions, education and the media. I would have counted myself among them for a few years - they were thin on the ground (I don't think I knew anyone else, personally), but produce quite a lot of words - and can find an outlet as ideological 'purists' on mainstream Leftist platforms. When I was of this ilk, I had no trouble publishing my stuff, and spoke at some high level conferences.

The Anarchist Left is mainly about opposition; and in principle believes that policies should emerge from a grassroots consensus. In practice, they always support the Mainstream Left against the Mainstream Right; which is why the Anarchists are tolerated, and indeed encouraged, in a small way (e.g by small subsidies and grants, and low-level jobs in the media and academia) - by the Establishment.

The Anarchists are, I would say, as individuals; considerably braver and more principled than the Mainstream. They have to be, because they are usually working pretty much alone, or in nooks and corners, and have neither wealth nor status to defend themselves.

The Anarchist Left are going-nowhere, indeed they have no idea where they would want to go - except tagging behind the Mainstream, complaining - but they are potentially dangerous (because of their courage and principle) and therefore pretend-opposition/ covert-support is the best way of neutralising them, the best way of buying-off a dedicated partial-opposition.

But this true and rare insight is negated by the fact that the Anarchists trace bureaucracy back to The Market and to Capitalism - which is partially true, but essentially false; since there was not much bureaucracy in 19th century in the UK or USA, when Market Capitalism was in its rawest and purest form. Bureaucracy is, obviously, driven by Leftism, by State power - it is a consequence of a Leftist ideal of Government control (in order that Government be powerful enough to do good Things).

And the single linked bureaucracy that dominates the developed world is a product of high-minded Leftist ideals (such as World Peace, Climate Control, Equality, Humanitarian Aid etc); far more than it is a product of the evil desire of Capitalists/ Bosses to make ever-more money.

And what makes the Anarchist Left such a Dead End, a free-spinning cog, is essentially that they are atheist - which means that nothing they think, say, or do really has any validity or makes any objective difference; they are living in a fog of incoherence and nihilism.

The main benefit of the Anarchist Left is that they (like Libertarians, like the Conspiracy Theory movement) provide a partially true unmasking of the mainstream System. There main disadvantage is that they fail to expose and evaluate their own ultimate (metaphysical) assumptions about the nature of reality - and therefore remain mired in futile atheism.