Why I smashed the television 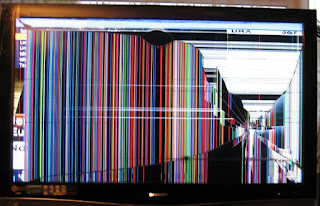 The other day I knocked-over the television and it landed on something sharp which smashed the screen - although with a modern TV, with a thin screen made of some kind of plastic stuff, you could only see the smash with the power switched on. A rather horrible sight.

The cause was a stupid random mistake - a foot wrongly placed, a momentary loss of balance... But no the mistake wasn't random, but almost inevitable - the 'accident' was the culmination of a series of determined haste, unforced errors, unnecessary compromises, a perfect storm of the interaction of my attitude and cumulative care-less-ness.

I had a lot of chores to do in a limited time; and I did them by taking an antagonistic attitude towards the world - it was me against that world. I literally as well as metaphorically 'put my head down', closed-in on myself, kindled my will - and attempted to cut a swathe through the tasks ahead.

I was busy, I was in a hurry - pushing to complete one after another thing. I had to move the TV away from the job I was doing, but I didn't move it far enough. I needed to stand on a chair to reach the curtain rail - but I didn't quite get the chair to where it ideally ought to be - because the TV was in the way. I unclipped the curtain in an irritated and hasty mood, because I was having to re-do it.

I stepped backward off the chair; felt a bump and heard a crash.

Because I had set myself against the world I was deprived of that harmonious cooperation with the world which is the only thing that gets us through the near-infinite hazards and pitfalls of life - perhaps I even antagonized the world (not all objects are benign - some are just looking for an excuse to get us - some are even more irritable than I).

It has happened before - no doubt it will happen again: it is all about attitude. When I feel 'hassled', rushed, over busy, tired... and am pushing and pushing to impose my will on recalcitrant reality: that's when 'accidents' happen - and the worst ones, the irrevocable ones that cost far more than the price of a new TV.

When will I learn to recognize that mood? - and instead of doubling down and closing-off - to ease my foot off the gas, open my senses and my self to communication with the world - to perceive the proper and harmonious path through reality rather than trying to hack my way through the densest part of jungle with a blunt machete wielded with unhelpful urgency by tiring, uncertain, uncoordinated arms?

P.S. The illustration is not of my actual TV, but it looked pretty similar.
Posted by Bruce Charlton at Wednesday, November 11, 2015

Are you sure your ideas about the Satanic nature of the mass media didn't play a subconscious role in this "accident"?

Maybe it was a blessing in disguise Bruce. Logie-Baird's gogglebox is after all one of the principle instruments of the adversary's strategy to use Media to marinate our minds in evil nonsense...Perhaps an Angel knocked it off when your back was turned ;-)

@WmJas - No - Because I use the TV mostly to watch cricket - and I am confident that God loves cricket.

@David - If so, the angel miscalculated; because I immediately went out and bought a new (and better) replacement...

When I saw the title of this piece, I immediately assumed you had deliberately smashed the TV in a fit of rage at the inane propaganda, lies and evil that is generally broadcast out of it. I have almost done so a few times myself.

Many an evening I switch on the box, only to frantically reach for the off button as soon as some inane misinformation is being peddled.

@Mis - Yes, I'm afraid that was a deliberate strategy of mine to mislead readers into reading a disguised 'spiritual uplift' posting - irresponsible click-bait...

I can't usually find anything I like watching on normal TV - and most of it actively hate.

But often there is one series I follow per week - at present it is the adaptation of Phillip K Dick's Man in the High Castle.

Plus I watch children's TV for relaxation (*mostly* with my kids...): Stephen Universe and MLP are the current favourites; and in the past we have regularly viewed things like SpongeBob, Phineas and Ferb - or as they reached their teens nerdy sitcoms such as The IT Crowd or Big Bang Theory. But we still like the kid's stuff.

At our house we noticed that the new computer monitor was better than the existing television, which we accordingly scrapped. Now when we are ready to watch a movie, we first move the piano bench to a position near enough to the desk (in the adjoining room) so that the monitor can be placed on the bench, and if I have misjudged how far I can make the monitor cables stretch, another pair of arms must be summoned to slide the piano bench under the spot where I am holding the monitor.

@Bruce, while I don't have children of my own I watch kids shows a fair bit with my nieces and nephews.

I watch Big Bang Theory quite regularly. It is not particularly good, but compared with how awful much of the rest of the TV content is, it is somewhat palatable by comparison.

No - Because I use the TV mostly to watch cricket - and I am confident that God loves cricket.

Glad you didn't have a fall yourself! Be careful!

You and I share that particular tendency Bruce. Luckily nothing particularly expensive has bitten the dust of recent. Frustration and a time crunch can bring that out.

On the other hand, you may wish to frame that television in your work area. It is it's own reminder and oddly quite artistic for an accident. I like the recursive quality,make it a very original piece. Nice bit of creative destruction there.