How to be convinced and certain of the reality of God

It is, in principle, very simple.

We will therefore need other certainties in the future (which is to say that effective faith must be a living faith.)

What you need to do is to start with some-thing/ any-thing (some subjective state - perhaps from an event, a picture, music, story, imagination...) that spontaneously seems to you in the here-and-now to be evidence of the reality of God.

Then contemplate that thing while asking the question of your innermost heart (nothing being more fundamental than this) whether it feels true.

If it does - that is certainty; because nothing is more fundamental than the evaluation of your innermost heart.

(It is not factual certainty, and what that certainty means will be incomplete and imprecise, because we are constrained Men. But that is certainty of the existential fact of God's reality. No more certain thing is conceivable - except that that certainty should be a permanent and unvarying state - something which is often,  in practice, not possible among the vicissitudes of  mortal life, but is at least conceivable in another state and place.)

The Unknown Watcher
The understanding elder Being is very patiently watching over the younger one who is seen reading his paper and oblivious to the Divine Person so close.

We can realise how quickly this Divine Person will respond to the younger one immediately the younger makes a move to build a friendship of affection and understanding between them. 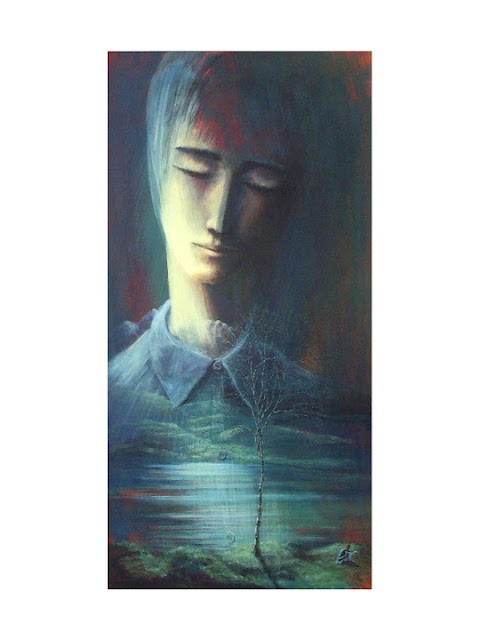 From: http://www.billarkle.co.uk/greatgift/pictureseq/fset008.html
Posted by Bruce Charlton at Monday, January 18, 2016