Gollum now has the ring (and it's better that way, in the end) 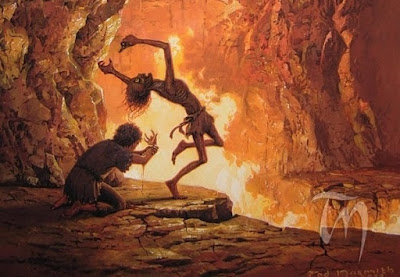 The worst case spiritual outcome of the recent global totalitarian coup would be a transhumanist-flavoured technocracy of centralised monitoring, surveillance and control - in which life was understood in a wholly materialist fashion, and the highest human value was feeling-pleasure-now; and the greatest moral imperative was the avoidance of immediate suffering (biological-death being seen as preferable).

It is perhaps in order to prevent such an outcome that God has (apparently) allowed ultimate power to fall into the hands of those who look no further than their own glee at their own power - and who will, consequently, pull-down the Global System on their own heads (as a consequence of maximising their petty desires with no regard for the future).

Having crushed the world (excepting themselves) under universal house arrest, deprived of most sources of fulfilment and basic human satisfactions; the Gollum-like glee of the Global Establishment in contemplating this situation of mere possession of power, can see no further than more of the same.

Gollum with the ring is small-minded spite on steroids, supercharged, to the power of ten... The petty spiritual stature remains, only the power to gratify it has been enhanced. That's what we are seeing.

Yet... Just as it is Gollum's petty greed that saves the world from the much worse fate of Sauron possessing The Ring of Power, so - it seems - it is the Gollums of the Global Establishment, who see no further than gratifying their own thrill at more-and-more lock-down and social-distancing for longer-and-longer; that will destroy the technological infrastructure along with 'the economy' and all other large-scale organised activity; and thereby save the world from something that is spiritually much worse.


Note added: Petty selfish short-termist gratification is, indeed, the terminus of all evil; the chaotic scramble of each against all, until one remains who can only kill himself from hatred of creation.

The paradox of evil is that it depends on virtue to be effective. Thus Saruman's Uruk-Hai are obedient and loyal, hence much more effective in abducting Merry and Pippin than Sauron's orcs who simply want to torture and eat them.

The paradox is that obedience and loyalty are virtues that allow long-term strategies; but as evil succeeds and progresses (as it has in the Global Establishment over recent decades), these are undermined by more evil competitors who seek shorter-term tactical and more selfish goals.

This can be seen both in history and in the modern world - it has been very evident over the past several decades. It is a moral version of Gresham's Law - that in a world of evil motivations, the worse drives-out the better; until all value is destroyed.

Note on the Note - We need to recognise that evil is extremely powerful, but it is not all powerful; and precisely because its desire for power is insatiable, at any given time evil is over-extended in the sense that most of its power relies on willing cooperation from those who are much less-thoroughly evil than the leadership.
Posted by Bruce Charlton at Friday, April 17, 2020

This is great insight - one I have struggled to come to terms with myself. Having the Gollums of the world triumph appears counterintuitive and counterproductive at the purely material level of pleasure and comfort. After all, what pleasures or comforts could possibly remain if their short-sightedness and wickedness collapses everything?

In this sense, the implementation of Sauron's bureaucratic order seems more desirable because it would, in theory at least, allow for the continuity of comfort and pleasure. But this comfort and pleasure would be illusions. If Sauron triumphs, freedom perishes. Everything is rendered to the mechanical level and we are all reduced the piano keys.

On the other hand, the Gollums might destroy comfort and pleasure, but they will not destroy freedom. In this sense, having the Gollums succeed is indeed preferable spiritually.

Once again, great insight. Nonetheless, it remains a difficult thing to come to terms with.

@Francis - Thanks. Tolkien saw more clearly than most that the worst outcome would be if Gandalf or Galadriel were to take the ring; since the mixture of high ideals and insidious corruption could go much further than Sauron - "All shall
love me, and despair".