King Edwin of Northumbria and the sparrow's flight 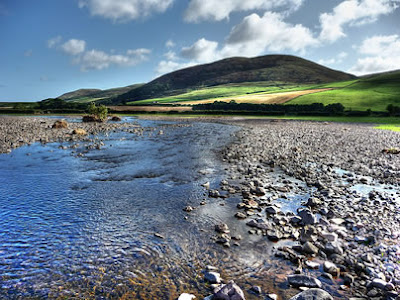 Yeavering Bell, the Northumbrian hill upon which King Edwin's palace was located

O king, it seems to me that this present life of man on earth, in comparison to that time which is unknown to us, is as if you were sitting at table in the winter with your ealdormen and thegns, and a fire was kindled and the hall warmed, while it rained and snowed and stormed outside. A sparrow came in, and swiftly flew through the hall; it came in at one door, and went out at the other. Now during the time when he is inside, he is not touched by the winter's storms; but that is the twinkling of an eye and the briefest of moments, and at once he comes again from winter into winter. In such a way the life of man appears for a brief moment; what comes before, and what will follow after, we do not know. Therefore if this doctrine [Christianity] offers anything more certain or more fitting, it is right that we follow it.

Text can be found here, with an Old English version, and links to the original in translation from the original Latin in The Venerable Bede's history.


The above parable was, so Bede tells us, how Anglo-Saxon King Edwin's counsellor explained the advantages of the new religion of Christianity; leading to the King's conversion from paganism.

One thing that strikes me about the sparrow's flight as a metaphor of the human condition, is that it gives equal emphasis to pre-mortal as to post-mortal life. The 'mystery' includes what comes before, as well as what comes after; and the implication is that Christianity provided answers to both sides of the question.

What is interesting is that mainstream modern orthodox and traditional Christianity does Not (at least in its official theology) offer any information about what came before this mortal life; because it regards each person's soul as being created by God, from nothing; usually happening at some point (there is disagreement) between conception and birth.

By contrast, the sparrow story has the soul flying-into the hall of our brief mortal life from somewhere else - before flying out again. This makes me wonder whether - at that time, and in that place - Christians assumed that there was a pre-mortal life of the soul - that, in other words, we each already-existed in another form and/or place before our conception or birth.

Among large modern denominations, I think only the Mormons adopt this same three stage view of life as divided into pre-mortal, mortal, post-mortal phases.


Another aspect of this story is that it seems to reveal as a pagan assumption that the soul did indeed survive death - but that the pagans were unsure of what happened. What King Edwin's counsellor was saying was partly that Christianity told us more information about the soul after death - but (in the text which follows the above excerpt) - "such truth evidently appears in this preaching as can confer on us the gifts of life, of salvation, and of eternal happiness".

Thus life, salvation and eternal happiness... But to the typical modern mind; Christianity is mainly about morality, about converts following a specified lifestyle in order to save them from damnation due to sin, where sin is regarded as evil moral transgressions.

For example, CS Lewis believed in God and Jesus before he believed in life after death (he says that belief in the afterlife followed many months after his adult conversion); and in general it is considered to be a kind of cheap, dumb pandering for Christian evangelists to focus upon the offer of 'eternal happiness'. It sounds to moderns like 'wishful thinking'.

Yet here, among these tough pagan warriors, the list includes 'life' and 'eternal happiness' along with salvation - so the emphasis of the teaching is on living forever in happiness as the gift of Jesus.

This, indeed, is the teaching of the Fourth Gospel - where sin includes - and is mainly about - death and annihilation of the conscious self (i.e. the Sheol of the ancient Jews, or the Hades of the ancient Greeks). And salvation from sin therefore mostly means saving us from the extinction of our-selves that otherwise follows death.


It is my conviction that the root of modern Man's nihilism and demotivation is our belief that mortal life is everything; and that the most important Christian message therefore ought-to-be that Jesus offered us the possibility of Heavenly Life Eternal.

This requires that modern Christian evangelists give a description of the nature of Heaven, in order that people can decide whether or not they want it.


All this suggests that modern Christians should be a lot more specific about 'eternal happiness' than was the case when CS Lewis was writing.

Of course, different Christians (and different Christian churches and denominations) have different ideas concerning the nature of Heaven; but that can't be helped. Vague hand-waving about the abstract happiness of an abstract Heaven will not suffice nowadays (if it ever truly did, for most people).

The modern evangelist should give his own understanding, as best he can; and with whatever justifications he truly has. Then the potential convert can discern the truth of what he has been told; by whatever means he regards as most valid.

Christian evangelists might consider focusing on this core and primary aspect of Jesus's teaching - i.e. his gift of resurrected, everlasting Heavenly life - instead of secondary and derived behavioural aspects.

First things should be put first, or else the secondary issues will never even arise.

Very interesting! I’ve long been familiar with the sparrow story but had never made the connection with premortal life before.

@Wm - Given that Bede was a very Roman Christian (rather than the more mystical 'Celtic' type, who were less theologically orientated) it is perhaps surprising that he did not comment on this - or maybe, as Terryl Givens argues, a belief in pre-mortal life has always been present as a minority element, even among orthodox mainstream Christians.

Thanks for this. Was that the advisor the same one, who once he became convinced of the truth of this new king, Jesus, burnt down the pagan temple near Ledis?
I love this story. I find it very 'real' and raw as was life for the average Northumbrian. Death was much nearer (see the story of Lilla, whose cross can be found on the moors above where grew up in Whitby and Sleights). I believe the Anglo-Saxon Northumbrians held similar beliefs to their cousins in Denmark and Sweden - Woden/Odin, Thor etc and Valhalla and Hel (not the same as the Christian Heaven - good Hell - bad). It also ties in with similar observations in the Old and New Testaments that the life of men is like the frass or flowers of the field - here today, gone tomorrow.