Cat People - is this the most important Mammal Right's issue of today? 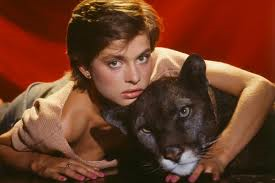 You may think that the plight of people who believe that they are really cats is rare, and that such people are deluded - mentally ill. Deserving of pity, but not entitled to agreement.

In fact you might imagine that to agree with a deluded person may be to harm them - to encourage them to self-destructive extremes.

You may feel that the when somebody believes that he is a cat, this is just plain false; and that extensive body modifications do not change that fact - and that this would apply even when such people behave as they suppose a cat behaves, and that it would apply even if their internal physiology was modified with 'cat hormones' or some other chemical.

You might even suppose that - merely because it is factually false, therefore you were free to deny that such people really were cats; or that you were entitled to assert that it was better not to be a person who falsely believed he was a cat.

You would be wrong.

IN FACT (if you really think about it) people who believe they are cats are correct (in the ways that really matter); and therefore only a hater would deny it.

After all, there is no hard and fast line between cats and humans; the biological definition of 'species' is controversial, and poorly defined, and there is a grey area between so-called species, and hybrids may occur naturally or be created by scientists, and these may be fertile...

Plus there are many similarities between 'cats' and 'humans': both are mammals, both like fish, some 'cats' live in houses and some 'humans' live in the woods...

The difference is better perceived as a continuum and a matter of choice.  If a 'cat' chooses to self-identify as a 'human' (or vice versa) this is their basic Right and an equally-valid decision as conventional species-ism; and it is an act of hatred to say otherwise.

You may also suppose that 'humans' who believe they are 'cats' are rare - but you would be wrong about that!

Many such people are too oppressed to acknowledge their feelings and beliefs about cat-hood, too afraid of the vile hatred of those who insist on rigid species boundaries and the impossibility of crossing them.

(Probably) when children and adolescents are directly questioned by teachers, social workers, media reporters and authority figures, they would admit to sometimes 'believing' they are a cat, wishing to be a cat, playing cats in role play games, liking pictures of 'cat people', or having at some point  had a crush on Nastassja Kinsky (see above - she is the mammal on the left of the picture) - these people (grouped together) are counted as 'unsure' about their species; and should probably all be regarded as (in reality, secretly, too afraid to admit it) wanting to be cats and indeed covertly believing that they are cats - if only the cruelty of conventional society would allow them to express this.

THEREFORE in future any 'human' who self identifies as a 'cat' must be agreed with, must be treated as a cat (and vice versa, of course), and anyone who is accused of suspecting otherwise - or who does not offer Cat People privileged status and conditions... in fact anyone who does not sympathise with, praise, laud and worship Cat People to high heaven at every possible opportunity...

Well, any such person should by Law (and more importantly by bureaucratic practice and trial by mass media) be subject to severe and open-ended sanctions up to and including mob ridicule, sacking, fines, jail time and violence (and, with a bit of luck, they might be induced to kill themselves - which would be no worse than what many/ some/ a few... or at least one Cat Person (actual or plausibly-possible) has had to endure from the hatred of conventional society).

Wow! I didn't know that back in the days of... 2012, Western societies were so unenlightened that Cat People were tortured to death. We don't want those dark days to return, do we? Evil must be vanquished now, once and for all.

To those who have an urge to treat this as purely a joke, 'otherkin' are certainly a thing:

Thankfully, corresponding surgeries have not been devised.

It is obvious that these conditions are the invented product of misdirected desires. Given the extent of fascination with the My Little Pony children's show with the unexpected demographic of the older-disillusioned, I am pretty sure, by the standards according to which such conditions are promoted, there are people out there suffering "human/pony dysphoria". This in spite of the fact that MLP ponies are a species that was invented out of thin air less than a century ago, and (apart from irrelevant details like hooves) probably bear more resemblance to Tolkien's elves and hobbits, in essence, than they do to any form of equine actually existent on Earth.

The implications of this are less obvious. Even desires that spite God are not invented out of nothing; and what is the original valid basis for a person demanding that reality be turned upside down to accommodate their wish to be a cat, or a pony, or the opposite gender, or whatever other thing besides what they currently are? I would say there is certainly an element of Sennsucht to it (what a fallen person is, is quite miserable and different from a redeemed person, and so it is understandable at least to want to become something else -- without quite having any idea of what), but this element has become particularly, horrifyingly sour and curdled. There is also clearly an element of magical thinking, a focus on attaining the form and appearance of something, rather than the essence of it. Beyond that I am not necessarily the best to speculate.