Note: The sublime aria begins at 4 minutes - up until then is recitative.

Kenneth McKellar was treated rather as a joke in my childhood - a Scottish chap who wore a kilt and sang patriotic songs to old people... 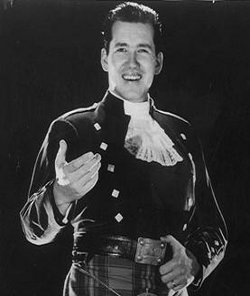 But he was perhaps the finest British tenor of his generation - indeed conductor Sir Adrian Boult stated he was the greatest Handel singer of that era (Boult being the premier Handelian). But McKellar did not like the life of an opera/ oratorio singer, and quit to became a middlebrow concert artist.

What made McKellar such a superb singer was very simple: primarily the quality of his voice - as is the case with most singers - he just had a lovely clear tone. But his intonation was excellent, the phrasing was highly lyrical - although unobtrusive, and his technique was strong without being spectacular. His pointing of word meanings was also exceptional - although, again, subtle.

But the general public will always recognise a singer whose voice is beautiful - especially a tenor, which is a rare voice where vocal beauty is even rarer. There is an inbuilt thrill of being toward the limit of the natural range, with the constant danger of 'cracking' to worry about and add frisson, particularly when the singer uses an open-throated style of production, like McKellar.

At the opposite end of McKellar's achievement is his unaccompanied version of the Irish song - She moved through the fair. This puts a microscope to his technique and musicality - it is hard to listen without tears.

This is the essence of ballad singing, and would have been loved by any people at any point in history - in ancient Greece or modern New Zealand, around the camp fire or in the Lord's great hall, in a bothy or a palace - McKellar was a true 'bard'.

Thank you, I really like your posts on music. I had never heard of him before, but Kenneth McKellar's folk renditions are very moving. The operatic work sounds very good too, but it's easier for me to appreciate the folk music.

What extraordinary performances! Thank you, Bruce.