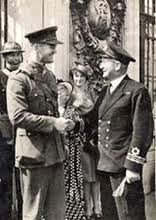 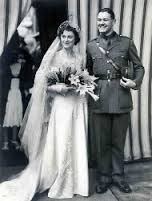 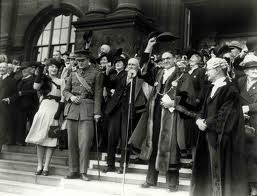 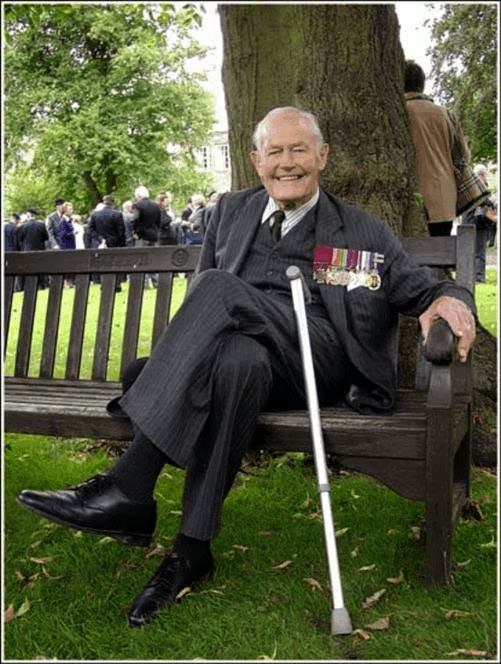 I like to visit the Durham Light Infantry Museum - and always pause to re-read the display dedicated to Richard W Annand (1914-2004) who in 1939 was awarded the first Victoria Cross of World War Two.

I never fail to be moved, and deeply moved, by the words and pictures which stand in memory of this man.

Annand was something close to the Victorian English ideal of a hero and a gentleman; in that he was valiant, compassionate, and withal utterly modest: my admiration is unbounded.

1. Look at the man's face - a boyish openness of expression, almost innocent, from the earliest pictures and retained into extreme old age.

2. In the citation below, note the extreme ferocity and also the military effectiveness of his fighting. That it was not a single act done in the heat of battle but repeated acts of heroism - in despite of accumulating injuries and exhaustion.

3. Yet also the loyalty, affection and self-sacrifice returning to the battle ground - after all this - to try and save his 'Batman' (military manservant).

4. Finally, the complete absence of boastfulness, reluctance to talk about his heroism, fundamental decency of character.

Shortly after dawn on 15th May, the assault began when mortar fire hit "D" Company's position near the ruined bridge, badly wounding the Company Commander, Captain Bill Hutton. The main German attack across the river then fell on 16 Platoon and Second Lieutenant Richard Annand.

"About 11 am the enemy launched a violent attack and pushed forward a budging party into the sunken bottom of the river. Second Lieutenant Annand attacked this party but when ammunition ran out he went forward himself over open ground, with total disregard for enemy mortar and machine-gunfire. Reaching the top of the bridge he drove out the party below, inflicting over twenty casualties with hand grenades- Having been wounded he rejoined his platoon, had his wound dressed, and then carried on, in command."

At the same time, German troops used a weir to cross the river and overran a platoon of "B" Company. After a desperate fight, this attack was halted but the Germans were not pushed back across the Dyle. The fighting continued until noon with neither side being able to overcome the other. During the afternoon, snipers, mortars and shell fire forced the Durhams to stay under cover. They all knew that the Germans would renew their attack that night.

As it grew dark, the Germans, under cover of intense machine gun and mortar fire, again attacked the ruined bridge in front of "D" Company.

Platoon Sergeant Terry O'Neill, who lost his right arm in the battle, later explained -"Our position on the south side of the River Dyle was at the bottom of a long forward slope with a large wood [o our rear. The road leading to the bridge which had been destroyed was alongside our left hand section and the ground between the bridge and our own position was perfectly open. On the night of 15th May, Mr. Annand came to me at Platoon Headquarters and asked/or a box of grenades as they could hear Jerry trying to repair the bridge. Off he went and he sure must have given them a lovely time because it wasn't a great while before he was back for more. Just like giving an elephant strawberries."

And Company Sergeant Major Norman Metcalfe, also of "D" Company, later wrote to Captain Button about the night attack -"In they came with a vengeance and weren't' they socked with a vengeance..... They seemed determined to get that bridge and therefore reinforcements were simply piled up with casualties..... Jerry couldn't move old 'D'! We had casualties, especially 16 Platoon, but they were wonderful. Mr. Annand, Batty, Wood, Surtees -they just went mad. Jerry got up to the other side of the bridge to their sorrow; they must have thought they had demons in front of them..... For two hours it was hell let loose, and then Jerry gave it up and withdrew."

The Durhams continued to hold their positions, but elsewhere the Germans had broken through. Finally, at 11pm, Lieutenant Colonel Simpson gave his hungry and exhausted Companies the order to withdraw from the River Dyle. There was to be no transport. Anything that could not be carried would have to be left behind.

As Richard Annand led the few survivors of his Platoon away from their position in the early hours of 16th May, he learnt that his batman, Private Joseph Hunter of Sunderland, wounded in both his head and legs and unable to walk, had been left behind. Second Lieutenant Annand, despite his own severe wounds, immediately returned alone to the deserted trenches and found the missing soldier. Helping his wounded batman into an abandoned wheelbarrow, he set off up a forest path after the rest of his battalion.

All went well until they came to a fallen tree that completely blocked their way. Weak with exhaustion and unable to lift the wounded soldier over the obstruction, Richard Annand was forced to leave Joseph Hunter in the shelter of an empty trench by the side of the track and go on for help. When he finally reached his old Company Headquarters, it was deserted. Using his last reserves of energy, he set off again to look for help and was eventually found by one of 2 DLI's surviving Carriers commanded by Second Lieutenant Hugh Lyster-Todd.

Only then did Richard Annand collapse unconscious through loss of blood and exhaustion.

..."I don't suppose he knows the meaning of the word fear'. He never asked a man to do anything he could do himself...... He wouldn't talk much about it. He isn't that kind. It was just another job of work to him." [Platoon Sergeant Terry O'Neill]

Your earlier posting today was dedicated to Venus. Now it's the turn of Mars.

Well, my friend, it's funny, isn't it, that the posts containing "hot-button" trigger words are usually the ones that garner the most comments (and as often as not generating more heat than light), while the more muted, less controversial topics are almost commentless. It's too bad, because at the present time posts like this one are my favourite sort, and in fact if I were writing a blog again *most* of my posts would aim to be like this one - leaving aside the stupid controversies of the present day and instead firing the imagination with thoughts of people, and ages, that were better.

A remarkable man, isn't he - at least, he seems to be, from the perspective of our own era? I am so glad that you made the point about the "boyish, innocent grin". It reminds me of one of my favourite lines from all of the Narnia stories, probably forgotten or not even noticed by most readers, but it's from Prince Caspian, near the beginning, when the author is describing the dwarf Doctor Cornelius, and mentions that he was stern yet with a "twinkle in his eye" that lets you know that inwardly the dwarf is full of the joy of the Lord. Indeed I appreciate that you constantly make this point in various blog posts, that we are *meant*, on some level, to be child-like. It would be almost impossible today to find someone with such child-like innocence held up as an exemplar of "manliness". The prevailing idea is that "real men" are incompatible with child-like innocence, trust, joyfulness...

... or sexual continence, by the way. I think I've lost count of the number of men, for example, put forth as "heroes" or "examples of masculinity" by the modern media, who I've initially taken a liking to because they seem strong, fatherly, somewhat traditional, who turn out to be full believers (and participants) in the sexual revolution. Somehow or other I would wager a large sum that Mr. Annand was faithful to one wife, as was common in those days. One of the reasons I enjoy British literature of a certain age, and indeed this blog post and the photos therein, is that they feature a complete absence of the "everyone's doing it" cynicism that drenches most everything today.

Sorry for the rambling. I just think that there are a lot of us today searching for men you can believe in.