The cause of quaffing 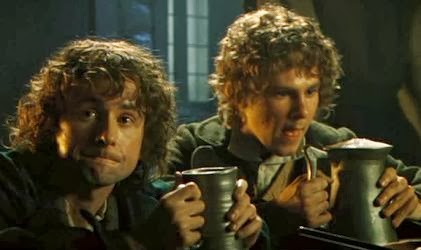 Quaffing is, according to Terry Pratchett, like drinking - only you spill more.

Alternatively, it is a form of drinking where more ends-up in the ears, than the mouth.

Quaffing is mostly done by rough chaps such as Vikings, Bad Medieval Barons and dwarves - although a more genteel version was practised by Robin Hood during his al fresco picnics.

It is the diameter of the top of the mug or glass which matters. When the diameter is wide, then the liquid spreads widely, and the deeper the liquid, the more widely it will spread.

So if you try to drink quickly from a wide vessel, the liquid will spread more widely than your mouth: liquid will go around the mouth, rather than into the mouth - and (assuming your head is tilted backwards, as necessary for a vigorous quaff) your ears will soon fill-up with fluid. Which is the real reason for the existence of flying saucers. Aliens have a distinct preference for quaffing, over cocktail-sipping.
I know about stuff like this.