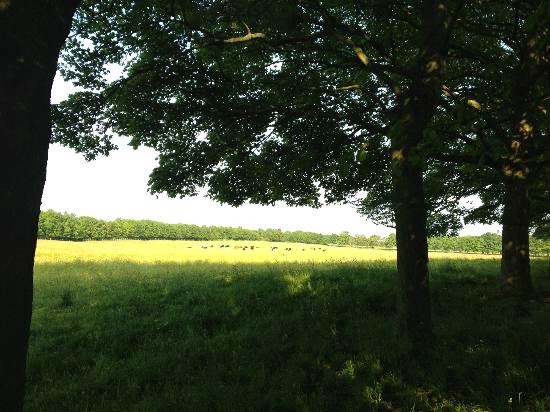 From Centuries of Meditations by Thomas Traherne (1636-74)

This is very strange that God should want. For in Him is the fulness of all Blessedness: He overfloweth eternally. His wants are as glorious as infinite: perfective needs that are in His nature, and ever Blessed, because always satisfied. He is from eternity full of want, or else He would not be full of Treasure. Infinite want is the very ground and cause of infinite treasure. It is incredible, yet very plain. Want is the fountain of all His fulness. Want in God is treasure to us. For had there been no need He would not have created the World, nor made us, nor manifested His wisdom, nor exercised His power, nor beautified Eternity, nor prepared the Joys of Heaven. But he wanted Angels and Men, Images, Companions: And these He had from all Eternity.

Traherne is trying to make sense of the fact that in one sense God is perfectly happy and satisfied, while in another sense God has 'wants' and is therefore dissatisfied. God's wants are the source of our own happiness, since otherwise we would not exist. But in another sense - Traherne's 'Platonism' has it that God already had those things he wanted, 'from all Eternity'.

So earthly life is something which is dynamic, changing, happens in time and has a forward direction (e.g. from wants to their satisfaction) - and to some extent and some-how - God shares in that wanting and dynamism; while in an ultimate and Heavenly sense God wants nothing, since He already has everything.

Whether this is regarded as an explanation - or hand-waving woo-woo - depends on whether you can make intuitive sense of this concept of 'static' eternity - and whether or not you feel that if reality is non-wanting and fully satisfied this necessarily implies that earthly wanting and changing is thereby relegated to the status of something either temporary and trivial (in the context of eternity) or simple falsehood and delusion.

Another example, from my experience:

I was walking across the Town Moor a couple of days ago, and I was perfectly happy; the skies were blue with wisps of high cloud and thronging with skylarks in full song, the atmosphere was of spring, my mind was full of gratitude and contentment - I wanted for nothing, I would not have swapped my situation with anyone else past, present, or future.

Yet that 'moment' (of about 15 minutes) was in transition, from home to the office, at a point in my life. I was actually walking, moving - in a particular direction.

Furthermore, I had engineered the moment by taking a long route to work in order to enjoy the open fields; that moment occurred in a finite and mortal life I was traversing; and that moment was embedded in many other people's lives and ultimately in a divine reality.

My point is that in a personal, psychological way it is perfectly understandable to experience perfect contentment in the context of a strategic, planned, purposive state of 'wanting'.

But this is not easily understandable in terms of metaphysical principles; from that perspective they are seemingly contradictory, the one seems to exclude the other, or one is real and the other a delusion.

My point is that this is an example where it is straightforward to understand God in personal or 'human' terms - in terms of wanting and also being satisfied, but not in abstract or philosophical terms.

And as usual, parenthood makes the whole thing lucid: a Father loves his kids just as they are - he does not want them different; the present moment and status are often felt as unimprovable perfection.

And (not 'yet' or 'but' or 'however'), at the same time, and not as any felt paradox or contradiction; parenthood is also about looking ahead, planning, anticipating, unfolding: a trajectory.

Blissful present contentment which wants nothing, is also in transition.

That just is the way it is. It is the abstract-analytic separation of present from past and future, of happiness from wanting, which causes the trouble.