George Orwell intended and expected to be buried in Jesmond, Newcastle upon Tyne 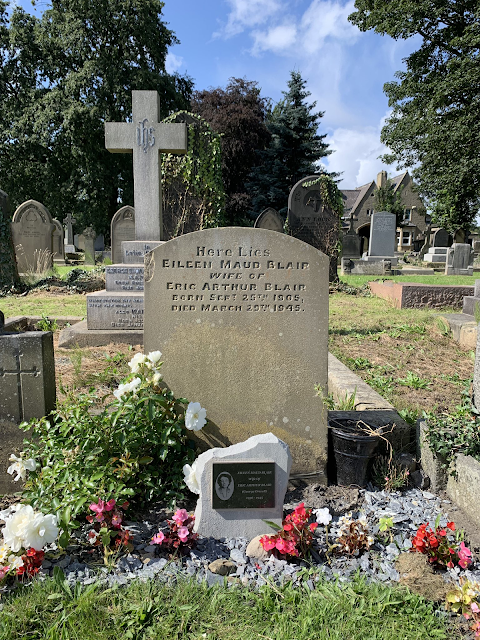 Today I found the grave of George Orwell's first wife Eileen - which is in St Andrew's cemetery in Jesmond, Newcastle upon Tyne (the suburb where I live). It was a plain stone that merely stated her name, dates (1905-45) and that she was the wife of Eric Arthur Blair (George Orwell was a pseudonym).

What was interesting was that the inscription filled only the top half of the stone - the lower part being blank, and it seems clear that the bottom half had been left to receive George Orwell's name. Therefore, at the time he ordered the stone, it seems Orwell did not intend to re-marry - and that he did intend to be interred with Eileen in Jesmond.

However, apparently, he became so lonely after Eileen died that he proposed to several women until one accepted him - and he remarried in late 1949, virtually on his death bed. Orwell died of tuberculosis aged 46 less than four months later; and shortly before the disease became curable with triple antibiotic therapy.

Orwell was then buried in Oxfordshire in a place with which he had no connection - supposedly because none of the London graveyards had any space and also, I imagine, because his new wife did not wanted him buried with her predecessor, as originally planned...

Well, shouldn't the Baron of Jesmond immediately order that Orwell's remains be moved to join Eileen's?