In the steps of Samuel Taylor Coleridge

In the middle 2000s we had three family holidays staying in Greta Hall, Keswick. 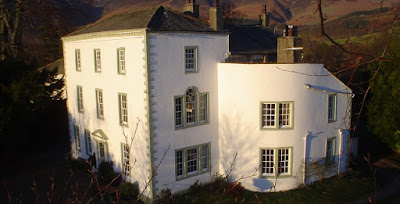 This was the house found and initially inhabited by Samuel Taylor Coleridge (1772-1834), and later and for longer by Robert Southey - the poet laureate and the third, least but (personally) nicest of the Lake Poets who moved up to Cumberland from their early base in Bristol and Somerset. Greta Hall was much visited by Wordsworth and other luminaries of the era - and Coleridge's (unfortunate) wife stayed here (she was Southey's sister in law) when her husaband moved back south.

Coleridge was a tormented and difficult personality, an opium addict; and a world class genius in multiple fields including poetry, philosophy and theology. His influence was remarkable - and international - considering the disorder of his life and indeed his work. Coleridge could be said to have lauched the Romantic Movement - which has never yet gone away, nor has its destiny yet been fulfilled.

The book Lyrical Ballads that he co-published with Wordsworth (who was an even greater poet - regarded as a clear third in reputation to Shakespeare and Milton in English Literature), was probably the most significant single volume of verse in the whole Western literary tradition - nothing has been the same since. He was Britain's two-way link with the academic powerhouse of Germany - and the route by which Romanticism reached the United States via RW Emerson's 'Transcendentalist' movement - amplified by the major intellectual of the next generation, Coleridge's main 'disciple' and Emerson's best friend in Britain: Thomas Carlyle.

It really is quite something to stay in Greta Hall, and to work in Coleridge's study (now containing a a vast antique Chinese bed!) 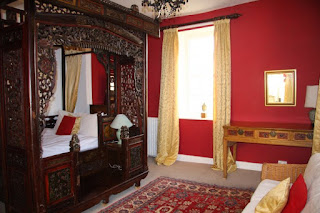 Indeed, we are returning for another visit this summer - when I am likely to be even more receptive to the place since I am immersed in Coleridge at present - partly through reading his works (in the astonishing and marvellous Delphi collection on my Kindle e-book - a whole library of Coleridge for £1.50! - thanks to Delphi I have much of the vast canon of Eng Lit carried in my bag much of the time), but mostly as refracted through the mind of another genius, Owen Barfield - in his astonishingly-profound and intelligent book What Coleridge Thought (1971).
Posted by Bruce Charlton at Saturday, April 30, 2016

"the Romantic Movement - which has never yet gone away, nor has its destiny yet been fulfilled."

Could you explain what you mean by "nor has its destiny yet been fulfilled"?

@Brandon - You could look at this essay

of the book by Owen Barfield called Romanticism comes of Age.

The basic idea was that in the history of Western Man the positivistic age of science and materialism - peaking in the 17th and early 18th centuries - was 'supposed to be' followed, and the alienating split between Man and Nature (later Man and himself) was supposed to be healed, by the human impulse that partially (and distortedly) actually emerged as the Romantic Movement.

In 'What Coleridge Thought' Barfield shows (or at least argues) that this next step was indeed achieved by Coleridge in philosophical terms - but in a scattered, partially implicit and all-but incomprehensible fashion. Barfield was able to recover it, because he has a deep conviction of the same thing, and is linked to Coleridge via the lineage of Steiner, and before him Goethe (who personally lived, but did not theorize, the destiny of Man).

I intend to write more about this.