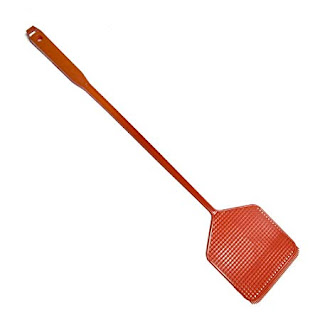 Swatting flies is difficult - they have all-round vision, lightning reflexes, and can fly rapidly and unpredictably. But, a perforated fly swatter will kill them first swat - more often than not.

Apparently flies are helpless against this weapon. Presumably because the perforations prevent a wall of compressed air interposing between the fly and the approaching swatter - as happens with the traditional fly swatting device, the rolled-up newspaper. Presumably, before being hit by the newspaper, the fly is expelled sideways by the compressed air... I don't really know, it happens too fast to see.

Kudos, then, to the perforated fly swatter - for solving a serious problem so simply and cheaply.

PS: Mine - like the illustration above - has a line of spikes along the distal edge, which is handy for extricating and lifting the dead fly, for carrying it to the waste bin.

No one can say you don't cover all the bases on your blog!

I assumed this post fit in the 'genius' series -- a perforated fly swatter illustrates the point that many important creative breakthroughs are small and/or anonymous. The perforations are clearly an intuitive leap but who came up with them is not easy to find out.

@SA - Yes, often because creativity is not appreciated - or regarded as trivial - by the mediocre careerist bureaucrats who call themselves scientists nowadays.

Another example from this blog is that dandruff is curable, and I know the person who discovered the cause and the cure (Prof Sam Shuster) - but this has near zero impact in the 'real' world:

I find the "Bug-A-Salt" (https://www.bugasalt.com) much more fun to use, though arguably you the simple swatter is superior all around.

Wouldn't a container and some cardboard be more useful, in a holistic sense? It would mean that:
* Your window didnt get dirtied by the innards of the fly and then have to be cleaned.
* You wouldnt have to purchase specialised equipment.
* The fly would be free to carry on its existence.
* The fly may ultimately be consumed by spiders, or other creatures and thereby contribute to the food web (which is fundamental for all beings to exist).

@drizz - Those are great tracks! - especially the second one.