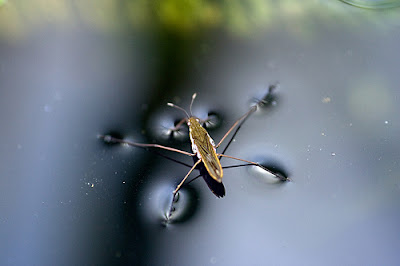 Are we doomed to dwell always on the surface of life?

Looking back, I can now perceive that Original Participation provided an unconscious and spontaneous direct-link with The World, and other people and Beings, until late in my twenty-second year.

Through childhood, adolescence, and up to that point, there was a baseline (albeit dwindling) sense of 'belonging in the world' that sustained me, and enabled me to connect with nature and life; despite that I had developed extreme atheist and materialistic (scientistic, positivist) philosophical assumptions.

But from that point I began to feel alienated, cut-off from things, trapped inside my head, unable to 'lose myself', forget myself, or stop thinking; except when intoxicated in one way or another, or passively-immersed in music or literature - which was presumably a temporary illusion...

My reaction was partly to accept the situation, and adopt an 'hedonic' approach to my life; in hope that continuous pleasurable activities (and maximum freedom from suffering) would suffice. The aim was to live well until, at some point, I died - preferably instantly, without realizing it.

Life was something to be got-through - as pleasantly as possible. Nothing more.

But as the years rolled-by, nostalgia for the lost Original Participation became stronger, and I developed a very powerful (including scholarly) interest in the disenchantment of life, alienation - and yearned for the immersive animism I regarded as normal for our ancestral hunter gatherers - as well as young children.

Yet such a state was seldom, and mostly weakly attainable by even my best efforts.

In the middle of this I became a Christian; however, at first this conversion did not significantly provide an answer to the problem of alienation - because mainstream Christianity barely recognizes, and does not address, the problem. However, it does uniquely provide the potential to do so - if one is prepared to venture beyond the orthodox.

It was not until about 2014 that I began to be aware that there was another way of organizing my efforts in life. The choice was not only between an immersive and unconscious absorption into living versus the typically modern and alienated detachment... There was also what Barfield Termed Final Participation.

It took me a while to grasp what this meant; and to do this I needed to tackle the daunting business of reading Rudolf Steiner's early philosophical works focused on a kind of thinking in which Final Participation was (implicitly) achieved.

I also, by providential synchronicity, rediscovered William Arkle - who approached this same matter from the different angle of levels of consciousness; and the possibility of attaining (for periods) a level of consciousness in which thinking was real and creative.

And finally came the understanding that this mortal life was a time for learning (learning needed for our for resurrected eternal life); so that what mattered was learning-from experiences - rather than trying to attain and stay-in any particular state.

The fact that it was impossible to live always (or even mostly) in a state of Final Participation did not detract from the value of those times when FP was possible, and did happen - so long as we learn from them. It is the learning that can be permanent!

This is where Christianity comes in; because this mortal life is (among other things) a learning phase before eternal resurrected life - and Final Participation is the divine way of thinking and being.

(That is why it is correctly termed 'Final' - because divine living is what is aimed-at.)

So to participate 'finally' - in thinking - was both a foretaste and a preparation for Heaven; therefore an extremely important life-experience to learn-from.

That is - broadly - how matters stand. Romantic Christianity has emerged as a term to describe that Christianity in which participation is regarded as crucial, and taken with primary seriousness.

In other words, Christians need to acknowledge and overcome alienation; and work to experience the world, other people and Beings directly; in thought. And know that that thinking is reality.

What I have observed in myself in recent years, is that the surface of thinking - with thoughts rapidly changing and lasting from fractions of seconds to a few seconds - is not much different from what it always was. There is a constant and superficial play of images and ideas - which are heavily influenced by immediate concerns, the environment, and System manipulations.

The Real Self experiences this level of consciousness as if a pond skater moving across the surface of water that is constantly changing its colours and patterns - but which can never be penetrated; can only be known indirectly and by observation and reasoning...

But as well as this there is a participative thinking, which moves more slowly (minutes, hours, days...). This is like the flow of a stream, and the thinking of Final Participation is not on the surface of, but instead a part of this flowing stream yet capable creating and of adding to the flow - something from itself.

Final Participation is unimpeded by the surface of the stream; because it operates at the level of consciousness that includes air, surface and water - yet we, as incarnate Beings, remain many and distinct - loving and creative - selves.

So, although surface alienation remains, moment by moment; there is an underlying direct participation which lies on the edge of my consciousness, and of which I can become aware at (almost) any time; but which, even when not actively attended-to - constitutes a healing of the rift between my-self and the world which opened up some months before my twenty-second birthday.

Dr. Charlton:
I shall have to reread this a number of times, but it's amazing.
This underlying stream you speak of that makes up Final Participation - do you think it has anything in common with the Being of Oneness that lot of Eastern religions and mysticisms speak of? Perhaps they just get the part of it all being One, instead of individual beings that are eternal, wrong?
Just a thouught.
thanks you for our continuing stream of thoughts.

@Todd - No. Oneness teaching is much closer to the (impossible, and harmful) desire for regressing to Original Participation - as if an adolescent could/ should literally become a young child again.

You're lucky. Many people are practically there by age twelve, even though the impression that better educational, social, and vocational success will relieve it* can persist well into adulthood.


*Or make it manageable in life and profitable for one in the arts and media.

@a_p - I think that I did retain some OP for considerably longer than most people - and consequently felt its passing more painfully.