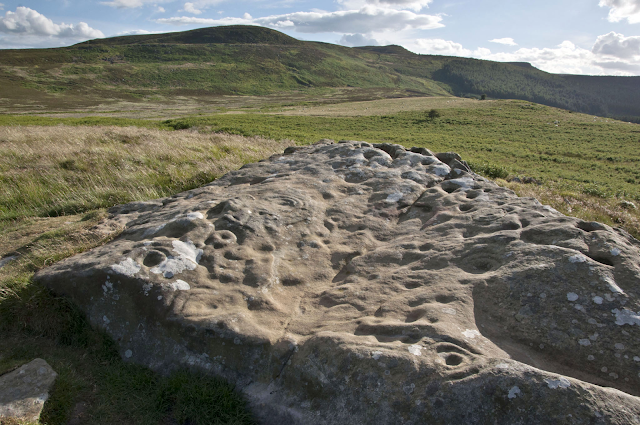 Northumberland has many examples of 'Rock Art' - which seem to originate 4000-plus years ago. My wife and I found an example, which I have not been able to discovered recorded anywhere (although it probably is) - they are common enough to stumble upon.

Their actual 'function' remains controversial/ mysterious - pretty much the only sure thing is that they are not 'art'.

But so many centuries of erosion - water and wind acting-upon on a surface that is relatively soft and exposed sandstone - means that little detail is visible on most examples.

The above rock at Lordenshaws (near Rothbury) is one of the most intricate and detailed survivors; and it was about twenty years ago when I was standing alone in front of this particular rock (with nobody else in sight) that I felt I understood the essence of what it was designed to communicate.

I think that this type of stone was a map of the relevant surrounding area - a sacred map of the concentric circles of earthworks, raised mounds and barrows represented by their inverse of hollows, and the ritual paths - and perhaps waters - streams, lakes etc. - shown as lines and channels.

I can easily picture a priest standing before the rock, holding a long wand, and pointing to the relevant elements as he chants a song been handed down orally, diligently learned during his initiatory apprenticeship; a song that describes the stages of a particular ritual in which movements through places correspond with movements of the mind; and where movements of the mind correspond to relationships with the spiritual realm...

That's what I think 'rock art' is about - each such rock serving as a kind of spell-book or grimoire; for teaching - but mainly to re-enact mentally rituals that have-been, and will-be, enacted in the body and environment.