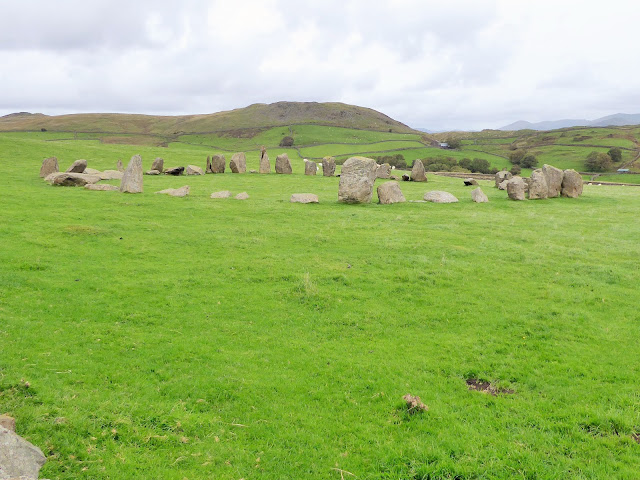 The Swinside stone circle, near Ambleside in the Lake District

Stone circles were of primarily religious significance, clearly; and there is a strong tradition of assuming that they were usually 'sky temples' - which seems likely given their locations and the 'feel' of them.

I accept that there is an element of astronomical alignment with some of these circles, such as the ability to indicate sunrise at summer solstice (as at Stonehenge) - but I believe that any such measurements could only be approximate - given the very various shapes and sizes of the stones.

Such stones are not at all well-suited to the purposes of precise measurement - if that has been the purpose surely something with a distinct point, more like an obelisk would have been employed. Also, (nearly always) the lack of a central stone in circles seems to make the use of circles as highly-accurate calculators less likely.

When I visited Swinside (above) I was struck by the variety of shapes and sizes, to the point that I felt that each stone had an individual character; and it struck me that this may imply that each stone represented a particular person.

I could imagine the circle makers of neolithic times, being alert to such correspondences; and finding a particular, distinctly shaped and sized, stone; that they intuited had a one-to-one relationship with some (probably deceased) individual; presumably someone regarded as important or worthy - who deserved, or needed, such a monument.

Or, indeed, each stone might represent an anthropomorphically-conceived god from the (presumed) pagan pantheon. Or stone corresponding gods may be have been ex-humans - whether deified or avatars.

The point is simply that each stone's shape was related to its identity as a personage - as well as the placement of the stone having a function related to alignments.

Therefore I envisage these circles being added-to, incrementally, over generations - as suitable stones were found, and perhaps modified. When circles were being used for religious rituals, the participants would also (simultaneously) have regarded themselves as surrounded by spirits of specific, venerated ancestors... Again able to contact them - whether, from love, for guidance, or for propitiation.

Yes, at least for people in 2022, a detailed focus on geometrical alignments (even to the point of calling Stonehenge 'a computer') comes across as bureaucratic thinking, and diminishes the mysterious appeal of these ancient temples.

This is the direction much New Age thinking takes - for example 'dowsing' these structures is practiced and discussed in a drab and matter of fact way, as-if just another method of surveying.

I think it was different for the pioneers of astronomical alignment interpretations - for them, these alignments were evidence of ancient people having extraordinary (and mysterious) abilities - previously unsuspected. It is the difference between personal creative discovery on the one hand, and 'stuff to be learned' on the other.