Why The Master hates Dr Who 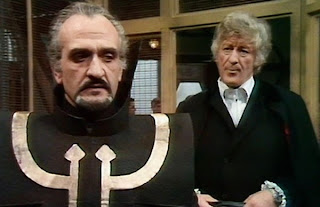 The Master reacting to Dr Who's sarcastic quip


It all dates back to The Master's attempt to get a job at a prestigious college in the USA.

Despite a dazzling curriculum vitae of graduating with first class honours, and vast numbers of publications (hand written papayri, parchments, printed books and electronic micro-podules), and teaching experience stretching across several millenia; his application was rejected without being sent to referees on the basis that The Master did not have a PhD.

The Master had, in fact, dropped out of the University of Gallifrey after completing his MA; and gone off on a Galactic Grand Tour while laughing at his old friend Who who had to grind away at mundane research for a further three years towards his doctorate.

Instead of showing sympathy at this humiliating injustice of rejection on an academic technicality, The Doctor (as he now styled himself) snidely remarked that this was exactly why Who had finished his studies instead of chasing-off after stars, seas and sensuality, leaving the job half-done.

The Master was, naturally, offended and angered by Who's arrogance; and spent the rest of his life chasing The Doctor around space and time, hoping to torture him to death as pay-back for that wounding remark.

Due to how long the franchise has existed for, Dr. Who (taken as a half-century-spanning whole) strikes me as a singularly depressing document of the decay of the mass-media....

For those unfamiliar with the Master - Doctor dynamic, this collection of clips has been compiled:

There's nothing so vicious as academic politics.

@AG - Indeed. And in principle I think the Master was correct - although undoubtedly he over-reacted, also William James agreed with him:

An academic qualification may open or close a door, but it does not take away from the discoveries and reporting of a man of genius.

Mozart, Beethoven, and Shakespeare are singular, (and none had a PhD); but how many doctors are there who have earned their degrees studying these unlettered men?

Genius may benefit from mentoring, but will break any shackle that attempts to thwart its path. In fact, the struggle to break the shackle often unleashes genius in its most energetic forms.