We live in a world of professional performers - singers, musicians, actors, dancers; and it seems natural to us that these be mostly professionals, dominated by professionals who do these things for a living.

But - with a very important exception - I am against this, on the whole. The arts professions are full of dull, mediocre professionals, mostly supported by subsidies coercively extracted from the public at large - a public who seldom bother to attend even when performances are subsidized or free of charge.

Take dancing. When it became 'Dance' it became dominated by professionals; and we have gone from a world that was full of people dancing, to a world where people watch dancing - and the few who themselves do much dancing are wannabe professionals and their teachers.

Singing? Most of the best singers - in the sense of 'singers you would want to listen to' are amateurs. Professional singers offer many technical advantages such as quick-learning and breath control and reliability... but most of them just aren't very pleasant to listen-to and lack musicality. Beauty of voice and the ability to phrase are gifts: they cannot be manufactured.

Acting is a similar thing. Most professional actors are rubbish at acting - they succeed either because they are good looking or have a nice voice and because there are far more jobs for professions than talented professionals. (The same applies to directors.) Yet if you go to a school play, or amateur dramatics, you will usually find one or two absolutely stunning natural actors - who do things far beyond the professional.

Classical musical instruments generally require years of practice, yet most cities have amateur orchestras able to play nearly all of the repertoire to a good standard - and in concerts more enjoyable than those produced by the general run of cynical, jaded and under-rehearsed professional musicians. And in a wider musical perspective, folk music around the world is full of stunningly gifted part timers - virtuosi even.

What about the exception? The arts always have a place for the outstanding genius; and these are the people - they are the only people - who should be full-time professional performers.

Singers like Joan Sutherland or Pavarotti really were the best in the world - and by a margin, and pretty much everybody can hear the difference. People of that class (and the class just below that level) should be the professional performers, and they should be the only professionals.

Something similar applies to other performing artists - the few dancers, actors, instrumentalists who are really great are the ones who can make a living at it, and who the community is happy to support with fees - and the rest should be amateur.

The model even potentially applies to literature and painting.

John Martin (1789-1854), was an artist who specialized in epic Old Testament paintings - and he made a living by touring his vast canvases, and charging people to come and look at them. 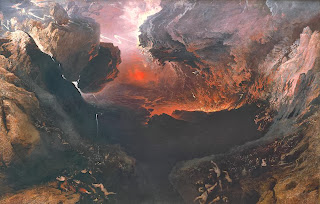 The  professional performing arts should be rare and stunning experiences; done by a tiny minority of great performers.

It is, in practice, almost impossible to prevent such people becoming professionals, and indeed becoming wealthy; because lots of people will willingly travel long distances, and pay large sums of their own money, to see 'the greats' perform.

But people will voluntarily do this only to experience greatness in performance; and not the mass of performers who merely competent, certified, salaried and 'professional'...

Have you ever heard of Chris from Dark Brightness blog? He's a New Zealot (what I call people from New Zealand). Also a physician btw and one of the few conservative Christians there.

He makes a similar point, but WRT the sports rather than the arts.

I guess the shift from the masses doing art/sport to watching the same is a part of the mass media's tentacled grip on society.

@I - Yes, the argument works for sports too. I find it hard to understand why most people want to watch most professional sports - considering the dourness, bad temper, cheating, gamesmanship and consistent mediocrity of so much of it.

I cant tell you how many times I wished this was the case. Especially for music, which is close to my heart when it comes to the arts. Sometimes it seems like whatever training these `virtuous` professional musicians go through completely deadens their musicality. As a side effect, the ability to appreciate music as language, as expression, and to add beauty, elegance and above all gravitas to it (with proper phrasing etc.) has faded away from the public consciousness. Perhaps it was never there, not for the vast majority, but I find that difficult to believe when I listen to the best of the Baroque, Classical and Romantic eras.

There is actually some recent modern music which had that spark, but it is reactionary, offensive, nihilistic (albeit heroic and virile) and is impenetrable even for the seasoned listener because of its nature; especially for Christians.

@L - I remember how crashingly disappointing it was to meet professional classical musicians from major orchestras. Their attitude to music, to life! was appallingly deadened, cynical, lazy and grasping. They had not in the slightest degree been ennobled by their contact with great art.

But a great musician is another matter - I met Dennis Matthews

who was the best British pianist of his generation in the classical era repertoire - and *he* lived and breathed MUSIC.

I don't think professional performers are necessarily the problem, accept as they do not persuade the rest of us to discover, explore and develop our appreciation for art in general, and the art form which they are presenting.

Awaken in a person first a strong emotional connection - Do that first. Once that is there they will, almost completely of their own accord, develop a passion for the art which will lead them into a desire to appreciate and create art. And that is what the aim of a great artist is, to propagate meaning through art to inspire others to do the same.

No better example comes to mind than what Benjamin Zandler exhibits in his TED lecture http://www.ted.com/talks/benjamin_zander_on_music_and_passion.html