The most famous person I ever met... 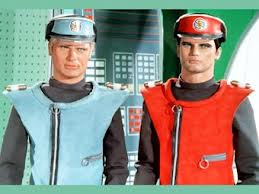 (Note: Captain Blue is on the Left.)

I met him in the BBC Pebble Mill studios in Birmingham, 1990 - where he played a leading role in my one and only radio drama production.

I candidly admit it is a bit lame to have met Captain Blue, and not Captain Scarlet - but I maintain Blue's role was consistently under-rated, and that Scarlet (and of course the Angels) took away a lot of credit that was due to him.

BTW - without his uniform and under studio lights, Blue looked rather different: 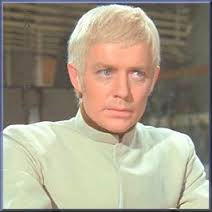 I can only say that - while not exactly jovial or friendly - Blue was highly professional; and I was very grateful he took time away from saving the earth to play the part of Henry David Thoreau.

The most famous person I ever met was Nick Griffin. Maybe famous isn't quite the right word. Still, I was very excited about it.
Oh, and there was The Queen, too.
I almost forgot that.

He sold me the title Baron of Jesmond for 15 pounds and an elaborate certificate to prove it.

That suits. Baron Charlton sounds so much better than Doctor...