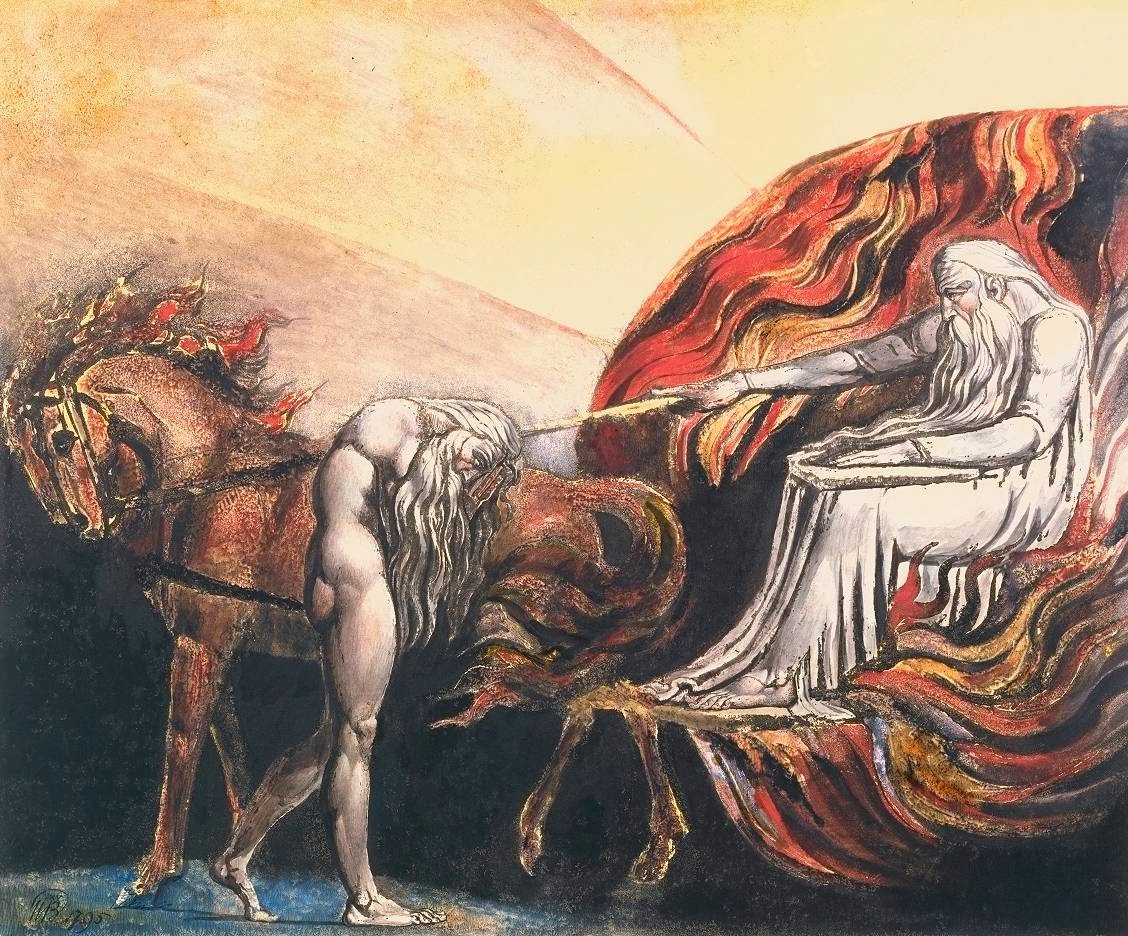 For Christianity (but not for other religions, or not necessarily) it seems that there may be a need for the Father, Son and Holy Ghost to be understood, depicted, discussed mostly in a concrete, personalized and simple fashion.

There are have been, at times, personalized depictions of God the Father - as an old man with a beard, most often (I think) but my impression is that since the mid-19th century this have dwindled and disappeared.

At the same time, the understanding and belief in God the Father has dwindled.

The Holy Ghost was seldom (I think) depicted as a man (but maybe as a dove) - however, His name has been changed from Ghost to Spirit - which is again a reduction in concreteness.

It is easy enough to believe in the reality of a ghost - but a spirit is imprecise and too vague to inspire love and worship.

The exception is Jesus Christ - who has continued to be depicted as a man - concretely (indeed, often enough depicted as only a man) - consequently (it seems to me) the strongest spirituality in the modern world relates very specifically to Jesus Christ and is hardly able even to discuss the Father or the Holy Ghost - and such discussions have a hollow and unconvincing ring to them - don't you think?

It seems only Jesus is really real to the modern Christian.

This is the secret of the relative success of evangelical denominations - the concrete reality of Jesus and therefore of a Jesus-focused Christianity; but focused almost exclusively and therefore - in practice - incomplete.

And for Catholics there is the Blessed Virgin Mary.

Much of her special power (in the Catholic denominations) comes (I believe) from the fact that she can be readily and un-forcedly understood and pictured and depicted as a sanctified human.

My point is that humans are as they are - which is focused on other humans at a very deep psychological level; on personal relationships; and this means that abstractions are not really-real to us (or, only to a very few) - and when the abstractions refer to God, and concrete representations are regarded as either wicked or dumb, then God becomes unreal - necessarily so.

Humans simply cannot, as a general rule, regard abstractions as real; cannot believe in abstractions - and, when we try to, we become confused and weakened by abstractions.

I really hate to tell you that, though the post was insightful, your extra note was brilliant.

What happens is that I typically write my blog post for the day between about 05.15 and 06.45, then break-off to do family stuff, while often brooding on what I have written

- then some time later in the morning (anything from one to four hours later) I see some way of putting it all 'in a nutshell' - and then that gets to be the added note.

I suppose a Really Rigorous Intellectual (someone like Pascal, Nietzsche or Wittgenstein) would then delete the sprawling upper blog post, and leave the aphoristic note...

But, luckily, I am not an RRI!

We also have the saints.

The problem with your note is that nobody says God is "abstract". People simply use abstract notions to understand and describe a "concrete" God.

This need for a concrete referent for spiritual feelings makes the Catholic Church's gallery of saints one of its most attractive features. Who could not find a saint with whom he could identify and be inspired?
The saints' stories are much more human than that of Jesus, appropriately, but that makes them all the more approachable.

@josh "The problem with your note is that nobody says God is "abstract". People simply use abstract notions to understand and describe a "concrete" God."

The same applies to other religions - in practice, if there is not a personal God, then some-body else gets worshipped/ venerated by default - or else faith dwindles.

In reality, the further you are from something the harder it is for you to understand. Even a fully embodied and mortally-experienced Christ is difficult to understand because he was perfect and he wasn't.

So, in practice, we supplement our understanding of the divine by also understanding people who are closer to us than He is, but also closer to Him than we are. Saints, heroes, parents, people of good character, great men, etc.

Modernism's deconstruction of traditional heroes and great men, and its attempt to put parents and children at loggerheads, is in part meant to make it harder to access Christ.

Bruce Charlton,
that process makes a lot of sense, but honestly it would be easier to understand the thought of Pascal, Nietzsche, and Wittgenstein, if they were willing to show their work like you do.

Very interesting! Speaking from an Orthodox perspective, I find much of theological significance in this post. You might be interested to know that currently in Orthodoxy there is debate over the representation of the Trinity in certain icons. That is, can the Father be represented as an old man, the "Ancient of Days", or is this theologically incorrect?

Orthodox doctrine holds that only God the Son can be visualized as He is, since only the Son became Incarnate; indeed, as St John of Damascus argued, the entire legitimacy of the veneration of icons rest on the Incarnation.

However, the other two persons of the Trinity may be visualized symbolically. One old tradition is to depict the Trinity as the three angels who visited Abraham, and indeed this visitation has been traditionally understood as an actual visit by the Trinity (see the famous icon by Andrei Rublev).

Another tradition is to represent the Spirit as a dove, and the Father as an old man; the former is based on the appearance of the dove at Christ's Baptism, and the latter on the vision of the Prophet Daniel, who saw the Son of Man (Christ) sitting at the right hand of the Ancient of Days (the Father).

Some object to the latter depiction on the grounds that this tradition was imported from the West and was not an authentic part of Orthodox iconographic tradition, and that it is theologically incorrect because many Fathers interpret the Ancient of Days to be the Son, not the Father. Also, Christ Himself said that we can only know the Father through the Son, i.e. we cannot see the Father in Himself, but only the Son.

At this point I think I would tend to agree with you that the discussion becomes too abstract for most people, and we can see this by the simple fact that many Orthodox have come to love and venerate the Trinity icons with the Father as an old man, and are not concerned with the fairly abstract arguments against such veneration.

should be 'and we aren't'

To make a form to represent or display God is idolatry.

God, therefore, must not be comprehended, reduced or bound by the human desire for a concrete form. And at that point there is no need for the label "God", and hence there is no basis for disagreement with respect to what cannot be named. This is, I suspect, why in Judaism, the name should not be attempted to be spoken. We have then reached the point of intersection because without a theistic image there is no theism.

@Adam - I puzzled over that. I assumed it was too deep for me to comprehend.

BTW - On Blogger you can delete your own comment/s, and then repost a corrected version (but this would then come up as the most recent comment).

@Jabberwocky - to answer your (censored - blog policy!) comment: my understanding is that the non-elite, mass movement, folk religion version does have multiple concrete representations - a veneration of local 'saints' and holy men. And this has always been the elite. Only the intellectual elite maintain abstraction. I get this from the work of Ernest Gellner.

@NF - But you don't believe that God is real - or not real/relevant enough to make any significant difference to actual life, to justify significant suffering and self-sacrifice - so your comment is, surely, evidence that I am correct!

One of the best ways to convey certain kinds of truths (& have them remembered) is to tell stories involving anthropomorphized agents.

@ajb - Indeed. And I recall Bernard Shaw's mockery of anthropomorphic God which infected my mind as a teenager.