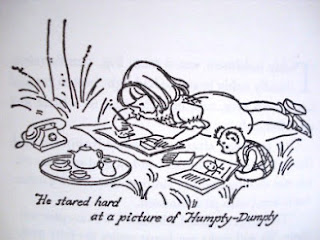 Teddy Robinson was the hero of several books of children's stories written and illustrated by Joan G Robinson (1910-1988); he was the Teddy Bear belonging to her daughter Deborah who is the heroine of the stories. They were popular enough when I was a child that several volumes were in our tiny local library, and they are still in print including the collection 'Teddy Robinson Stories' which I bought to read my daughter. For many years she kept it by her bed to read in case she woke up after a nightmare - because the world of these books is a wholly delightful one.

These stories are perfect of their kind; very cleanly written and neatly structured, with amusing pictures that depict Teddy's character, an atmosphere that is cosy and warm-hearted, stories full of incident and (moderate!) excitement, and the whole pervaded by characteristically English humour (for the children) and wit (for the adult storyteller).

The set-up is that we mostly hear Teddy Robinson's internal monologue (including poems) and conversations with other toys, wild animals and the like; but Teddy Robinson is a real Teddy Bear and can't speak to humans - and we (as adults) notice that nothing happens to him which could not happen in real life; including that he seems to need to be moved, rather than able to move himself, while also remaining unaware of this limitation.

Teddy Robinson has a very appealing character, being basically kind, droll and forgiving; but prone to irritability and misunderstandings with other toys and animals. One particularly funny story describes how he sees another Teddy in the window of a house across the road, whom he initially likes-the-look-of and is keen to meet; but somehow they get embroiled in an 'arms race' of dressing-up and adornment; until he starts to find the other Teddy conceited and nasty. Eventually the two Teddys (and the girls who look after them) meet and are mutually hostile until the misunderstanding is revealed.

In sum; perfect bedtime stories to read to the very young child, or be read to the somewhat older child - and the kind of book which stimulates childrens' imaginations, does them good, and encourages creative play.