Where did all The Outsiders go? 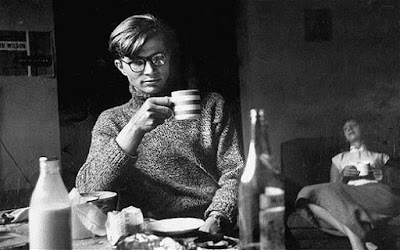 Sixty years ago - Colin Wilson published The Outsider (1956) then Religion and the Rebel (1957) - and at that time everybody recognised what he was talking about: these existentially-overwhelmed outcasts who saw the mainstream world as meaningless and pointless, who felt alienated, and who lacked a place in society.

Wilson gave a name to something everybody knew, something that (under various terms) had been a feature of The West since the dawn of Romanticism (in the late 1700s); and he provided numerous examples of more-or-less famous and accomplished Outsiders - analysis of what had been tried as solutions, and suggestions of what might be done in future...

But here-and-now, Outsiders are not merely socially invisible; but also people don't feel like Outsiders anymore: these are no longer the difficulties people express - the Romantic Outsider has disappeared.

Has the species gone extinct, has the Outsider somehow been 'cured' - is he now integrated into society? Of course not! Everything which caused the Outsider's alienation is now 100... no 10,000 times worse than it was in 1956...

He is still present, he has neither been cured nor integrated; but nowadays he no longer realises he is an Outsider, he no longer feels existential pain, he is outcast but indifferent; because the Outsider is now so rapidly, pervasively and persistently doped and distracted by the pervasive mass media as to be a person who never thinks consecutively for long enough to recognise his situation - never mind to raise objection or do anything effective.

The slightest glimmering degree of becoming existentially alienated, bored or aware; is now almost-instantly extinguished in one or another virtual-reality before it can have any effect.

The Outsider now has zero time to think or feel 'outside' of anything - or inside for that matter.

A few are still around. While distractions abound I see that as symptom, not cause - there is a much larger issue with a long history.

It is the failure to solve the control and suppression of psychic development in this world that still exists after the fall of Atlantis and until this day.

Zeus then, but Yahweh today seems to feel the same - no psi, no Faculty X development allowed. Material accomplishment is even limited (moon landings stopped).

It's a world under control and dominion of that which does not want real human development. Colin Wilson explored this in the Mind Parasites and posited entities that suppress consciousness. While seemingly fiction that perspective looks just like reality. It, or they, are there and not giving in even a bit.

I think that's right. One of the great things in Religion and the Rebel is the way CW relates the Outsider phenomenon to the wider civilisation. This line of thought isn't found in his later books and that's a real loss. The appearance of the Outsider, CW says, is symptomatic of a civilisation's decline. But the Outsider is also a sign of hope in that it is the Outsider's civilisational role to reverse the process of decay, reignite purpose and spark off a broader, deeper level of consciousness. It's obviously in interests of the 'Prince of this World' that none of this happens and the Outsider is denied the mental space needed needs to develop and become the prophetic figure he or she already is in embryo.

@John - Yes. At the time of F&tR, Wilson saw that the solution must be religious - and indeed in some sense 'a new religion'.

I think we would agree that this was correct, in that we must have a real religion, but that the religion cannot simply be the restoration of a past set of historical church practices.

This project of a new kind of Christianity was later hijacked, subverted, inverted by the sexual revolution - which led us to where we are today: churches as Leftist politics pretending to be Christianity.

Wilson later changed his mind and tried to find an answer without reference to any deity. This failed - and indeed the same failure was also recapitulated by the mid-1960s revival which took up some of Wilson's themes.

But your point is important that Outsiders are the ones whose task is to solve the problem.

However, most modern potential-Outsiders (and indeed those few and obscure real Outsiders whom F-X mentions) have lasped into hedonic materialism and global-elite-approved virtual realities - or else address the problem on a superficial level (such as politics) at which they are doomed to fail; and which will indeed make matters worse by encourageing the root of the problem itself.