Adge Cutler, 'Scrumpy and Western', and my part in the matter 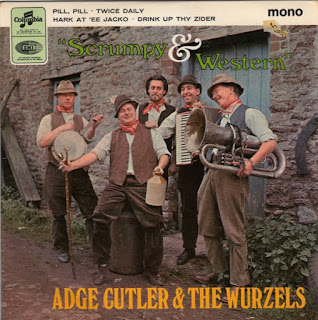 I spent my schooldays in Somerset, in a village called Backwell; and just next door in Nailsea was the birthplace of Adge Cutler: the man who wrote our 'national anthem' - Drink up thee zyder' and thereby invented the musical genre of 'Scrumpy and Western'.

Here is a 30 minute documentary on Cutler - which explains how he wanted to write pub songs for his homeland, which up to that point had lacked any:


of which I eventually, briefly, became a part-time practitioner (see below...).


Yes, that really was how the rural people spoke in Somerset when I was a kid - no exaggeration. As well as the distinctive pronunciation, there was also (compared with BBC English) an unusual use of pronouns - as in the I used to perform 'Don't tell I tell ee' (i.e. don't tell me, tell him). This version is performed by another Scrumpy and Western exponent, the song's co-writer, Trevor Crozier:


This post was triggered by my discovery that Nailsea had recently erected a bronze statue of Agde Cutler (which must count as a kind of incarnate oxymoron): 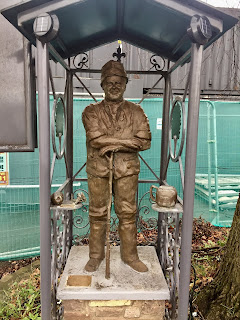 Some essential background on terminology. Scrumpy is the locally-produced rough cider (pronounced zyder) - which is the alcoholic drink made from mouldy apples that gets called hard cider, or applejack in the US. This was twice as strong as beer (and much more palatable), and cheaply available in bulk from farms - as well as in pubs - it was the normal social drink in the West Country until about 40 years ago. Oh, and wurzels (strictly mangelwurzels) are big turnips, grown for feeding to farm animals.

Scrumpy and Western was a punning name for the kind of music illustrated above - which was a kind of yokel comedy that was an affectionate parody of West Country rustic life (the West Country of England is essentially Somerset, Devon and Dorset - Cornwall being a different thing). The subject matter was of the classic English Seaside Postcard/ Benny Hill/ Two Ronnies kind: smutty innuendo, and the celebration of drinking, eating, working men outwitting posh people etc.

This music was designed for local consumption - with specific and detailed references to local place names; which made it all the more appealing. The Cutler-penned Twice Daily was the B-side of 'Drink up thee zyder', and a kind of secret cult favourite among teenagers, for obvious reasons... The lyrics are clever, the tune is nice, and altogether it's a really great song!


Another favourite band of this type, but more of a folk group, was The Yetties from Dorset:

I took-up the piano accordion aged 16 - because I wanted to play a squeezebox of some kind, and they happened to have this one at school, that I could borrow. I took to it quickly, and formed a 'group' with my friend Gareth - who was a singer, multi-instrumentalist, and charismatic 'front man'.

We dressed up in suitable yokel gear based on the Wurzels - flower pot hat, neck scarf, string around the trousers and hobnailed books - and Gareth wielded a Cutler-esque thumb-stick; which, when thrust-upwards, apparently makes the (rude) V gesture, made popular by Winston Churchill.

And we called ourselves The Muckspreaders, after the above Yetties song which was our finale. The Muckspreaders only did a few gigs of which I recall one at a Bristol University dental students event and another as part of our school annual revue. Surprisingly we always got a great reception - thanks to good material, Gareth's extrovert comedy, audience participation in the singing, and local patriotism; my job was was merely as accompanist, straight man and choral reinforcement.

Anyway - this was all due - ultimately - to Adge Cutler; hence this nostalgic tribute.

I was curious to hear what a rural Somerset accent sounded like. In "The Ribos Operation", an episode of Doctor Who, Ian Cuthbertson plays a con artist who in one scene pretends to be a town crier. The Doctor says to his companion that the crier gave himself away as an Earth man because he spoke in a Somerset accent.

It must have been an urban Somerset accent because it certainly lacked that almost-American twang heard in these videos. And thank you for sharing them, they were fun, especially Cutler's. (Full disclosure: I haven't watched the documentary all the way through yet.)

@a probst - Iain Cuthbertson was, of course, Scottish; and although he was a great actor, it's unlikely he would have been able to do a specifcially Somerset accent (most likely the generically West Country-flavoured accent that actors call 'Mummerset' - 'mummer' being an old term for actor).

Incidentally I met Iain Cutherbertson during the recording of my (one and only) radio drama (https://solitude-exile-ecstasy.blogspot.com/) - he'd long been a favourite actor of mine, and I found him impressive in stature (a 'presence'), and a likeable personality. I also met Ed Bishop (Captain Blue from Gerry Anderson's Captain Scarlet, and Ed Straker from UFO).

I like that "almost American twang", I think it would not have been hard for them to play with a bluegrass band

@Nat - My understanding is that some aspects of the 'American Accent' came from the South of England - albeit mostly the South East (East Anglia) - however the Appalachians was (I think) mostly settled by people from the border of Scotland and England, who have a different kind of accent, at least nowadays; and some Scandinavian influence from the time when they were part of the Danelaw. I say 'they' but these are most of my own ancestors - The Charltons being a leading English Border Reiver family.