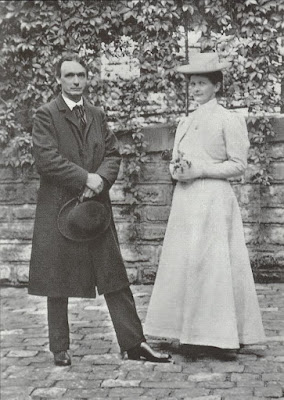 Rudolf Steiner (1861-1925) founded a movement called Anthroposophy, and has been (pretty much) ignored or ridiculed outside that movement.

So the attitudes to Steiner have tended to fall into extremes of uncritical acceptance and approval of everything he said - or wholesale rejection. My own attitude is that Steiner was a genius of world-historical importance and vital to Western concerns here-and-now; but that most of his best work came in the late 1800s and before he was an Anthroposophist; and, quantitatively, the great bulk of what he wrote after 1900 is wrong.

Because of my interest in Steiner, and the qualified nature of my admiration, I have been interested in his biography; but I have found it difficult to grasp due to the uncritical/ hagiographical nature of his admirers.

Also, until recently, not much has been known about Steiner's life except what he wrote in his autobiography (or in admiring memoirs by insider anthroposophists); and this document - while very interesting and well worth reading - is clearly framed by the requirement to justify and synthesise everything Steiner ever did; to present his life as a consistently-developing whole.

Indeed, Steiner spent a great deal of time and energy in his late lectures and books (and revised editions of books) works insisting that he had never really changed in any fundamental way, that the entirely of his work and life were part of a single coherent project; and that any contradiction or qualitative changes are an illusion.


Anyway, I am currently, carefully reading the first biography of Steiner that is sufficiently detailed to provide sufficient data to get past the hagiography and allow the reader a chance to reach his own conclusions about Steiner's life. This is excellent the multi-volume Peter Selg biography - Rudolf Steiner: Life and Work.

In fact; Selg is a professional Anthroposophist, and in his interpretations he generally endorses Steiner's own version of his motivations - but the detailed information he provides does allow for alternative views to be developed.

To cut to the chase; from Selg I have found confirmation of what was previously just a hunch:

1. Until at least 1897 Steiner was Not a Christian; but was essentially anti-Christian - a Nietzschian individualist, atheist. And largely disdainful of spiritual matters.

2. The period from 1898-1900 is essentially unrecorded, unfortunately; because during this time (according to Steiner's Autobiography written in the mid 1920s) Steiner had become a Christian due to a direct mystical experience; but was not yet a Theosophist.

3. In 1900 Steiner met Marie von Sivers at a series of lectures he delivered to the Theosophical Society. She bowled him over (younger, attractive, talented, charismatic, aristocratic); and became first Steiner's close collaborator/ secretary; then later his second wife. MvS was - from the start - keen for Steiner to be a movement-leader, and had a socio-political (rather than primarily spiritual/ Philosophical) focus of interest.

4. And from 1900 and the embrace of MvS as lifelong companion; Steiner became first a Theosophist and later set up his own splinter Theosophical group called Anthoposophy - which rapidly grew-away-from the parent organisation. But for Steiner, the early years of the 20th century were occupied in re-presenting the major pre-existing elements of Theosophy in a way compatible with Steiner's personal philosophy. These then became permanent and core elements of Anthroposophy.

5. Steiner was a very political young man, for sure - whereas there is near zero objective contemporary evidence for him having been 'spiritual' until about 1900. Up to the early 1900s he was involved in radical anarchistic left-wing society and politics; via articles in magazines (including editing magazines), a book strongly advocating the person and ideas of Nietzsche, and heavy professional involvement in lecturing at socialist working men's colleges.

6. Steiner worked closely with Marxists, but was himself an individualist - and hated the collective aspects of socialism/ communism.

8. From the 1914-18 war period and for several years, Steiner's political activities focused on promoting his Threefold Society ideas - this briefly gained high level national influence, and led to a powerful and dangerous backlash against Steiner and his movement (e.g. an assassination attempt, the destruction by arson of his new headquarters building).

9. Immediately after Steiner's death, the leadership of Anthroposophy was taken-on by Marie von Sivers; and she presided over many years of bitter schism, infighting and legal battles among Anthroposophists. In many ways, the movement has never recovered.

10. Nowadays, Anthroposophy has all-but disappeared into the socio-political side of Steiner's work (especially Steiner 'Waldorf' Schools) - but now with a collectivist mindset, in-line with modern Leftism (and with the preferences of Marie von Sivers). So far as I can establish, all modern Anthroposophists are assimilated to collectivist New Leftism (except for one correspondent of mine!)


In sum; it looks as if the inflexion point in Steiner's life and the many new initiatives of his post-1900 career was primarily due to Marie von Sivers. From my perspective she was 'to blame' for most of what I find unacceptable about Steiner!

My regret is that nothing is known from contemporary sources of Steiner's self-reported (but not externally-validated) brief period as a Christian-but-Not-a-Theosophist - from 1898 to the summer of 1900.

So - for those - like me - who regard Steiner's philosophical and spiritual insights as vital, but want to set-aside his Theosophical and socio-political aspects; there is a large task of sifting and discriminating, extracting and reconstructing, to be done!

An enjoyable task - and extremely worthwhile!