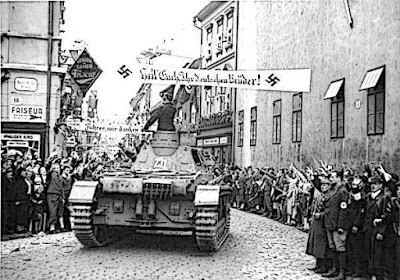 I got the term Spiritual Warfare (or 'Unseen' warfare) from Russian Orthodoxy, where it refers to the combat between a devout Christian - perhaps a hermit, monk or even a Saint - and the powers of darkness that will attempt to subvert and corrupt him to the side of evil - for example by demons pretending to be angels, or by flattering him into spiritual pride (prelest).

Indeed, the world (i.e. of Holy Russia) was seen as the battleground of such forces.

But while we are in a kind of war at present; it is striking that the fighting (I mean spiritual struggle) is almost-wholly on one side: that is the side of evil.


Evil is escalating the spiritual war; and 'Good'? What is 'Good' doing?

Well, 'Good' is not so much losing the fight, nor even failing to fight - as lining the streets cheering and waving flags to celebrate the invasion of Satan and his demons to become (or become explicitly and openly) the new ruling class of each nation, of the world.


So we don't have a warfare, we have something like the Anschluss when there was an invasion and takeover of Austria by Germany in 1938; and also - at the same time -  the Austrians wanted the Germans to invade and take-over.

Apart from a small and weak minority; it was all on one-side.

In other words; in this fight there is evil... but there is no Good.


And that is what I perceive around me, what I gather has happened around the world: evil has invaded and taken-over; and everybody (except a small and weak minority) has welcomed them.

The spiritual warfare, the battles between Good and evil - are not in the public arena, not on the town squares and major streets; but in the hearts of a few (invisibly few) individual men and women.


After all, that is where such battles always have been fought - primarily, truly and ultimately. It's just we were used-to seeing some kind of social, institutional, representation of the side of God/ of Good. And that is now absent.

In this current Anschluss, we see only celebration enacted in public; the spiritual battleground, the resistance, is invisible.

The fighting is mostly unobserved - un-seen, and its outcome unknowable; except when we can see for ourselves (and this is not difficult) the defeat of Good, the active embrace of evil.

Great post.
I commented on the last entry in your blog, about the remnant of resistance around here. It's subtle, and I find that when I am vocal about my views to people in whom I have divined some spark of resistance, that they appreciate my willingness to show my colors.

Like the young woman waitress this weekend - we were outside on a deck, but she had to wear a mask in the hot sun. She admitted that a coworker had passed out from the mask, and appreciated our view that the masks are nonsense and bad for one's health.

I'm not making a big deal of it. I'm just always ready to give people some added esprit de corps in this battle, when I see a real soul that has a spark of life within.

Even if we can't do much, as our numbers are small, we can support each other.

@Jacob -I appreciate the effort, but if the best example you have of resistance is a waitress who does not like wearing a mask, supposes that it's non-sense and has a bad story about it... Well, that doesn't exactly fill me with optimism. I meet many such people on a regular basis, and they tend to be on board with every other demand made of them.

But engaging in fellowship with real souls still has value to me, as a spiritual being and as someone who likes to connect.

Saving the masses is not my goal, whether it's futile or not.
Connection is my goal.
Each connection I make to a real soul is precious and valuable.
Comprends?