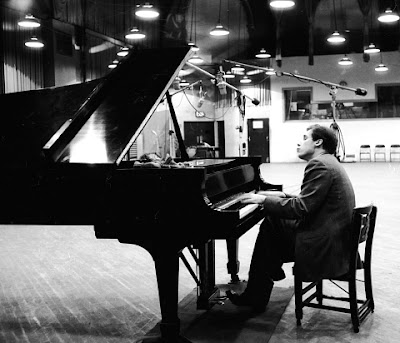 Back in the 1960s and 70s, Glenn Gould used to write and speak about the insulating effects of technology; and the ways in which it could (and did, for him) protect against The World - the way in which technology could surround someone in an ambience of music (and other arts and media); even as it created a supportive physical environment (nourishment, warmth, dryness, security). Technology protected against the threats of nature - or, it could...

This idea of the kind, even 'charitable', nature of technology is one of those ideas that worked - for some people, for a while; but which has turned out very differently from how it was hoped. For Gould himself - at least for a couple of decades, technology really did all this; and sustained an extraordinary intensity of ecstatic spiritual life which came through in his musical performances, writings, and the 'Solitude Trilogy' of radio documentaries.

In the first place, recording technology enabled Gould to stop performing - which he hated. Telephones enabled him to sustain friendships and creative collaborations without excessive human contact (which he also disliked). The capabilities of recording enabled him to produce a closer-to-ideal performance than could be attained under the constraints of 'one take' live music making. Recording in segments (combined with an extraordinary memory) also enabled him to maintain 100% focus even during the creation of long piano works - whereas this is simply not possible in live performance.

And he commented on how much he enjoyed the womb-like (and time-suspended) environment of the recording studio, especially the editing process; where he would display almost superhuman powers of concentration combined with endurance (driving his collaborators to exhaustion and beyond).  And in leisure times Gould would maintain a continuous 'wallpaper' of surrounding music (and perhaps spoken word - news etc) from often several simultaneous sources in his house and while travelling by car.

For Gould, technology allowed a special form of solitude; and he regarded solitude as the pre-requisite of ecstatic experience - and ecstasy as a creative state.

Something similar used to be asserted about the possibilities of the internet - especially in the later 1990s; the way it could facilitate all kinds of good things... It seemed like such a liberation that people forgot (for a while) that the effects of any liberation (freedom-from some constraint) depend upon the strength and direction of motivation (what exactly it is that one wants to do).

Indeed, that state of media wallpaper, surrounding and enveloping technology must sound familiar - albeit ominously familiar - to most modern people; who are never without their 'smart' phones, watches, tablets; ear buds inserted or headphones applied - who are bathed in an increasingly intense electromagnetic medium from wi-fi, 3/4/5G...

The outcome has been something very far removed from Gouldian solitude, intensity, creative ecstasy and other-worldy spirituality. The technology might, it is true, have been used for all kinds of benign purposes; as modelled by Gould and expounded by him. But the fact is - it wasn't.

So, all this promise has of technology came to a situation extremely different, almost the opposite, from that hoped by Gould and others. Something very horrible to behold - especially in the form of social media addiction and compulsion; and the correspondingly soul-denying, materialist, docile and obedient, unthinking and incoherent shells-of-persons who are in the overwhelming majority throughout the most technological parts of the world.

Gould hoped that technology would free Men from stress and toil to liberate the soul for a higher and more refined evolution of consciousness. He wanted most of all a (divine) state of ecstasy in contemplation and creation.

By technology many Men were indeed liberated for a good while and to a significant degree, although now the means of liberation have become the mechanism of enslavement. Because Men used this liberation in almost entirely negative directions.

Constraints are much less significant than motivations. What technology can do is overwhelmed by what people actually want to do with it.

When Men are corrupt and desire evil; every-thing that facilitates the achievement of their desires will (obviously!) do greatly more harm than good. And that is precisely what happened with technology, going right back to the beginnings of the industrial revolution.

Improved means are lethal when ends have been inverted.