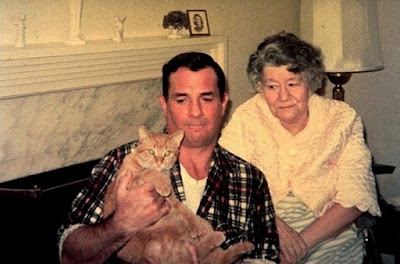 JK at home with a cat and his Memère

Most readers would know the name of writer Jack Kerouac - probably for the 1957 novel On The Road; which had the effect (in popular culture; although arguably this is not what the book actually says) of glamourising the Beat Generation and a counter-cultural lifestyle of hard-drinking, drugs, promiscuity and rootless irresponsibility.

All of which Kerouac personally engaged-in. And then he went on to have a dissipated life of impulsivity; and soon died prematurely of chronic binge alcoholism.

Most people, most Christians, would say that Kerouac was 'a bad man'; and if they wanted to argue in his favour would do so on the basis of his innovative and poetic prose.

Yet one does not have to read much into the biography of Kerouac (or indeed to read his books with care and attention) to know that his motivations were good, and his sins were repented. That he had a sweet nature, and aspired to the kind of life that would have made his Catholic mother, and his pious French Canadian ancestors proud.

But, he was repeatedly overwhelmed by his many moral weaknesses.

Kerouac had saintly hopes and goals; but his actual life was undermined by a fickle, short-termist, hedonic, emotionally labile, often depressive disposition; which he did not remotely have the strength to overcome.

Therefore (much like Philip K Dick) Jack Kerouac makes a test case for our Christian discernment.

In terms of what ought to matter decisively to Christians, Kerouac was a Christian. In terms of what side he took in the spiritual war of this world; Kerouac was on the side of Good. And, except for a period on the middle 1950s when he was a very serious and idealistic student of Buddhism; Kerouac was explicitly a follower of Jesus Christ and wanted more than anything to live eternally in Heaven.

So I am saying that despite-everything (and including that I would not want him as a friend or house-guest): when taken in the proper context Jack Kerouac is Good and plenty of nice-old-ladies are evil.

And this is the sort of spiritual fact that Christians should be able to recognise, and take-on-board.

Very good. Kerouac was a mess, but, unlike his former pals, Ginsberg and Burroughs, he repented. He was sincere, a fatal flaw in worldly terms.

Yes, Charles Baudelaire was exactly the same type of fellow in France a century earlier. I've always viewed Baudelaire as a saint of sorts, a man with an insatiable thirst for the Divine who couldn't find a channel - apart from his writing - to live out his passion for the holy.

I get your larger point, but I'm confused about how we reconcile this with "go and sin no more" (Jn. 8:11) and the story of the Rich man (Matt. 19:21). In my mind, those stories indicate (among other things) a relationship that certain actions follow true beliefs. Or, put differently, that faith without works is dead (James 2:14-26). I do not believe any vice can overpower faith (Mark 9:23).

I think, for example, you are a better example of "nasty-good" than Mr. Kerouac in that 1) you have Good motivations and 2) do not suffer fools and 3) liars, while 4) not consumed by vices. Thus, if we have a pervasive culture of lying, that would make you--both literally and metaphysically--a "nasty" person from the perspective of the dominant culture. The importance of "nasty-good" seems analogous (in moral terms) to the story of the child who saw the "Emperor has no clothes." The oldest form is perhaps the Biblical prophets, who were routinely denigrated, attacked and mocked--until they were proven right.

@Magnus - I can only repeat what I have said for many years; that I do not regard proof-texting as a valid way of reading the Bible; and I think it is essential that even the most valid scripture (i.e. the Fourth Gospel Chapters 1-20) as something that must (here, now, 2020) be subjected to the best possible intuitive discernment.

I share your views on Kerouac I recommend the short piece he wrote the year he died entitled "After Me, The Deluge" -the title seems very prophetic.