No Hiding Place (or, learn from what The Enemy *does*) 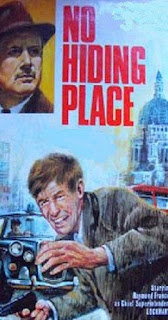 Christians have often commented with dismay on the way that the Totalitarian Left actively seeks-out dissidents. Nobody is left to themselves to 'get on with life'.

As of 2020 when the Global bureaucracy has taken-over; there is No Hiding Place - to quote the title of an old TV programme which used to chill me as a young child.

It seems natural, and necessary, to find a 'hiding place'; somewhere un-known to The Enemy where we may shelter and escape his attention and demands. Why? (those not Of The Left complain) can't They just leave us alone, to live the way that we want?

To mainstream materialistic thinking, this situation looks-like one of a vast System deployed against a series of helpless individuals, each of whom will inevitably be crushed. And that is certainly how things are portrayed, and how their personal situation is described, to those individual dissenters who find themselves the focus of The System.

(I know. I have been there, twice: it tends to feel like Me against The World.)

Yet, if that captured the essence of the situation, The System would not bother about individual dissent. After all; focusing The System on detecting and eliminating each and every incidence of dissent inflicts vast costs and inefficiencies, and cripples actual System capability. Why bother?

Why indeed - if Leftism really was materialist... But it is Not.

Sure enough, Leftism says it is (and acts like it is) a materialistic philosophy at its lower levels (among the un-thinking, un-conscious minions and propagandists); but the demonic powers at the top of The System are driven by spiritual aims: they are fighting a spiritual war.

(Albeit Leftism is engaged in a spiritual war of a distinctively anti-spiritual kind; in other words Leftism seeks to eliminate the spiritual from Life; to track down and eliminate all people who are genuinely spiritual in their thinking.)

And this should be obvious from how modern, world-dominating Leftism actually behaves. Leftism is (after all) about the thought police; Leftism is about propaganda, persuasion, public relations; it is about 'winning hearts and minds' via the censored and controlled (yet attention-grabbing and addictive) mass/social media, a corrupted arts establishment; (fake) news, (pseudo) science. Leftist crusades are quasi moral - abolition, pacifism, socialism, enviromentalism, healthism, antiracism, sexual liberation...

Leftism wants zero dissidence; requires every last person (in every 'hidey-hole' on the planet) to be On Message, With the Program: actively and internally supportive of this-week's moral imperatives.

(This was the clear message and lesson of Orwell's 1984: every single person must love Big Brother: every-single-person, Must, Love... Big Brother.)

And by this demand; Leftism reveals its weakness to those with spiritual-eyes to see: that any single individual person who dissents in thought (no matter how apparently obscure) is a significant threat to The Agenda at the level which matters most: i.e. the spiritual level.

The individual has never been so objectively empowered as here-and-now.

The Global Establishment demands that you, specifically (no matter who you are), decide to be On Their Side.

When the demonic powers view our planet; any dissidence, any one Godly Christian, stands-out of this world like a blazing beacon.

(This, ultimately, is why there is "no hiding place".)

Of course it is vital to The Enemy to persuade Christians that Resistance Is Futile...

Meanwhile, by everything they actually do; Leftism makes clear that any resistance, by any person, anywhere is In Fact a colossal threat to The System - at its primary and spiritual level.

Note: This general phenomenon was brought home to me some twenty years ago when I refused to put my signature to a bureaucratic performance-surveillance document in the university system.

I did the perfomance review, but would not sign-up to targets: I would not formally agree to performance measures. I refused because signing was legal agreement, and weakened my employment protection - by modifying my contract in favour of the employer and with zero advantage to myself. Obviously, I wouldn't sign...

In order to persuade me to sign, I was alternately told that my signature was a trivial formality that meant nothing - so I might as well sign; and also that it was essential that I sign Or Else.

Writing my name at the bottom of my form meant nothing whatsoever, and at the same time my failure to sign was of major concern to the organisation.

This is just an analogy for the spiritual reality. But, in the end, each of us must decide which is the truth about our situation: are we insignificant specks of dust (one among billions), or are we personally a significant threat - whose thinking might, potentially, materially damage the plans of the Global Elite?

One or the other.

Gulag Archipelago has a similar message. The USSR's police force acted as a colossal bullying organization, using all means of torture to get people to sign and confess to lies when the signing or not signing essentially didn't matter -- "everyone gets the same tenner (10-year sentence) in the end" is is the constant refrain. There is a section though, where Solzhenitsyn describes the spiritual pain of hearing one's confession read back to you, years later. Disturbing reading during this time of international house arrest.

This is the other side of the coin of the truth that every, single, soul choosing to go forth into Salvation and Eternal Life, is of infinite value to God, and in a sense can be seen a justification for the success of the entirety of the "mortal project".

In other words, God created the World knowing that there existed a chance that only one of His children, Jesus Christ, would indeed end up choosing Immortality and Eternity, and the rest might in their entirety choose damnation... and this would not be a *terminal* catastrophe for Him.

Likewise, for Satan, every single individual who chooses salvation and to follow Christ, is a fatal blow to his Totalitarian project. The totalitarian project must be exactly that, TOTAL, in order to be considered successful. As long as there are slivers of light shining upon it, it is an utter failure.

Satan´s position might seem unreasonable (Surely having almost all of the world volutarily submitting to a full-spectrum Totalitarian Project of total damnsation and Hell-on-earth is a big success, no? Reason for celebration).

But no, because Satans ultimate goal is to destroy creation and prove to God that his way is better than God's. As long as there is even a sliver of light, of creation and order, whatever little it may (seem to) be will always enough to prove God right, and satan wrong.

Thus even the smallest flicker of light and creation, in an (apparent) sea of wordly darnkess is a vital threat to the Totalitarian project, and as long as it is not *snuffed out* (and in an ultimate metaphysical sense, it can´t), signifies the ultimate failure of that project.

The image reminds me of recent pictures from Paris where motorists clogged roads for many miles in an attempt to escape the most recent lockdown.

Your comment about not signing a "bureaucratic performance-surveillance document" reminds me that in my state (Michigan), the governor has mandated that all bars and restaurants now collect the name and telephone numbers for "contact tracing." If a patron refuses, they are to be denied service. If a business refuses to perform said surveillance, then their business can be fined and/or shut down.

It feels like the public is the proverbial frog in the pot of water over the stove... the heat is on, people.

Gary - I daresay my basic understanding of God and salvation are different from yours; but at any rate I think you go a bit too close to presenting God and Satan in a 'symmetrical' way in your comment: as if they were something like two alternative creations, two alternative possible realities.

But a scheme of creation and a scheme against that creation are not similar alternative possibilities, and negative anti-creation cannot succeed in an ultimate way --- whereas creation already-has succeeded in a qualitative sense. There already is Heaven, inhabited by resurrected eternal Men, and Satan can do nothing to change that fact.

Funnily enough, I agree 100% with what you have written in the second paragraph of your response, so obviously I failed quite badly to get my point across properly!

I wasn't aiming at drawing a full symmetry between God and satan (which would be to say something like that there are two metaphysically primary possible worlds which could be chosen, which are negatives of each other) -

rather, that the truthfulness of your observation in your blog post (Totalitarianism requires total acceptance on every level to be sucessful - anything less is a mortal threat to it) follows naturally from the fact that a single saved soul is of infinite value and importance.

I don´t know if the latter assertion is generally accepted by Christians as a fact, but as far as I can reason, denying that would entail that satan actually can inflict serious, significant and permanent harm on God and His Creation. This in turn would imply that satan´s rebellion has a grain of sense to it, as any permanent damage to God and Creation would be a non-zero-sum victory for satan, which in turn would mean God´s plan and creation are not completely coherent or Good! Which is, for a Christian, unacceptable.

@Gary. True, in one way. In another way, individual free will would always mean that people are free to reject the offer of Jesus. Love cannot be coerced, by its nature - and most people know of many mortals who reject love as the principle of reality.

Much as so many people apparently would not recognise Jesus during his ministry, despite his actual presence, miracles etc. it is clear from the Gospels that many chose to regard him as evil.

I also believe that there are those who choose neither Heaven nor Hell, but other destinations - for example, none of the other global religions have the same goal as does Christianity. Some offer a paradise of idealised earthly pleasures inhabited by immortal men; others a blissful Nirvanafor spirits - some what sounds like annihilation and may well be complete un-consciousness.

My presumption is that God would (in general, in some experiential way) allow all of these as possible destinations beyond mortal life for God's children - and such souls would also be lost to Heaven, perhaps forever.