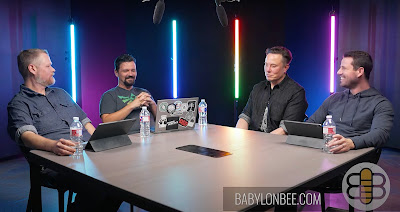 William Wildblood had a recent post that provoked me into some thinking about The Antichrist, and what we might expect such a Being to be like and to do in our current context.

When he appears he will not be obviously evil like some of the despots of the 20th century. He may even appear benign by the materialistic standards we have built up over the last 2 centuries. But he will seek to divert us from true divine understanding and spiritual life. We need to understand that anything or anyone that promises happiness and fulfilment in this world, whatever it calls itself, is not of God.

This meshed together with what strike me as absurd expressions of optimism from some Christians at the prospects from Elon Musk having taken-over that most egregious of all social media: Twitter.

Apparently; Christians are supposed to rejoice that the prime apparatus of societal corruption will now be operated more efficiently and inclusively!

Yet, EM is, of course, precisely the kind-of-person we would expect in an Antichrist figure. That is, Musk seems to be among the more-pleasant and less-evil of the obscenely rich globalist oligarchs. His is the 'acceptable face' of the Great Reset - despite implementing the 'Skynet' infrastructure - surely one of its vilest aspects.

My point is that Musk is just the type of individual who can serve an Antichrist function; whereas anyone who is an obvious villain or psychopath (or actively and explicitly anti-Christian) is not suitable.

You might suppose that Christians would be alert to the problem, because Musk certainly is not a Christian. Yet, with EM, people are always adding 'but at least'...

As Wildblood makes clear; the core objective of evil in these times is materialism and denial of the primacy of the spiritual - of God and creation. To focus men's minds exclusively on this-mortal-life in this-world.

Exclusion of the spirit can effectively done by channeling concern into 'good causes', potential utopias, vast social aspirations... as well as the more usual tyrannical oppression, induced self-hatred and 'gaslighting'.

I don't believe that EM is the Antichrist - but Antichrist is a type; and Musk is of that type.

If or when 'The' Antichrist does emerge onto the world stage - we should expect him to appear as just such an apparently personable, Christian-friendly, social idealist.

The emphasis on "The antichrist" singular is itself a problem.

I'm not inclined to give EM the benefit of the doubt. No one gets that rich without being comped, and that's even more true in as fundamentally dishonest a line of business as that of "eco-friendly" coal-burning cars. There's also something about his physiognomy that makes me not trust him, though I can't put my finger on it.

If he really removes censorship on a major platform, that would be a blow against the Ahrimanic establishment -- but absent a real Christian revival, all it will accomplish is an acceleration of the Ahriman-to-Sorath transition that is already underway.

Good post Bruce I totally agree with you, Mr Musk is the one who wants to turn us all into Cyborgs in order to save us from AI. There is indeed something about his physiognomy just as there is with Zukerberg and that women who ran Theranos Elizabeth Holmes there is something other worldly about them.

I've thought about your skepticism about Second Coming teaching. In my own perspective, I don't have strong feelings either way, it could be true or not. It's not something that really speaks to me like Resurrection after death and Eternal Life.

My recent thinking about it, "why do so many that I really respect and honor speak of the Second Coming so surely, if it's not true?" On the one hand, it could be true, and just not something that interests me, so I don't feel anything about it. On the other, maybe it's a teaching meant to be soft for those who can not bring themselves to face the certainty of death, but that is designed to strengthen them against the transhumanist (antichrist) temptation. That certainly seems to be how it has worked out for my mom. She always maintained when I was young that she had a strong feeling she would live to see the Second Coming. It gave her something to look forward to. When she died, she faced it bravely and with peace, even having a little laugh about how He'd better hurry up if she was going to live to see the Second Coming. She died in 2020, which was a crazy year for sure, so she maintained that little hope right up until she stopped being able to follow any news.

My point being that many people might need some kind of "Santa Claus" belief, more symbolic than literal, to help them keep heart and avoid the fake hope offered by antichrists.

Which is why I really appreciate your encouragement to imagine and be motivated by eternal life in Heaven. It speaks to me much better than Second Coming teaching, which I never really could get interested in, but which I've seen work for others, protecting them from the antichrists.

Concrete example: new Tesla cars have occupant facing cameras, which feed into a “black box” and are always internet connected. Yet people ignore this obvious, horrible privacy intrusion because EM is a hero or the like.