And did those feet? Jesus in England 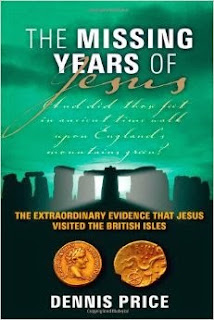 I will not try to persuade anyone, and it is not a matter of Christian importance - but I personally believe the legends that Jesus came to England in his youth, with Joseph of Arimathea: I just cannot help it, and it gives me great satisfaction!

Not because the evidence is in any way overwhelming - although there is some; but (presumably) partly because I spent my school-days just a few miles from perhaps the main place He is supposed to have visited (Priddy, in the Mendip Hills); and partly because it fits with my general understanding of what seems like the special role of England throughout the history of Christianity (including the role of that Englishman abroad - Joseph Smith).

Anyway - if you are likewise inclined, I have found a very enjoyable and engaging book on this subject for you; a book which collects pretty much all of the legends and stories of Jesus in England: The missing years of Jesus: The extraordinary evidence that Jesus visited the British Isles by Dennis Price.

The idea is that this visit was between the ages of 12 and 30, and was prolonged; but it was not part of Christ's ministry and He did not perform any miracles; but rather He was engaged in some kind of 'work' relating to the metal and stone (tin, perhaps silver, mining and smelting) trade and business interests of Joseph of Arimathea (who is here presumed to be Jesus's uncle).

I need to point-out that this book is not really Christian. I mean it is compatible with Christianity, but does not seem to assume that Jesus was the Son of God. It is written from a New Agey perspective - for instance, the lurid cover has a picture of Stonehenge, which Jesus is presumed to have visited.

Indeed, one thing I liked about this book's speculations was its linkage of Jesus's visit and residence, with the Neolithic monuments, about which I also have off-beat beliefs (i.e. I suspect some of them are relics of a proto-Christian, literate, monotheistic civilization).

Incidentally, Stonehenge (unlike some of the earlier monuments such as Silbury and Avebury) is here interpreted as essentially a demon-and-ghost-haunted place of death: animal sacrifice, and probably human sacrifice. So Jesus's visit is argued to have had the nature of an exorcism and new sanctification.

Aside, there are some good bits of scriptural close reading; for instance, I was convinced by the collection of passages which seem to indicate that Jesus (age thirty-ish, at the time of his ministry) was treated as unfamiliar by many people in the gospels, and was not immediately recognizable even by those neighbours and family who would have been expected to know him (not even to his cousin John the Baptist).

This seems to be there in the text; and is interpreted as evidence that Jesus was absent from Nazareth for many years during which his appearance changed.

Of course it doesn't mean He must have been in England; but He might have been...

Of equal interest would be an account of his travels there and back.

Every line in the Bible, even the complete Catholic/Orthodox Bible, comes from other cultures, and some stories may date back 15,000 years to the original Eurasian cults.

@sykes - There is ample evidence that Jesus existed, but - like all evidence - it can be explained away and revised as inconclusive.

Likewise, the resonances of the gospel story in other cultures can be seen as evidence of God's revelations and prefigurings - or it can be taken as explaining-away.

I should say, though, that unless one has a tin-ear for narrative, the story is Jesus is *utterly* different from anything else cited as a parallel (using reductive piecemeal reasoning).

The real debate is not concerning the existence of Jesus; but whether or not he was the Son of God - our Lord and Saviour/ what that meant. This book seems agnostic on this matter - says nothing against the Christian view of Christ, but does not seem to have faith in its truth.

As I have often said, evidence does not settle these matters - not least because what counts as evidence, and what evidence means, are both affected by prior assumptions.

Christianity is about faith/ belief/ revelation/ personal choice - there is evidence on both sides, but never conclusive - it *must* be personal: if that is not seen as unavoidable then the essence has been missed.

Blaise Pascal (one of the most intellectually brilliant men ever to have lived) described this for us moderns in his Pensees.

I find it quite laughable that those who embrace an anti-metaphysics that would have us confined to a "life" of the redundant phenomenon then use the redundancy of Christ's very steps to refute his existence. Exactly. If only a man could make his every step unique to his universe!!! He would then actually exist, I suppose?

I hadn't heard the story before I read your posting. I am intrigued. Of course, where he visited or lived was so much less important than where he "lives" now. Or am I wrong?

Please note that I am wrestling with issues related to my foregoing question at my blog, Beyond Eastrod. Please drop by and offer your answers to the question I have posed today.

@RT - No, it is not important either way. But it could indicate why the British Isles had such a repeatedly and disproportionately vital role in the history of Christianity; and reinforce the authenticity of the Western strand of Christianity.

If we can legitimately imagine Christ walking under the cloudy Western skies on the moist grassy hills of the West Country - this balances and enlarges the usual picture of Him at work in burning heat and arid semi-desert.

I like these posts. I like how your affection for the Christ and for your homeland show through.