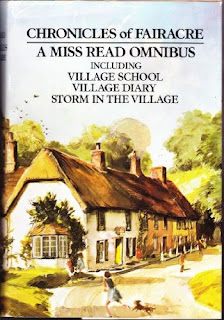 I have known of Miss Read's stories about the imaginary English village of Fairacre since the mid 1990s - they are excellent light reading for those of a countryside-loving and Anglophile disposition.

They have also passed the stringent test of being read-aloud last thing at night with my wife, including re-readings; and only a small subset of books have proven able to meet this exacting standard.

The literary conceit is that (most of) the books (not all of which I have yet tackled) are written in the voice of 'Miss Read', the spinster headmistress of a small primary school; and over twenty volumes they form a chronicle of life in the downland village with its various characters over a time scale of (I guess, approximately) the 1950s to 80s.

The reason the books are worthwhile is that they are so deft, witty and well-observed (the author, whose real name was Dora Saint, used to write for Punch when it was the premier British humour magazine) - and because the books are good-hearted.

The character of Miss Read herself is very likeable, with her wry self knowledge of her own limitations and faults; and her appreciation of (and exasperation at) the multi-generational cast of well-defined, traditionally-English, characters that surround her.

Sooner or later, here or there, pretty much the whole of life - as seen and described from this particular perspective - is woven into the tapestry. 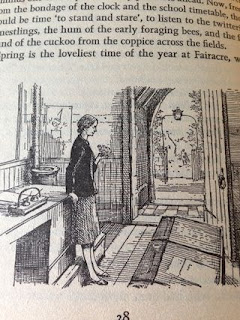 This looks very promising. Off to Amazon I go!

@Adam - I would advise reading (to see if you like it) a book from the middle of the chronology, after it had got-going. The first book (focused on the school) is a bit different from the others, the second somewhat so (in diary form).

I ordered an omnibus of the first three novels. Should I start with the 3rd?

@Adam- It would seem a bit perverse... My point was only that a person might enjoy most of the series, but not be 'grabbed' by the first. (Although Miss Read would speak very sharply against 'grabbing', I'm sure.)