Review of Jonathan Strange and Mr Norrell by Susanna Clarke (2004) 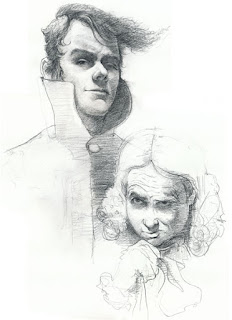 I simply cannot believe how good this book is! It strikes me as one of the very best novels I have ever read, and one which will change my life and the way I think about things.

I am also bewildered as to how I have missed it for the past eleven years - indeed, when I was on holiday I picked-up a copy three years ago and leafed through it; then replaced it on the shelf unread.

I can only assume that I was put-off by various off-putting aspects of the book's presentation to the reading public which rubbed me up the wrong way.

(Apparently, an extreme hype; endorsements by 'the usual suspects'; the fact that it seemingly emanated from the world of professional publishing - and was, therefore, likely to have been expertly crafted to impress.)

Well, I eventually got to read the book through watching the first episode of a BBC TV adaptation, currently running - and being caught-up, liking it very much (the episodes have since declined a bit) - found it running in my mind... I was on holiday in the country when I felt I could not delay reading it. I did not want to wait to buy a paper copy - so I obtained it on Kindle.

But whatever it was that delayed my engagement; I was wrong, wrong, wrong! This is a truly wonderful book - a labour of love, deep, wise, inspired - extremely well-written and constructed - absolutely fascinating, and (plot-wise) un-put-down-able.

I have been living in its imaginative world for the past week - and already things look different.

(And I haven't even yet read the extensive footnotes, which some people say is the best bit!)

Jonathan Strange and Mr Norrell is in the 'fantasy' genre; about magic, magicians, fairies; set in the early 1800s (and written in a semi-pastiche of the style of that era); and in an England (a world) where there is the back-story of a 300 year period of the middle ages during which the North of England was ruled by the greatest-ever enchanter (a human stolen and reared by fairies) called The Raven King - whose capital was Newcastle (i.e. the city where I live!).

So, one way and another; there is another English genius - and her name is Susanna Clarke. 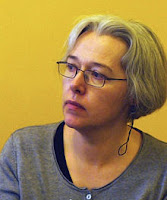 I like the book as well -- it's a fairly regular re-read. That said, the fairies and fairy-kingdoms have an inert and icy quality to them -- more or less the opposite of what (I should hope) Tolkien would have meant by the word 'Faerie'!

@Ara - Indeed! But it taps into a strand of folklore of (often) selfish, cruel fairies - much the same one as used by Terry Pratchett in Lords and Ladies, or The Wee Free Men.

From what I remember, the Wee Free Men are an entirely different set of beasties, being arguably a force of Good -- more or less embodying the positive virtues present in independence, loyalty, and drunken rioting. True, they do not embody the virtues of politeness, civilization, or property rights, so are not the kind of Good you just sit down and have tea parties with.

On the other hand, it's precisely because the man with the thistledown hair has not the slightest idea of what loyalty or friendship is that his continual attempts at these things are so appalling.

I have just finished reading this wonderful book having been captivated by the poorly received BBC adaptation. Loved the wit and style with which it was written. Felt there were several loose ends waiting for the sequal (Stephen Black and Mr Childermass?) which has sadly not yet been forthcoming. Hopefully one day......

@Dd - I think Susanna Clarke is a very serious writer, who will not rush her sequel - and Strange and Norrell itself took about a decade to write. This, I think, is one reason why it was so very good - with such depth and reality to its alternative world. She in the spirit of a leisured amateur writer - like Tolkien, so this is a compliment; and by contrast most professional fantasy writers are hasty hacks.