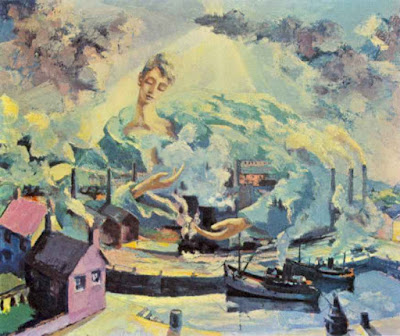 In some situations such as a ritual, the entirety of a tribe may see spirits - but the modern Western anthropologist who is also present sees nothing. Are spirits really there?

Most Western people would say no; and they would explain-away the observing of spirits as some kind of group hypnosis, or wishful thinking, or a conjuring trick of the shaman... or something. Because modern people know (or rather assume as a metaphysical certainty) that spirits don't exist - therefore it doesn't matter what people say or claim: there were no spirits.

Implicitly, therefore, the modern Westerners claim that all people who see spirits are unreliable, and over-emotional, gullible, unintelligent, immature, dishonest - or something of the kind. When whole tribes or societies claim see spirits - then this is exactly how modern Western people actually, in practice, regard them (although of course they are too afraid, or feel to guilty, actually to say so).

Yet there is something different about spirits... The Western anthropologist and the tribe he is studying all see most things in common - they see the huts, the spears, the food, the animals... but when it comes to spirits the tribe see them and the anthropologist doesn't.

There is something different about spirits - are the really there?

One thing than can be suggested is that there has been a change in human consciousness between the traditional Tribal Man and the modern Western Man. Tribal Man may regard stones as alive and plants as conscious... and he sees spirits.

All true - consciousness differs; but since we are not postmodern relativists - we can still ask what is really going-on. When Tribal Man sees a spirit - is there an object there, or not?

My understanding is that the seeing of spirits is an example of what Owen Barfield calls Original Participation. There is a spirit, but there is no object because it is immaterial - and the evolution of consciousness  includes that Modern Man cannot perceive the immaterial...

Why is this? The given answer is that by Not seeing the immaterial, Modern Man is made free.

That which we perceive makes us passive - it is given, we are not free not to respond to it - because the mechanism by which we know it is unconscious. Tribal Man sees spirits, and spirits dominate him in the same way that Modern Man is dominated by whatever he sees.

Where Modern Man goes wrong is is asserting that because he cannot perceive spirits (and neither can he detect spirits with any technology), the spirits are not there: typically, Modern Man claims that the imperceptible does not exist.

A Man in Final Participation would consciously know that spirits were present, would know about them (what kind of spirits and where) - but he would not see, hear, touch smell or taste spirits. What is the advantage in that? The answer is Freedom - the answer is Agency.

In Final Participation knowledge is in conscious thinking (i.e. 'primary thinking') - hence all knowledge is thinkable, all thoughts are inter-relatable.

All (primary) thinking (in FP) is real and true.

But the perceiving of Tribal Man is Not real and true - because perceptions are not complete; because all perceptions need to be interpreted. Tribal Man may see spirits, but he must still make sense of what he sees, and there is no guarantee that he will understand spirits correctly - indeed different people in the tribe will probably interpret what they have seen very differently.

Seeing is Not believing; because seeing is incomplete.

Hello Bruce are you familiar with man named Julius Evola? He was a 20th Century italian philosopher that had written many works on problems with modernity, the occult, and traditionalism. Since you started blogging about Colin Wilson's "the Outsider" and Rudolf Steiner, I couldn't help but remember him and I wanted to your thoughts and opinions on him, mainly his concept of riding the tiger.

@Mark - I have heard of him, but somehow he doesn't appeal...

It is worth mentioning that visual sight alone is probably not how spiritual entities are usually actually perceived, regardless of how people report such experiences. Actual vision is a complex interplay between imperfect ocular photosensitive organs and a set of mental (and even neurological) assumptions that allow us to discount the "reality" of such things as 'floaters' (transient images produced by remnants of organic tissues left in the viscous humor of the eyeball after creating the retina). Another example is right in front of me, my monitor has a blue LED to indicate power status, and the light from this LED leaks through the seam of the monitor housing and falls on a sheet of paper. I can see this light momentarily when I first look at the paper, but my optical processing erases it as a meaningless anomaly within seconds (usually within one second, if I look at it directly). I can verify that this spot of noticeably blue light is a real phenomenon, but I cannot properly see it just by looking at it.

And this is light I can in fact detect with my eyes, and intellectually know to be a real visible input. My brain simply edits out the anomalous input because it cannot distinguish it from commonplace transients that really are the product of mere defects in the optical organs. I'm not certain that 'spirits' commonly produce signatures of visible light, but the available evidence that they might suggests that it is usually below the threshold at which our visual processing is prone to filter out even verifiable real inputs as anomalies.

My own experience (and substantial literature exists to suggest it is not a unique one) is that spiritual phenomenon are most easily perceived without reliance on visual senses. Many references to "seeing" with spiritual or 'inner' sight describe closing the physical eyes (or being the result of blindness).

@CCL - I think what you are describing is the late stage of what Steiner (and Barfield) calls the Consciousness Soul era - i.e. the current one; in which we not only cannot see (or otherwise perceive) spirits, but have also learned to distrust perceptions (that - until the age of science) were simply taken for granted.

And to distruct reason. To distrust all positive statement, in fact.(After all, we might be insane, but not realise it.)

The scientific metaphysic (materialism, positivism, empiricism, evidence-based thinking...) thereby consumes itself, is self-destroying. We doubt even our own thinking.

Once IN this state for any length of time, it is difficult to get out - but most people who do try to escape (rather than simply obliterating consciousness with distractions) usually try to return to a previous naivety. However, the innocence of ignorance cannot be recovered.

Yet the state of nihilism is itself incoherent, when positively stated (one cannot argue *for* nihilism, there can be no evidence for it, no reason to support it... perhaps it can best be described as a state of existential fear - fear that nihilism may be true and inability to find reassurance that it is not true.)

What Steiner and Barfield offer is a way through nihilism and forward. The state of nihilism is something which must, indeed, be got through - it is a necessary phase in the attainment of freedom.

As I understand it, the *only* way out from nihilism is by metaphysical examination - and by the decision to rely upon intuition. That is: We expose and examine our primary assumptions about reality; and then we make the assumption that we will base our future metaphysics upon the primal personal act of intuition that intuition is valid.

That becomes the base for *everything* else - but that intution cannot be given by anybody or anything, but each must know it for himself or herself; and that can only happen by active thinking (I mean, it doesn't just come-upon a person, it must be sought).