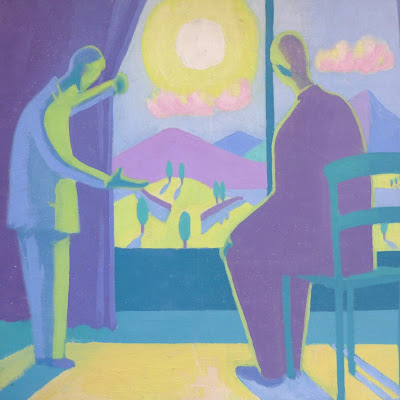 Colin Wilson wrote extensively - from The Outsider-Religion and the Rebel (1956-7) about the need for a change in 'perception' - such that the disaffected and alienated modern consciousness could learn a more visionary, wide-ranging and meaning-full mode of perceiving reality.

One explanation he came to favour was related to the insight he derived from Husserl that perception was intentional; that in fact we 'grasp' reality actively... or at least we should do not. Perception should not be passive - and we should not merely accept the way that we perceive from 'society'.

But how to do this? Wilson wrote a lot about this, but somehow none of his suggestions really worked for me: certainly they did not work well-enough to induce any significant or lasting transformation of my consciousness.

A big part of this failure was my rejection of God in general, and Christianity in particular. But a further aspect was that I could not really understand how I might change, for the better, the way I perceived - trying didn't seem to help.

I now see that the best way to approach (which I think implicitly Colin Wilson did himself - to some extent - but did not explicitly understand it in the way I am outlining it here. The insight derived from Rudolf Steiner's early philosophical work culminating in Philosophy of Freedom (1894). Steiner developed a metaphysical description of knowledge that described it in terms of Thinking which is as a consequence of a Percept (sensory perception) and a Concept (idea) - it is the joining of a Percept with a Concept that enables us to know.

Extending Steiner; it is clear that valid knowledge depends on the Percept being joined-with a True concept; and access to True concepts is something that all men have when thinking with their True Self. The True Self provides valid concepts because it is divine - that within-us which is divine.

My point here is that we cleanse The Doors Of Perception (the phrase is from William Blake) Not by doing anything with our senses (as implied by Aldous Huxley in his book of that name, concerning his use of mescaline). Nor by simply allowing our natural spontaneous consciousness to emerge - by losing control (e.g. by drugs, trances, in sleep, in Zen, in psychosis... various of the sixties counter-culture ideas) because that is hardly conscious at all.

Not by changing perception or suppressing consciousness; but by developing thinking in the direction of further consciousness and purpose; which means thinking-from our divine Self.

As both Steiner and his 'disciple' Owen Barfield saw; this requires understanding how Jesus Christ made this kind of thinking possible: made it, indeed, Man's destiny, Man's proper path in being offered the opportunity to become more divine; to become God-like: a godling or child of God.

All that is necessary - but we need to be clear that the doors of perception can be cleansed, as Wilson stated more than sixty years ago - but cleansed indirectly, by a transformation and strengthening of thinking.

I think it is correct to assert that true intuition is a marriage between thought and that which is thought about - that therefore it is a grave error to assume that we need to "clean our senses" and "let things in as they are" as the purest way to access truth. How would we even know that we were "letting something in" if we weren't actively aware of this? How would we even perceive something as "true" if we were just being inundated passively by it? We'd have no gauge of what was going on, no reference, no anchor... taken to its last conclusion it's incomprehensible because it's contradictory.

Thinking, and therefore thinking truthfully, is a fundamentally active process, which requieres something to think about, to be sure ("contentless thought" is also a contradiction), but which arrives at truth by operating according to it's own rules, and applying them correctly (which requieres a "meta-thought" about what is the correct way to apply them... clarifying this "meta-thought" is the goal of philosophy, in my opinion - the goal of Metaphysics being to give us the primal ground of being, which among other things would allow us to "justify" our "meta-thought" by ensuring its congruity with something outside itself which is taken as the most basic source of truth. And acceptance of any metaphysics is ultimately an act of faith - how could it be otherwise?). I think this leads us to semi-platonism, inevitably, because it posits the reality of concepts as independent - however, it needn't be platonic in the sense that it does not necessarily imply that these concepts are immutable and eternal (I think Plato's obsession with immutability and eternity was acquired by virtue of his living and working in Classical Greece, and are not necessary corollaries of his most basic and important ideas).