A world immune to miracles, but which needs (and gets) billions of miracles every day... 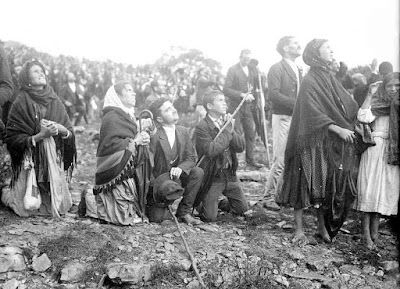 Some of the thousands of witnesses of the Fatima miracle of 1917; an event effortlesslesly rejected by modern pseudo-skeptical materialism - on the prior (but dishonestly unacknowledged) metaphysical assumption that miracles cannot be real.

I am reading an interesting and amusing book called The Rough Guide to Unexplained Phenomena by the (late great) John Michell and Bob Rickard - and it struck me that, although some people call for miracles to 'prove' the reality of God; the modern world is immune to miracles.

Indeed, I think it would probably be counterproductive; because a spectacular mass miracle would surely be interpreted materialistically - as a mass psychosis, or mass deception, a mass scam, or an example of mass mind-control. Certainly, an impressive miracles seen by thousands of people would not be taken as evidence of the reality of a God who is the creator and our loving Father.

At the level of phenomena, reason and communications; there is a vast (and unbridgeable) gulf between what really happened in a miracle, and the understanding of what happened, in the minds of Men - and this gap has been made de facto infinitely great by the assumptions of modern materialist metaphysics.

We can see that the only kind of knowledge that will suffice for Modern Man is knowledge which is absolutely direct (without any mediation of sensory data, communication, reasoning etc) and absolutely personal (not secondhand, not based on report of others, not dependent on authority).

In other words; Modern Man needs knowledge which is conceptualised as direct and personal - and might be 'explained', perhaps, as either transmitted directly mind-to-mind; or else comprises minds in sympathy, or empathic identity, knowing exactly the same reality: as many minds thinking the same thoughts.

Therefore, the miracles we ought to be looking for are for our-selves not for 'everybody', and their job is to be graspable, wholly know-able, solidly believe-able by our-selves.

(And so Not a generally-observable public phenomenon, buttressed by that kind of 'objective evidence' that would (supposedly, but not in actuality) prove a miracle to hostile, materialist skeptics...)

And what we seek, we will find: Because personal, direct miracles are needed by Modern Man, therefore miracles are supplied, and in abundance, by our loving God. It is merely a matter of choosing to notice them.

My first thought was:
"The Book of Mormon".

Your analysis is very intelligent, but seems to me to founder when you say we need mind to mind conceptual transfer.

Perhaps the problem is your insistence on knowledge.

It's like when you're in love, all the love songs suddenly make sense, even though you haven't received any new conceptual knowledge.

Maybe the problem is looking for conceptual knowledge, which is always symbolic, and thus a matter if interpretation.

Its not that conceptual knowledge is wrong or unnecessary - but it can never be primary, and never be convincing, because concepts are always symbols for something and never direct.

I just thought this (from Saints, the brand new history of the CJCLDS Volume 1, pg. 78,) was fun:
"Joseph had translated the text of the Book of Mormon in three months, assisted by one scribe at a time. It would take Grandin and a dozen men seven months to print and bind the first copies of the 590-page work."

@U - "you say we need mind to mind conceptual transfer.
" That's not what I believe, in fact I think it is wrong - I believe what Rudolf Steiner said in Philosophy of Freedom.

Love, whether sexual or another kind, is a concept, but a concept you cannot fully grasp except when you are experiencing it.

Romantic love can be a good example of this concept being transferred mentally because of the peculiar difference between requited and unrequited love. One simply does not understand the concept of feeling mutual love except when one both expresses and confirms it through means that are largely beyond the capacity of human language.

We even refer to those signals of mutual love as "miraculous". This is a metaphor, of course, since sexual love simply does not compare with the intensity, scale, and depth of divine love. But it is a telling comparison.

@CCL _ yes, I disagree with CS Lewis that there are four kinds of love - There is only one kind of love, and that includes divine love; the types are only subtypes and different intensities etc. The difference is essentially quantitative.

Fatima 1917. I have read that soldiers witnessed strange signs in this and other wars. WWI was often deemed a turning point in modern history. Perhaps there is something about extremely traumatic collective events. And the belief that events on earth can be mirrored by heavenly or spiritual counterparts. Josephus, in Wars of the Jews, regarding the circa 70AD holocaust of Jerusalem and the temple, wrote: "A certain prodigious and incredible phenomenon appeared. I suppose the account of it would seem to be a fable, were it not so related by those that saw it, and were not the events that followed it of so considerable a nature as to deserve such signals; for, before sun-setting, chariots and troops of soldiers in their armor were seen running about among the clouds, and surrounding of cities." Tacitus echoed this account, though he was likely skeptical of its objective reality. Josephus and others told of other miraculous events, as well as drastic secular happenings that coincided with the warnings of Jesus about the end of that age or world of sacrifice and law, yet within the generation of his listeners. Maybe Fatima and like miracles exist like Barfield's "unrepresented", seen or heard by those with eyes to see or ears to hear. I have only now begun to dip my toes into Barfield, because of this blog, so i may be misunderstanding it.

"Maybe Fatima and like miracles exist like Barfield's "unrepresented", seen or heard by those with eyes to see or ears to hear."

I think that is correct.

It's like the tribal shamans perfoming magic in the presence of Western anthropologists. Sometimes everybody present can see the spirits (for instance) - and finds them of great practical value in real life - except the anthropologist. And I have seen the same in science and in medicine - many cannot perceive what to others is obvious.

Seeing isn't believing, instead belief is necessary to sight.

I myself am not prone to confuse perceptions based on spiritual senses with those that come from my physical senses. But I am also well aware that my physical senses are unreliable, and of the ways in which my mental faculty normally filters out anomalies. For instance, as I sit here looking at a computer screen that I know to have a uniform value of brightness, I am easily and even unconsciously filtering out the visual artifacts caused by imperfections in my eyes. Or rather, I was doing that before I stopped in order to verify them. Now I've effortlessly resumed filtering them out again.

Of course, those visual artifacts are not important. What matters is that the human mind is readily capable of that kind of perceptual filtering of 'unreliable' information, and certain kinds of training (to distinguish whether a sensory phenomenon is "real" based on whether it conforms to an external physical object) can cause it to be applied to most spiritual perceptions.