How was Rivendell defended in a siege? 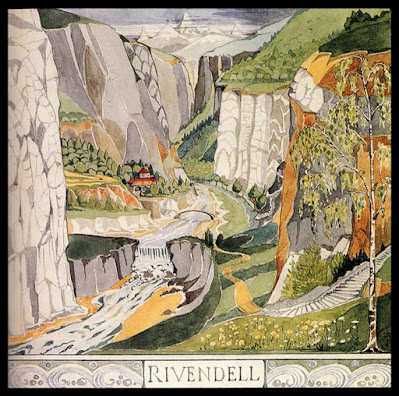 Fortress Rivendell? - not much...

Rivendell was located in a hidden valley; and, while it is obvious that being hidden was a helpful defence - I find it very difficult to imagine how a valley was defended when the enemy had succeeded in locating and attacking Rivendell.

Rivendell was twice besieged by Sauron - once in the second and again (by the Witch King of Angmar) in the third age (there is a description in the History of Middle Earth of the near starvation during one of these sieges).

But I cannot understand how - at least in a material military sense - a valley could be defended; since castles are always placed upon raised ground. To be located in a valley allows the enemy to approach unmolested, and gives height advantage in hand to hand fighting - while allowing the enemy to rain down projectiles from the valley sides. Furthermore, it seems that the house of Elrond itself was not fortified - at least, this is never mentioned nor depicted by Tolkien in his drawings.

However, since Rivendell did indeed withstand two sieges, despite being in a very disadvantageous location; I think we must look elsewhere for an explanation.

My best guess is that it was defended by High Elf magic, in some way analogous to the Girdle of Melian - which was an encircling, magical barrier cast by Melian, wife of Thingol Greycloak - around the Sindarin elf kingdom of Doriath. This (usually) caused the unauthorized to become bewildered and lost - to die of starvation.

It may be that this was how Rivendell was 'hidden' from hostile eyes - because otherwise Saurons winged servants (such as crows) could surely spot any large valley - no matter how flat the surrounding landscape.

Perhaps during the sieges of Rivendell, the forces of Sauron could not find the valley; or (at least, not without the physical presence of Sauron himself) could not get through it and into Rivendell. Perhaps their plan involved starving the elves towards a point where the barrier would weaken or break?

Yeah I thought about this too and put it down to magic.

I expect that it would have involved mountain fighting and guerrilla harassment, similar to Xenophon's Anabasis. The valley proper may have been abandoned immediately to the military opponent, whose logistical problems would have been immense. The defenders' supplies would be cached throughout the area, and their goals would have been to deny movement and supplies to the invading force. An army would not have been safe in the valley, even if they reached it, as the river could be commanded by Elrond.

Tolkien's military experience, of course, was the Battle of the Somme...Valley. I think that this is likely just coincidence though, as the Somme seems geographically nothing like the Lauterbrunnen that inspired Rivendell.

In fact, the defenders of a valley have many advantages over the attackers, particularly if the surrounding elevations are some combination of high and precipitous, and possess no passes (or none that cannot be effectively guarded), meaning that the assault has to be concentrated at a single point, the main entrance to the valley. Defenders in this case will be able to utilize the following:

* They can place their main defense at whatever point offers the best combination of narrow frontage and locally advantagous terrain (rivers, cover, local high ground that benefit/can only be accessed by the defender, etc). The enemy will have no choice but to assault them here if they wish to assault at all. Further advantage can be gained by placing fortifications here and setting gravity-based traps (rolling logs, falling stones, etc) along the defiles which the enemy must traverse to even reach the defenders. The battle of Morgarten, where a smaller and less well-equipped Swiss militia were able to devastate the cream of Austrian chivalry, is a good example of how these principles apply in practice.

* By forcing the battle at a narrow choke point with no chance of surrounding them or launching a flank attack, the enemy's numerical advantage is effectively eliminated and will tend to be to their disadvantage. If the defending force is significantly better equipped/of better fighting quality than the attackers, this kind of situation can quickly turn into a massacre of the attackers once the hand-to-hand phase of the battle is reached, as inferior soldiers must confront their betters head-on while their formation is disrupted by being pushed from behind by others coming up and having to clamber over the bodies of their already-fallen comrades. Thermopylae, which only turned in favour of the massive Persian army once a traitor showed them a pass which allowed them to surround the Spartans, is a good example of this type of battle. In the case of Rivendell, I think we can safely assume no traitors, no pass, and that the Elves are far more superior to the Orcs than the Spartans were to the Persians.

* Valley defenders will be also be able to access and occupy local high ground easily to give them tactical advantage during actual combat, using interior lines and their greater familiarity with the terrain. Both accessible ground around the valley perimeter (anywhere the enemy could plausibly take advantage of) and slopes near the choke point of the actual battle are subject to this principle. The enemy has to come to them and try to dislodge them from these positions once occupied, which will once again prove extremely costly for the attackers.

The notion that the Orcs might gain some kind of theoretical advantage from being able to occupy the high ground around the valley perimeter seems to completely overlook how, in practice, they are supposed to be able to get themselves there, especially in sufficient numbers to accomplish much, and to assume that the Elves are just going to let them do so unmolested.

If there is any passable terrain in the surrounding mountains, I think we can assume that Elrond, with his thousands of years of experience and residence at that location, will both know about it and make sure to send sufficent guards/hunting parties to cut off any exploration attempts, but it seems equally plausible that there are none, and that this is in fact why Rivendell is situated where it is.

None of this actually rules out magical defense, of course (and we know that the river is under Elrond's command, for a start, which could simply wash away the first wave of any assault), but it does not seem to me that the ability of Rivendell to defend itself is particuarly dependent upon it.

I really enjoy this kind of post -- and the comments, too.

Tangentially, but perhaps relevantly, I'm reading Peter Hopkirk's Trespassers on the Roof of the World: The Secret Exploration of Tibet, and was wondering whether Tolkien's Tûn/Túna might have any debts to to Tibetan place-name Tuna - and today I reached the account of the 5 July 1904 British attack on the 'jong' or "massive fortress, [...] perched on a rocky mound several hundred feet above the plain" where Gyantse was located. How aware of, and attentive to, the British actions in Tibet might the 12-year-old Tolkien have been? They were big news (journalists were present - one carried on after hving his hand chopped off in battle! - and made immediate use of the telegraph line laid as the British proceeded), and many books followed quickly - the first being by the (London) Times correspondent, Perceval Landon, Lhasa (in two volumes - with a University of Toronto copy of the 1905 "Second Edition" scanned in the Internet Archive).

In how far might Rivendell have had ancillary fortifications surrounding the valley, not least on high places and guarding approaches, and holding out more successfully than the nonethless impressive 'jong' of Gyantse?

Following on - what do we know, and what might we conjecture, as to changes in Rivendell's architecture, and its defenses, throughout the course of its history?

@DLD - You are suggesting that Rivendell was once fortified but not longer? Given the close relationship between Gandalf and Elrond; and Gandalf's awareness that Rivendell and the Havens were vulnerable to Sauron - I suppose Rivendell was as safe as it could be in the state that it was when the Fellowship was formed.

Gandalf also said that Rivendell was probably secure *as it was*, except when Sauron himself would come (Frodo - "Is Rivendell safe" Galdalf -"Yes, at present; until all else is conquered".); and it was not being-fortified as the Fellowship left; all of which also suggests that the defenses were primarily magical; much as with Lothlorien.

No, I just wondered what the state of 'defenses' - architectural, general-logistical, and 'magical' - were/might have been (1) before/during the first siege, (2) after the first and before the second siege, and (3) after the second siege - including, for instance what Elrond's coming to bear the ring Vilya may have contributed.

But also, over 4980 years or so (from founding till the events of The Hobbit), what general architectural changes there were/might have been.

In both contexts, a further question is, what interactions might there have been in architectural (and infrastructural) terms between Elven, Half-Elven, and Faithful Exiled Númenórean, with respect to Rivendell and otherwise?

Thanks for all the 'thought-provocation', hereabouts!