What effect did the War of the Ring have on The Shire? 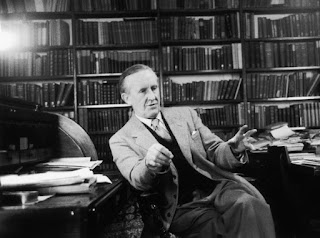 A hobbit in a library...

I have often wondered how many people read the Prologue: concerning Hobbits, which comes before Chapter 1 of The Lord of the Rings.

This gives-away a good deal of the coming story, by implication at least - and it is surely a very strange way to approach a fiction via some 20 pages of descriptive context; before the reader has read a word of narrative!

Yet, apparently it 'works' - for millions of people - as do so many of the strange and counter-intuitive aspects of Tolkien's narrative method.

Anyway; there are many treasures in the Prologue, which continues to surprise me. For instance, its last section - entitled Note on the Shire Records - primarily has the function of providing a feigned historical 'frame' for the narrative.

The Red Book proper is also stated to have contained some of the information included in the Appendices - such as the family trees; and it is said that it was boxed with Bilbo's translations from the Elvish - which we are meant to infer is the basis of what was later published (in excerpted form) as The Silmarillion.

Indeed, Merry is also implied to have been the part-author of some parts of The Lord of the Rings as we know it - for example Appendix B, The Tale of Years, and Appendix D, which is about calendars.

But another aspect of Notes on the Shire Records, which I hadn't properly noticed, concerns the effect of the War of the Ring on subsequent life in the Shire.

I think many people have the idea that - after the Scouring of the Shire - everything returned to normal; and life in the Shire was re-set to how it had been before the arrival of the Black Riders. But this is not the case.

Tolkien tells us that there was an awakened interest among Shire Hobbits in their own history and traditions; and these were collected from oral sources and written for the first time. In the first century of the Fourth Age, several libraries were established in The Shire; by the Took family, the Brandybucks; and at Undertowers in the new Westmarch, where Sam's eldest child Elanor lived with her husband Fastred.

The Buckleberry library was begun by Merry, who himself wrote books on several subjects; including Shire Herblore, Calendars, and the philology of Shire words and names compared with Rohan. So, the Brandybuck library specialized in Shire matters specifically; with a further concern with matters of Rohan.

The library in Tuckborough was of more general scope. Pippin did not write anything himself; but collected works from Gondor concerned with Numenor, Sauron and the history of Middle Earth in general.

This library was thus the (probable!) basis for Appendix B - The Tale of Years - with Merry's assistance. We are told that Merry returned more than once to Rivendell, to consult with the remaining High Elves, including the sons of Elrond; and (probably) Celeborn - who dwelt there for some time after the departure of Galadriel, and was a living link with the Elder Days.

In other words; the result of the War of the Rings was to make The Shire less parochial, more outward-looking. It is implied that the hobbits were somewhat 'ennobled' and raised by their (indirect) contact with 'higher things'.

When Pippin says to Merry (in the Houses of Healing) "We Tooks and Brandybucks, we can't live long on the heights.' Merry responds: "Not yet, at any rate. But at least, Pippin, we can now see them, and honour them... There are things deeper and higher... I am glad that I know about them, a little."

It seems that the two hobbits took this insight back to The Shire, and put it into action. There was a raising of the intellectual level, and an increase in literacy; stemming directly from the links established by Bilbo, Frodo, Sam, Merry and Pippin with elves and men in Rivendell, Gondor and Rohan.

When Frodo conversed with Gildor in the Woody End at the start of the adventure; the elf said about the Shire Hobbits:

"It is not your own Shire... The wide world is all about you: you can fence yourselves in, but you cannot forever fence it out."

The Notes on the Shire Records inform us, that following the War of the Ring, and the invasion by Saruman and his ruffians; the Shire hobbits increased in wisdom, ceased to fence themselves in, and began to take notice of the wide world all about them.

Another evidence of this new orientation: Sam (as Mayor of the Shire) is given the star insignia of the Dúnedain by Aragorn (appendix B, year 1436).

In Unfinished Tales pg. 285, it's mentioned that this gift has been wrongly confused with the Elendilmir, but Christopher Tolkien evidently misses the actual connection to the sheriff-like badge of the Rangers.

I started reading Lord of the Rings last week and didn't read the Prologue: concerning Hobbits.

The preface to The Adventures of Tom Bombadil is a case in point.

"The influence of the events at the end of the Third Age, and the widening of the horizons of the Shire by contact with Rivendell and Gondor, is to be seen in other pieces. No. 6... must be derived ultimately from Gondor... No.6 actually mentions Belfalas (the windy bay of Bel), and the Sea-Ward Tower, Tirith Aear, of Dol Amroth."

I know there are those who find this whimsical or bogus, but exposure to Tolkien's fictional scholarship as a boy whetted my appetite (though I only ever scratched the surface) for the delight to be found in the real scholarship which goes into an edition of Beowulf or the Eddas - the way in which a footnote can open up entire vistas of our Celtic and Germanic past.