Review of The Mikado - by Gilbert and Sullivan 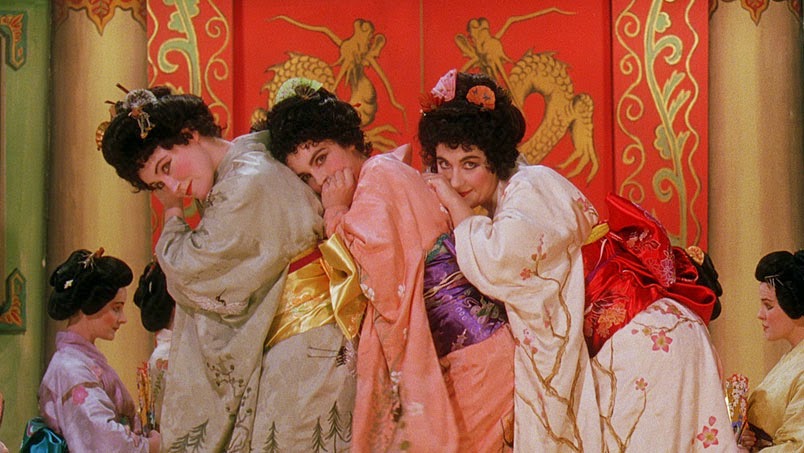 Why is it that The Mikado is the best of all comic operas or musicals?

That it is indeed the best, is the decision of posterity, of audiences - and is in fact true.

The opera is done by amateur societies all over the world, all the time - always pulls in the audiences, and is always enjoyed; is revived professionally and recorded and filmed again and again - and led to the best British movie of recent years Topsy-Turvy (1999) from which the above photograph of the Three Little Maids is taken.

I know the piece very well, having been in it twice and watched it or listened to it innumerable times.

I wouldn't say it is my absolute personal favourite G&S - perhaps that would be Iolanthe, or Trial by Jury or HMS Pinafore (hard to choose!) - but I acknowledge it as the best.

There is so much that is so good. The comic pieces are probably best known - for instance the Three Little Maids or the Mikado's song ('A more human Mikado...") - but the general level of the piece is extraordinarily high.

It starts with a trio of top-notch songs: the striking and witty (and very 'Japanese') Men's chorus"If you want to know who we are" is followed by one of the best known tenor songs "A wandering minstrel I" - which is actually three songs, all very good - two bracketed by the other.

Gilbert's lyrics are at a very high level of wit - with ironies coming so thick and fast that it is hard to absorb them.

But if patriotic sentiment is wanted
I've patriotic ballads cut and dried
For where-ere our countries banner may be planted
All other local banners are defied
Our warriors in serried ranks assembled
Never quail - or they conceal it if they do
And I shouldn't be surprised if nations trembled
Before the mighty troops - the troops of Titi-Pu!

Then comes the musically marvellous (although narratively flawed) high baritone song "Our great Mikado" from Pish-Tush (which role I had the honour of failing to perform to its best, a while back).

Then comes Pooh Bah (the jumped-up, corrupt and arrogant 'Lord High Everything Else') who  is a relatively 'minor' character in terms of plot, but is one of the great and lasting characters of English literature  - and he has just about the best and funniest dialogue of anybody in G&S.

All these tend rather to whizz past the audience - but establish the very high level of the piece as a whole and prepare for the first 'showstopper' of the Little List song from the comic baritone Ko-Ko.

As well as Pish-Tushe's, there are some wonderful and dramatically-effective songs which in any other setting would 'make the show', but here are overshadowed and almost forgotten  - "So please you Sir, we much regret" and "The criminal cried" are such gems (aside: the latter has one of the most enjoyable chorus tenor harmony lines I have ever sung).

Gilbert and Sullivan's genius was working so fluently here that such marvels are tossed-off left, right and centre.

There is a lot of high spirits, nonsense and satire all throughout - but what really puts the Mikado into a class of its own is the way that this is combined so naturally with really lovely lyrical sections of music.

Three examples: The love duet 'Were you not to Ko-Ko plighted' - between the tenor Nanki-Poo and soprano Yum-Yum is (properly done) both witty and laugh-aloud funny- but it ends with a suddenly slow two-part harmony section and a wistful little play-out that suddenly but without over-emphasis reveals that there is a real affection between these two characters.

Yum-Yum's solo, "The sun whose rays" is as good a soprano aria, musically speaking, as an English composer has ever written - in particular, the way in which the deft little touches of extra orchestration elevate the second verse and chorus to new heights.

And this top-notch musicality is matched, phrase for phrase, with wonderful lyrics - that begin as a satire on Yum-Yum conceit at her own beauty - following on from the dialogue in which she says - "Sometimes I sit and wonder, in my artless Japanese way, why it is that I am so much more attractive than anybody else in the whole world."

The lyric deserves quotation in full as it moves from teenage arrogance to a transcendent magnificence:

The sun, whose rays
Are all ablaze
With ever-living glory,
Does not deny
His majesty--
He scorns to tell a story.
He won't exclaim,
"I blush for shame,
So kindly be indulgent."
But, fierce and bold,
In fiery gold,
He glories all effulgent.
I mean to rule the earth,
As he the sky--
We really know our worth,
The sun and I.

Observe his flame,
That placid dame,
The moon's Celestial Highness;
There's not a trace
Upon her face
Of diffidence or shyness:
She borrows light
That, through the night,
Mankind may all acclaim her.
And, truth to tell,
She lights up well,
So I, for one, don't blame her.
Ah, pray make no mistake,
We are not shy;
We're very wide awake,
The moon and I.

The third example occurs in the finale of Act 1 when the genuinely nasty villainess Katisha comes on stage to expose the true identity of Nanki-Poo and claim him as her betrothed. Her interruption is swept aside by a cheerful song, chorus and dance" For he's going to marry Yum-Yum", which unexpectedly winds-down into a freeze of all on stage except Katisha, who sings a short and lovely melody "The hour of gladness" describing her desolate state of loneliness - before the stage un-freezes and she recommences her nasty work.

This is unsurpassed theatrical genius.

I really enjoy these kinds of posts!

I've never The Mikado, but it has a cameo role in one of my favorite movies, Chariots of Fire.