Viewed close-up, life (of course!) has no meaning 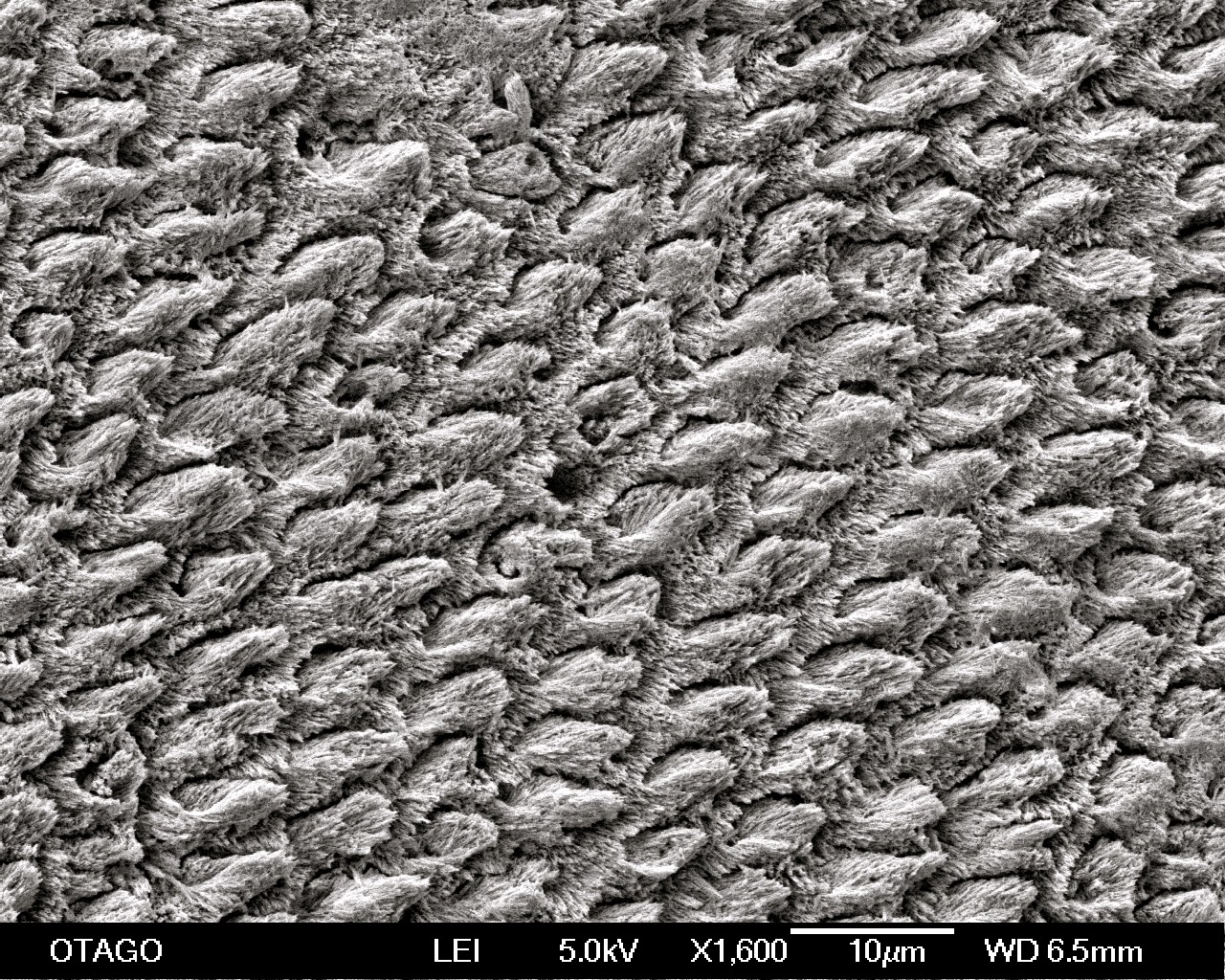 Scanning electron micrograph of a tooth.
Could you discern a tooth's function from this picture?
﻿

Sweet is the lore which Nature brings;
Our meddling intellect
Mis-shapes the beauteous forms of things:
We murder to dissect.

Assuming that Wordsworth is saying that by dissecting (to try and understand a thing) we also murder it (and it thereby becomes meaningless, dead); this applies to the meaning of life: by taking a close-up, microscopic, analytic view we intrinsically strip-out what it means; perhaps without realizing, we destroy even the potential and possibility for us to understand its meaning.

This is a matter of step-wise narrowing perspective, of ingraining this narrow perspective as a habit - of building-in the assumption that the smaller and more detailed the scope surveyed, the surer the knowledge derived.

Thus scientific knowledge (which excludes the divine) is seen as a path to exact validity; biology better than science;genetics than biology; fruit fly genetics than biology - then on-and-on through the ever-more-micro specializations of knock-out fly genetics, the behavioural investigation of knock-out fly genetics, and of particular types of genes... and so on-and-on until we reach modern science which is Balkanized into tens of thousands of autonomous technical disciplines - and has become merely useless, dishonest, bureaucratic careerism.

The same applies throughout all the multiplicity of endeavours - arts, literature, law, economics, theology, academia... pretty much everything.

And - having trained-and-trained ourselves to regard the world in such a fashion - then we complain that life has 'no meaning'!

Yet the meaning of life is only to be seen in the Big Picture.

This world has been set-up to provide the full range of experiences necessary for a human life conceptualized as spiritual learning aimed at higher divinity (i.e. theosis). This reality is only in the Big Picture - and not in the tiny time-slices of momentary life, nor in bits of the world regarded in isolation or one-at-a-time.

Reality is neither ecstasy nor suffering but both - both being necessary to enable us to grow towards becoming Sons and Daughters of God; and insofar as we experience or suppose that life is only one thing, or one half, or one short time - to that extent our knowledge is deficient, and our attitude is thwarting our ultimate goal.

I don't think that life only has meaning in the big picture. What I do think is that changing scale can change how we see something. It can invite projecting onto the thing we see, and it can also invoke our curiosity to resolve what this unfamiliar form actual is. Care has to be taken to stay in the "I don't know" state to investigate honestly, rather than trying to simply apply a familiar template to scratch the itch of our curiosity with an answer.

There are visual examples in changing scales in both directions that make the familiar unrecognizable. If we took your tooth example and looked at it from 1/1600x magnification then it looks pretty unfamiliar - and lacks the meaning we attach to it also.

Not withstanding the above, if we know it is a tooth when we are looking at it, then our previous idea of what is part and parcel of being a tooth expands from looking at it this way. We can see the tooth in a new light, adding knowledge to our familiar and limited view - perhaps even creating a sense of wonder which was not realized from the familiar view.

@NF "Not withstanding the above, if we know it is a tooth when we are looking at it, then our previous idea of what is part and parcel of being a tooth expands from looking at it this way."

Yes - but the point here is that they don't know, indeed deny, that it is a tooth!

In literature, language, and philosophy, this murder is called deconstruction, and it is all the rage these days. We should recognize that, say for the institution of marriage, there is a whole human ecology that cannot be understood by just looking at one thread in the whole fabric of what it means to be a family.

This is perhaps the point of the Greek aphorism "Count no man happy until he is dead." Happiness (eudaimonia) is a property of an entire life, not of any particular slice of it, and cannot be ascribed to a life which is not yet complete.