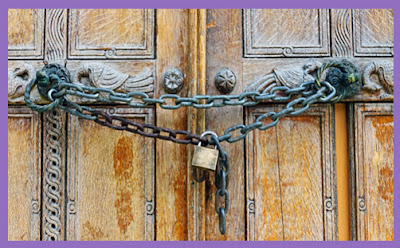 But don't worry - it isn't necessary

A month ago, when I realised what had happened, I wrote: "As a small but significant instance; keep a particular eye on what happens to government regulation of Christian church 'gatherings'..." In the UK churches are shut, and all their significant activities have ceased.

Ergo: Churches have been officially classified as inessential: declared so by the government; and their inessential nature is fully-agreed (without any peep of official resistance, or even reluctance, or demand for time-limit) by the church leadership.

So it is not me who is asserting that Christian churches are inessential: it is the churches themselves.

It turns-out that (according to the churches) Man can live by bread (and plant pots) alone, after all!

Or, at any rate, our essential spiritual sustenance officially does Not require a church.

I defy anyone to explain away the point you have made in this post.

My wife works at a bank and still serves customers all day long. The government even sent her an official letter declaring her an essential worker. On the flipside, no one has seen or heard anything from the local priest in three weeks. Anywhere. Not even at the bank; which is odd because he used to drop in there at least twice a week before the churches closed.

Yep. The churchmen are quiet as a church-mouse.
Not a word from the local priest...

Now here we are: a virus has terminated religion.

I have received nothing but pushback and lack of understanding from everyone but one local pastor on my dismay. That one pastor gets it, but he just isn't ready or willing to risk arrest or infamy yet. He said that day will come, but it's just not yet...

My local priest still heard my confession but chided me into making a financial contribution to the parish.

You know, one of many in the world forced into (by who?) not operating.

I agree with you, but to play devil’s advocate for a moment, one could say that churches have been classified as no more or less important than schools. Most people would say that schools provide a very important, even “essential,” service, but that it is not an *urgent* service — and that the fact that schools can safely be suspended for several months in no way implies that schools are unnecessary.

While many serious Christians are finding out that they're more serious about Christianity than their church, I'm realizing my church might be as bad as me (or at least too close for comfort). It may be time to stop leaning on the institution and take my own salvation more seriously. God willing some good can come of this.

@Wm - In fact, schools for younger kids are still open in the UK for children of 'essential' workers; with a much reduced staffing etc.

But in general, the crisis has shown how very little people really think about the importance of the schools and universities, examinations, arts (theatre, opera, music, dance), museums, book shops, scientific research, live sports etc. Naturally, all of these were kept going - and in a sense thrived) through the 39-45 war, including during the London Blitz bombings.

To me it has been a sad confirmation of the extreme, increasing and pervasive *demotivation* that I have been ranting about for the past decade; including the feebleness of religious faith.

Well of course they're inessential; they don't contribute to the Great God of The Economy!

@MT - Of course, for several decades, the Archbishops and Bishops have talked more of the economy than anything else - except politics, of course.

We went thousands of years without them! Of course they're unnecessary.

(The real push back with schools isn't about students not learning whatever-they're-teaching-in-schools-nowadays. It's that parents have been inconvenienced. The core feature of schools is that they baby sit kids, and since essential workers can't be both working and looking after their kids at the same time, schools for *essential workers* become essential.)

This is a shock, but not a fatal shock, for an Evangelical or any non-denominational Christian.
But for Catholics, Orthodox, and even some liturgical protestants, this is an abomination. If you believe that it is in the Church that you can take part in the Body of Christ, you are left unmoored, excommunicated through no sin of your own.