The old "Put down your gun and step away!" trope 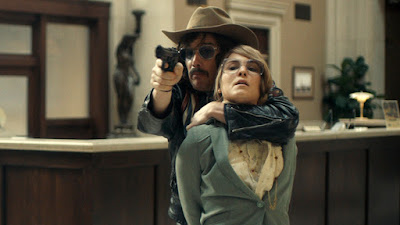 Would you trust this man to keep his word?

According to the indispensable TV Tropes:

Classic variant of the Hostage Situation. The villain has a hostage in his grasp, and a gun pointed at said hostage's head. The hero(es) barge in with guns out. Villain tells the heroes to get rid of their guns or the hostage gets it. ("Kick them towards him." "Put them down and step away." etc.) The heroes will do exactly that, and it's usually only a stroke of luck that saves them from the villain just plugging them right then and there...

The main problem with the situation is that the hostage taker, barring the occasional ones who are willing to give their life, doesn't want to shoot the hostage much more than the heroes do. If they were to kill the hostage because the heroes refused to drop the guns, there is suddenly nothing to keep the heroes from using said guns. However, the characters almost never think this through.

...Real-life police and military forces train their people to never put down their guns in a hostage situation, because if you do you'll just end up with a dead hostage and a dead hero.


Why do I mention this? Well, the villain is an evil-motivated liar - someone that we know-for-sure cannot be trusted. Someone like - oh, for example - politicians and the mass media.

The primary stupidity of the 'put down your gun and step away' trope is that - suddenly, for no good reason and in face of the fact that the villain is actually (here and now, currently) behaving in an obviously evil, dishonest and untrustworthy fashion - the hero disarms.

Yes, the stupid, stupid, stupid hero surrenders all his protections, gives all the power to the villain... simply because the villain says he will (from now onwards) behave with decency and integrity.

I trust you understand the point I am making? Indeed.

Two hours later... I *knew* I should have resisted the temptation to click on a TV Tropes link!