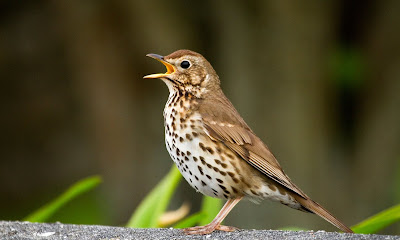 Although the curlew, lapwing/ peewit and lark are the most evocative of our moorland birds; for me our best songbirds are blackbird, nightingale and song thrush - we have plenty of the first two but I have neither seen nor heard a song thrush for some years.

But they're back! I saw one the other day, and we have an exceptionally 'fruity' voiced singer in our back garden; a real virtuoso - loud, sweet-toned, inventive.

Oh, to be in England
Now that April's there,
And whoever wakes in England
Sees, some morning, unaware,
That the lowest boughs and the brushwood sheaf
Round the elm-tree bole are in tiny leaf,
While the chaffinch sings on the orchard bough
In England—now!

And after April, when May follows,
And the whitethroat builds, and all the swallows!
Hark, where my blossomed pear-tree in the hedge
Leans to the field and scatters on the clover
Blossoms and dewdrops - at the bent spray's edge -
That's the wise thrush; he sings each song twice over,
Lest you should think he never could recapture
The first fine careless rapture!
And though the fields look rough with hoary dew,
All will be gay when noontide wakes anew
The buttercups, the little children's dower -
Far brighter than this gaudy melon-flower!

I've never commented before, but thank you for everything you do here. Your blog has been an outpost of sanity throughout current events. My favourite poem (and possibly poet) on this kind of theme is Adlestrop, by Edward Thomas:

Yes. I remember Adlestrop—
The name, because one afternoon
Of heat the express-train drew up there
Unwontedly. It was late June.

The steam hissed. Someone cleared his throat.
No one left and no one came
On the bare platform. What I saw
Was Adlestrop—only the name

And willows, willow-herb, and grass,
And meadowsweet, and haycocks dry,
No whit less still and lonely fair
Than the high cloudlets in the sky.

And for that minute a blackbird sang
Close by, and round him, mistier,
Farther and farther, all the birds
Of Oxfordshire and Gloucestershire.

Beautiful songbird. Such a joy to hear.
I remember planting a hedgerow in a Swedish churchyard. Given to understand that the song thrush is not normally gregarious, I usually only see them alone, but out of nowhere dozens appeared, united, tiny spitfires chasing a giant crow, courageous little things. I imagine he’d been at one of their eggs. Made me think of the people of my beloved England. A house divided against itself, that cannot stand. A people who have lost their identity, who no longer know who we are, with no common purpose. But a sudden black swan moment and these brave little solitary fellows, knew exactly who they were and which side they were on. They were united. It gave me hope.
I’ve been waiting for such an event for a long time now. A threat, that forces us to unite and become a people again. Five decades of politically correct, divide and conquer indoctrination, dissolved by a flash of lightening.

@Sean - "I’ve been waiting for such an event for a long time now."

IMO it will never happen, unless we re-find Jesus Christ - each for him-self; lacking which we are, en masse (I'm sorry to say) a despicable bunch of gullible and demotivated cowards.

(Other than *that*, we have many good qualities!)

BTW you always post an identical comment twice, with the same timing - and nobody else does; so you seem to be doing something wrong (or, at least, unneccessary) at your end.

@David - Thanks, good poem. My favourite poet, Robert Frost, regarded EF as his only real friend - although it was a brief friendship terminated by Thomas's death in the war. I read a good partial-biography of Thomas called Now All Roads Lead to France, by Matthew Hollis.

I find a large proportion of Browning's work difficult to tolerate, and certainly not enjoyable. Perhaps too many proto-modernist tendencies and attempts at cleverness for its own sake creep into his more "serious" work for my taste, and what I know of his personality evokes a certain repugnance too; I suspect we would have swiftly developed a strong mutual antipathy, had we met in person.

I've always enjoyed this poem, though. Perhaps its theme has a particular personal resonance for me now, since I relocated to the tropics (and seeing how things are going lately in the land of my birth, am growing increasingly unenthusiastic at the prospect of return). But the poem appealed to me long before this. It's the only complete Browning poem I ever bothered more-or-less committing to memory, too. (The Ring and the Book contains some fine, even inspired passages, but taken as a whole contains too large a dose of repellent Browning-ness for my taste.)

I forgot what I was intending to say about birds when I made the previous post (tiny daughter jumping on me and wanting things when I was trying to type did nothing for my attention span).

I used to see (and especially to hear) plenty of song thrushes around where I lived in Gloucestershire some years ago, which also happened to be the when I first came across the Browning poem. So far as I remember I received a practical demonstration of the repetition he mentioned from one perched outside my window, in the overhanging branches of the neighbour's enormous magnolia tree, an hour or two after first reading it, leading me to think "Ah, yes, that's the culprit!" I've always enjoyed stealthily watching their distinctive snail-bashing antics, too. Nightingales seemed to be a real rarity around there though - I very rarely encountered any, unlike Bruce.

Plenty of birds twittering away here every day, but I do rather miss their British counterparts for their sweeter voices (at least, memory, which nostalgia may cause to be fallible, tells me they were far sweeter than what I am now accustomed to hear). The local songbirds all seem rather shrill, harsh, and sometimes ear-splittingly loud, by comparison.

Even the smaller finch-type specimens (not all of which I can identify, but include bananaquits and canary-like saffron finches) tend towards raucousness, but the real masters of racket-making are certain larger, approximately blackbird-sized songbirds such as the yellow kiskadees and the deceptively humble looking little brown ovenbirds, who can unleash some truly blood-curdling sounds when they have a mind. (Wikipedia officiously tells me the latter should be called a "Hornero" in English after the Spanish word for their impregnable clay-oven-like nests, which I am certainly not going to use as the equivalent Portuguese word here would be "Forneiro" or "Forno" - which is in any case not what they are called, but the inadvisably translatable João de Barro - John of the Dirt/Dirty John.)

Even louder and harsher are the wild parrots of several different, but all equally noisy kinds, a small flock of whom sometimes like to come and screech their feathered heads off on our roof or the neighbour's trees at dawn. This helpfully sets off our usually quieter tame ones who apparently think they are greeting their long-lost friends, and the combination is almost guaranteed to wake up sleeping children and put them in a bad mood. Not really so much a dawn chorus, as a dawn pandemonium!