Notice of The Penultimate Truth, by Philip K Dick (1964) 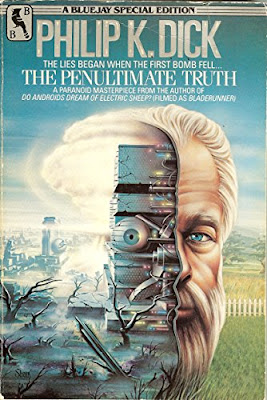 I've just read The Penultimate Truth by Philip K Dick (from 1964), which I had not previously bothered-with - due to having read some rather adverse/ lukewarm reviews. But it turns-out the reviews were mistaken: I thought this was an excellent novel - one of PKD's best.

It is not giving away any great plot points to reveal that the set-up is a post-world-war society where most of the human population are kept below-surface in 'ant tanks' where they live in miserable and crowded conditions, manufacturing robots which they believe are necessary for the ongoing war on the radiation-devastated planet surface (which they believe to be uninhabitable by humans).

In reality; there is an aristocracy of 'Yance-men' living on the planet surface, who use these robots as labourers and domestic servants; and whose main activity is producing the 'fake news' to convince the underground dwellers to continue their closed-in, crowded, toiling lives.

In essence this is a world (exactly like ours) that is based on a Big Lie; and there is a recurrent discussion and analysis of this idea from Goebbells. In this world, the Nazi propagandist's expertise is regarded as exemplary, and taken to a high level of 'artistry' and effectiveness.

With a Big Lie, the lie has become so big that people cannot believe it could possibly be a lie; and they will ignore all kinds of detailed discrepancies in 'the narrative' fed to them, because the idea that they are living a total lie is simply beyond belief.  This bigness is indeed vital to success - because lying always involves discrepancies and errors; so that - in the end - a Big Lie is the only kind of lie that can be permanent and compelling.

The novel is all about this matter of deliberate, calculated lies and deceptions; and the motivations/ rationalisation behind them - the strange mixtures of self-seeking (power and luxury) and self-sacrifice (loneliness and isolation) that the Yance-men life entails; the ways they are both villains and martyrs. Indeed, all the point-of-view characters are broadly sympathetic, we can identify with them - to some extent.

The title of 'penultimate' truth seems to be a reference to the fact that even when the Big Lie is penetrated, we never seem to reach an ultimate truth; the knowable truth always seems to be incomplete, and the final answers (at least) one step further away...

Anyway, I would recommend this very highly; as being absolutely relevant to our present global situation; one of the most intelligent and deep 'dystopian' novels that I've encountered - with that instant memorability and iconic quality of 1984 and Brave New World - but much better-structured, more gripping and enjoyable to read.

"I remember reading this when I was in the Army, and being blown away by it. It's been awhile, but if I'm correct, a man from the underground sneaks above (...spoiler deleted)."

"I always wondered at what the title meant; your idea seems plausible. In this era of "deep fakes," and CGI advanced even beyond what Dick probably expected (he saw dailies from "Blade Runner" but died before it was completed), I'd hazard it would be pretty easy to pull off something like the Yancy men did."

@Sonny - Glad we agree on its quality.